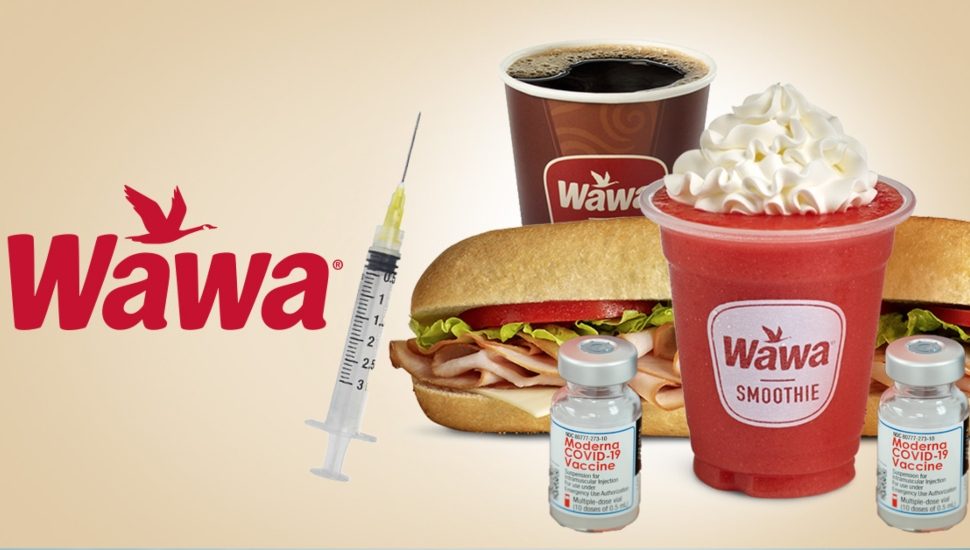 Editor’s Note: The following story about Wawa administering COVID-19 vaccines is meant to be an April Fools’ Day joke.

After a year of hunkering down at home, masking, distancing, sanitizing, and trying not to touch their faces, many Americans are wondering if we’ll ever see the end of the COVID-19 pandemic.

But the end may happen sooner than you think, thanks to the folks at Wawa Food Markets.

The good news came yesterday during a virtual news conference given by Wawa executives and medical staff.

“Wawa is happy to announce that starting April 1st, every one of our Wawa stores will be administering the COVID-19 vaccine to customers in our deli departments,” said Christopher Wawa, the company’s CEO and the great-grandson of its founder, Jebediah D. Wawawitz, who opened the first Wawa store in 1924 after discovering that he couldn’t buy Doritos or Diet Pepsi anywhere in the quaint, historic town of Folsom, Pennsylvania after eight p.m.

“With stores on almost every street corner in the Middle Atlantic states and Florida, we decided that we were in the best position of anyone to get this vaccine into people’s arms and get America out boogying again.”

While vaccines to stop the spread of the Coronavirus were developed by pharmaceutical companies in record time, the effort to get all Americans vaccinated has been frustratingly slow.

That’s about to change, according to Mr. Wawa.

“We have officially declared the month of April as ‘Wawa Vaccinefest,” said Wawa. “It’s going to be every bit as cool as our annual Hoagiefest celebration, only you’ll get a shot of COVID vaccine instead of a hoagie out of it.”

As a marketing tie-in with the vaccine effort, the company plans to offer a number of COVID-themed sandwich specials during Vaccinefest, including “The Dr. Fauci,” a special Italian hoagie with extra Brooklyn-cured ham.

He also said the company will have new T-shirts for all of its “associates” to wear, printed with the Vaccinefest logo on the front in psychedelic 1960’s style, and a giant virus with a Wawa hypodermic needle stuck in it in full color on the back.

While a number of national drug store chains have already been administering the vaccine, this is the first known instance of a convenience store chain doing it.

“What most people don’t realize is that this isn’t our first foray into the medical field,” said Heimlich. “We’ve been selling Excedrin, Tylenol and condoms for years now in the medical section of our stores, and we don’t see this as being much more complicated than that.”

Heimlich went on to talk about the extensive training that Wawa’s deli department employees have undergone to administer the vaccine.

“Each and every one of our deli associates has had a full hour of training giving the shots, and each one has had to successfully inoculate a grapefruit before we would certify them.”

Asked if this might be too little training to administer a vaccine into actual human beings, Heimlich demurred.

“Those people who take your blood at the local blood labs? Twenty minutes of training, tops. And maybe a video to take home.”

One scientific breakthrough that has allowed Wawa to step up and perform this critical medical function was the discovery by virologists and vaccine experts that not all of the COVID vaccines need to be kept at super-low temperatures in order to retain their potency, as was originally thought when they first came out.

“The folks at Pfizer figured out that their vaccine can actually be kept at the same temperature as provolone cheese and still retain its potency,” said Dr. Heimlich. “So we just keep it in our deli case, right under the provolone.”

Another concern expressed by some is the question of what the Wawa deli vaccinators would do if one of the people they give the vaccine to has a serious reaction to it.

Heimlich insists that they have this covered.

“Most of your medical facilities have epinephrine injections on hand in case of a severe allergic reaction,” said Dr. Heimlich. “We’ve got better: Red Bull and Monster energy drink. Chug a can or two of each and your body will be fired up like a Maserati.”

He added that unlike with epinephrine injections, no prescription would be necessary for these remedies, and Wawa vaccine customers will each get a 10% off coupon that can be used toward the purchase of stimulant beverages.

Many public health experts have cited fear of getting a serious reaction as the main reason why some Americans are hesitant to get the vaccine. But Dr. Heimlich quickly discounted such fears.

“Look, three or four people a year choke to death on Tastykakes, but you don’t see us getting rid of Tastykakes, do you? You know what they say: When they outlaw Tastykakes, only outlaws will have Tastykakes.”

When asked what the company’s next big expansion idea would be, Mr. Wawa smiled.

“Can you keep a secret? We’re going to be handling the voting for the 2022 election. They just did a study and found that our deli ordering computers are about one hundred times more reliable than the voting machines the state’s been using. You’ll just vote on the touchscreen and have a paper receipt come out in half a second. Plus, you can order a burrito and a caramel mocha macchiato at the same time.”

Asked if he was concerned that the public might not trust convenience store deli machines to tally their votes in an important election, Mr. Wawa shook his head.

“Not at all. Because everybody trusts Wawa.”

Barry Rabin and VISTA Today wish you a Happy April Fools’ Day! Barry welcomes your comments at rabinwrites@aol.com. The quotes in this article were made up for satirical purposes, and some of the people quoted don’t even exist!