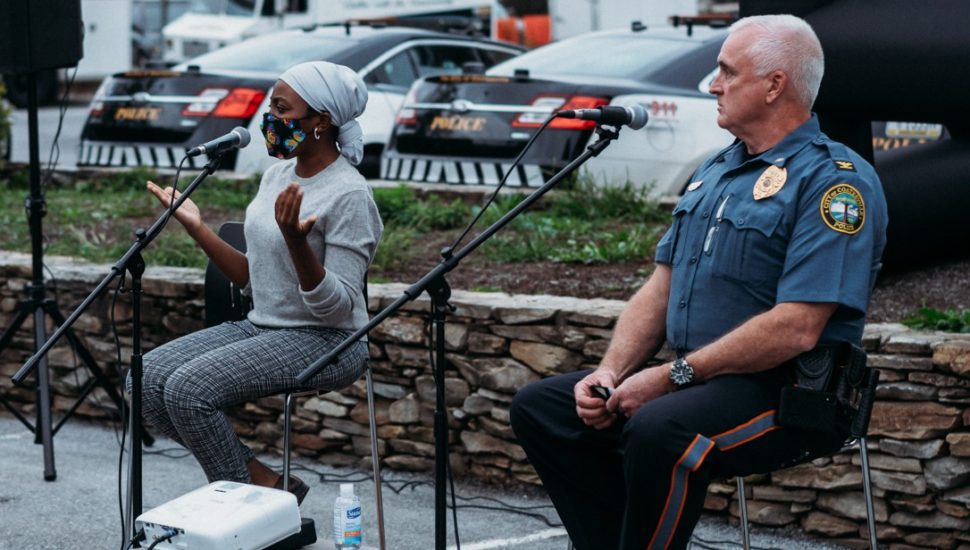 As calls for police reform and sensitivity training have become a nationwide outcry, the City of Coatesville Police Department has taken an existing community engagement initiative a step further by blending time-tested training with new, community-focused training to address some of today’s most pressing needs in urban policing.

“During my eight-year tenure as Chief, we have underscored the importance of officer training, education, and community involvement,” said Jack Laufer, City of Coatesville Chief of Police. “The national narrative calling for additional officer training has placed a greater emphasis on what we have been doing all along, but with focus on issues that have come to the forefront: de-escalation, implicit bias, and law enforcement ethics training.

“2020 has been a tough year for businesses, families, and individuals, and the stressful environment magnifies many issues. Our programs provide the training, tools, responses, and options to help officers de-escalate and diffuse stressful situations safely. City Council has supported and encouraged our police department to explore training to create an atmosphere of community.”

“He knows our community, our views, and sensitivities,” she said. “These are trying times, and City Council is appreciative of the police department’s open-door policy. If there is an issue, residents will be heard.”

Sceola Wesley-Bailey, a married mother of four who resides in Coatesville and runs the Chester County Mega Squad (CMS) gym, spoke of the need to build an environment where residents feel comfortable and confident when law officers are nearby.

“We need to get to know each other,” she said. “Chief Laufer is providing officer training and inviting residents to reach out to him if they want to talk. Officers are doing their part by introducing themselves in the community. Officer (Rodger) Ollis will be visiting our gym, so children and their parents can get to know him, and he’ll answer questions about the police department. These are steps in the right direction, which often start by offering a simple smile and ‘hello.’”

A 26-year veteran with the Pennsylvania State Police, with the rank of major, Laufer served as Director of the Bureau of Training and Education for five years. He holds a master’s degree in criminal justice and has served as an adjunct professor at Delaware County Community College and Wilmington University, where he remains on the Criminal Justice Advisory Board.

“Every community wants to know that individuals will be treated fairly by officers, without incident,” said Laufer. “We take that responsibility to heart and are taking the initiative to build relationships and provide thorough and constant education and training for our officers.”

Each year, all officers participate in two days of continuing education through Act 180 re-certification provided by the Municipal Police Officer’s Education and Training Commission, which provides legal updates and instruction that focuses on issues at the forefront of policing.

Four supervising officers have completed the intensive three-week Leadership Development Program, which Chief Laufer helped create and taught at the State Police Academy in Hershey prior to his retirement from the state police. In November, Chief Laufer completed the four-day “Train the Trainer” certification course taught by the Dolan Consulting Group to enable him to present de-escalation techniques training. Over the next three months, he intends to teach the techniques to the entire staff of 29 full-time Coatesville officers and about a dozen part-time officers.

The department has also partnered with the city in numerous initiatives to strengthen relations with residents. In June, Chief Laufer partnered with members of the Coatesville City Council and City Manager James Logan to greet and converse with concerned residents and individuals who participated in a peaceful Black Lives Matter demonstration. This summer, Chief Laufer partnered with Coatesville City Council member Nydea Graves and Logan to kick off “Real Steel Talk,” a forum created to bring together voices of the community to city leaders.

“We pride ourselves on being champions of the community … partnering rather than policing,” said Laufer. “Every officer is expected to be the face of our department. While five officers, three receptionists, and three administrative staff are graduates of Coatesville High School, we want to make sure that every member of the department knows and understands what makes the city and people of Coatesville great.”

Over the last four years, “Coffee with the Chief” has enabled community members to join Laufer to discuss issues important to them at different business locations throughout the city on the first Wednesday of every month. Although the popular program has been temporarily suspended due to COVID-19, in an effort to maintain engagement, Chester County District Attorney Deb Ryan introduced a pilot program to identify some of the sensitive issues with residents and the police department. In a roundtable format, the district attorney’s office brought together five police department members and five community members with a facilitator to take a deeper dive in identifying prominent subjects for discussion.

“It’s a tall order for officers to be able to recognize the nuances inherent with a diverse community,” said Carmen Green, Coatesville City Council Vice President. “Officers must have the tools and skill sets to be able to interpret and address a variety of situations. Chief Laufer’s proactive approach assures our residents are being heard and officers are receiving the necessary training. He and the officers have a deep commitment to do the right thing all the time. That builds the trust, cooperation, and strong relationships that we all hope to achieve.”

“As we listen to concerns voiced in cities across the country and in our own neighborhood, we want to assure residents that we are listening,” said Logan. “We understand the value of training, education, and outreach and recognize that there is room for improvement for our city and police department. Our residents and officers must learn to coexist, and in order to do that, we must lead with mutual respect for one another. We are committed to measure progress and modify programs to sustain our efforts. It is this kind of collaboration that will keep Coatesville at the forefront of change and retain the true meaning of community engagement.”

Government & PoliticsJoin Free Webinar on Feb. 26 to Learn How the U.S.-Mexico-Canada Agreement Could Impact Your BusinessFebruary 22, 2021