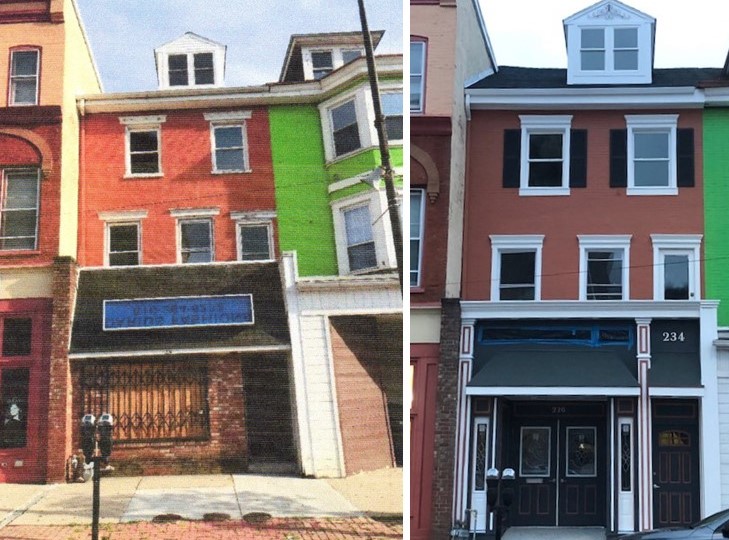 The before and after photos of 234 East Lincoln Highway in Coatesville.

Created as just one part of its downtown revitalization strategy, the program is funded through the Pennsylvania Department of Community and Economic Development’s Neighborhood Partnership Program. A state tax credit program, private donors contribute to the 2nd Century Alliance in exchange for state corporate tax credits.

“The façade improvement program is just one component of a comprehensive, six-year plan to turn downtown Coatesville around,” said Sonia Huntzinger, Economic Development Administrator for the 2nd Century Alliance. “But it’s the first – and an important – step in improving the aesthetics of the commercial district.”

Recognizing that it takes some time to revitalize a commercial district, donors Hickory Bark, LLC and Knox Equipment Rentals have committed to underwriting the organization’s downtown revitalization plan for a consecutive six years.

“We’re proud to be able to award $22,500 toward more than $50,000 in building improvements in order to preserve and improve some of our downtown storefronts,” said Huntzinger. “We hope to capitalize the fund again in 2021 and do a few more.”

Some of the funds went to preservation efforts – repointing brick facades and addressing peeling paint. The Dantzler property at 234 East Lincoln Highway shows the most change. Not only are they restoring their storefront façade, but they have completely rehabbed the building’s interior in order to welcome a new café business.

“We wanted to be a part of the change and growth in downtown Coatesville,” said Dantzler. “It has been a dream of ours to bring a unique live entertainment and dining venue to the city. The 2nd Century Alliance grant was a welcomed incentive and has helped to make our dream a reality.”

The City of Coatesville also offers a Local Economic Revitalization Tax Assistance (LERTA) program, whereby property taxes on any improvements can be paid incrementally over time.

The Coatesville 2nd Century Alliance was formed in 2015 when Coatesville celebrated its 100th anniversary as an incorporated, third-class city. It is comprised of stakeholders that represent the community, working together to ensure Coatesville’s next 100 years are economically sound and prosperous.