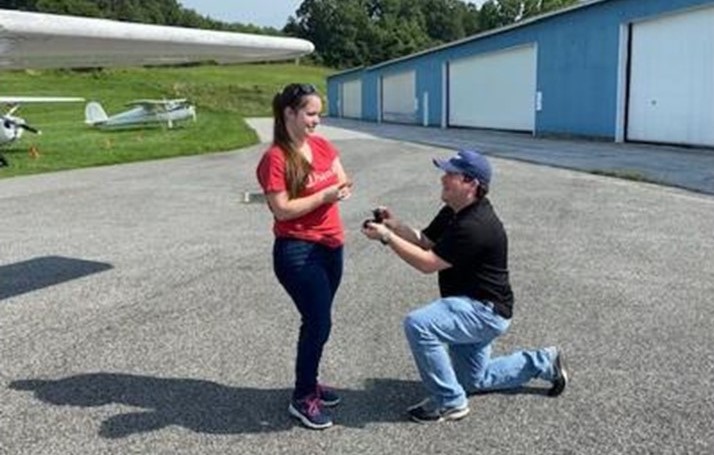 Scott Robinson surprised his girlfriend Emma Willis last week by taking a knee on the runway of the New Garden Flying Field and asking her to marry him, writes Fran Maye for the Daily Local News.

The couple boarded the Cessna 172 airplane at New Garden to take in the beautiful countryside and maybe throw in a little flight instruction for her – or so she thought. She did not expect the life-changing moment that arrived after the flight.

Robinson and Willis recently moved to Chester County from Texas, following Robinson’s job as a dispatcher for Eastern Airlines. The flight was an ideal opportunity to scout out the area.

When the plane landed at New Garden, Robinson asked Willis to go through the post-flight checklist. As she was doing that, Willis saw her mother on the runway and thought it was odd, but she continued reading the questions.

The last one was a true surprise: “Will you marry me?”

Robinson got down on one knee and took out a ring. The answer was a resounding yes.

Read more about the proposal in the Daily Local News here.

Pandemic Did Not Dissuade Local Couple from Keeping Wedding Date

FamilyNew York Times: Author, Renowned Transgender Activist from Devon Who Lost Her Father on Easter Finds His Spirit All AroundApril 13, 2021

FamilyWest Chester Girl, 9, Gives Back to Charities That Supported Her Family During Her Father’s Cancer FightMarch 28, 2021