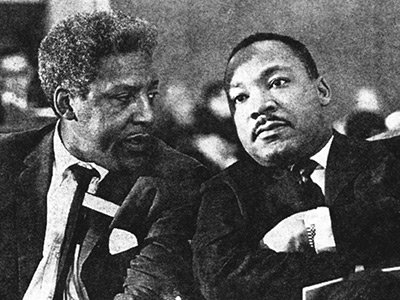 After years as an invaluable part of the Civil Rights Movement, West Chester native Bayard Rustin turned his energy to fighting for LGBTQ rights, writes Dennis Hinzmann for Out.

Born in 1912, Rustin grew up with a mind for activism and civil rights thanks to his mother who was a member of the National Association for the Advancement of Colored People. This meant the organization’s leaders such as W.E.B. Du Bois and James Weldon Johnson often visited their West Chester home.

Rustin became an activist early on, campaigning against the Jim Crow’s racially discriminatory laws of the South. But he is best known his contribution to the 1963 March on Washington.

He began fighting for gay rights later in life, after being arrested for having sex in public with male prostitutes.

In a 1986 speech Rustin said that the gay community would be the next to gauge the direction of social evolution. In an essay the same year, “From Montgomery to Stonewall,” he recognized the spark in the Stonewall Riots was similar to the one that flickered with Rosa Parks.

“That was the beginning of an extraordinary revolution,” he wrote.

Read more about Rustin’s legacy at Out here.