As It ‘Transitions into an Exciting Future,’ C&N Announces Changes to Board of Directors 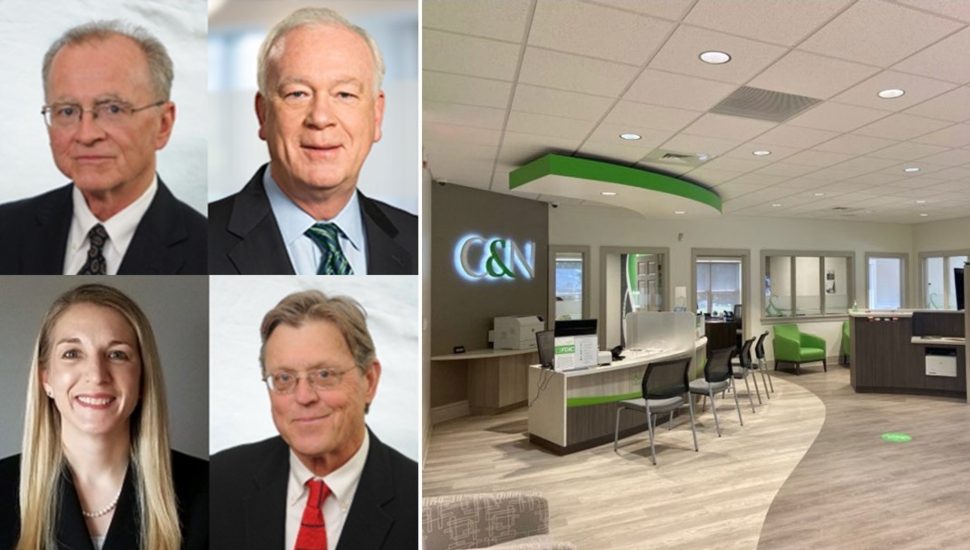 C&N, a community bank with full-service offices in nine counties in Pennsylvania, including Chester and Bucks counties, has announced changes to its Board of Directors.

The Board has appointed Terry L. Lehman as Chairman. Effective May 1, Lehman will succeed Leo F. Lambert, who has served in that role since being appointed in 2014. Lambert, who has been on the Board since 2001, will continue to serve as a Director.

Lehman has been a Board member since 2016 and is a retired CPA with more than 35 years of experience in public accounting and private industry. He brings extensive experience, much of which has been concentrated in work for and on behalf of financial institutions and public companies, to his new role.

“It’s been an honor to serve as C&N’s Chairman through our recent growth and expansion,” said Lambert. “It is time for a transition, and I am confident in Terry’s leadership as we move into an exciting future. He brings a wealth of success and strategic thinking to our organization, which will be critical as we continue to scale and adapt to changes in our industry and evolving customer expectations.”

The Board also appointed Helen S. Santiago as a Class II Director, filling the vacancy created by the retirement of Director Leonard Simpson. Santiago will join the bank’s Audit Committee and the Trust Committee and fill the unexpired term of Simpson until the 2022 Annual Meeting of Shareholders, when she is expected to stand for election.

Since 2009, Santiago has served as a CPA for LaBarr & LaBarr, LLC in Sayre, Pa., where her focus is income tax preparation, tax planning, and financial statements. She previously worked for KPMG in Philadelphia for seven years, earned her CPA license, and served as an auditor before being promoted to Senior Accountant.

“Helen is a well-respected, local professional with a strong background, bringing unique expertise to an already strong Board of Directors,” said Lambert. “We are pleased to welcome her to the C&N family and look forward to seeing the impact she will make.”

Since joining C&N’s Board in 1989, Simpson chaired the bank’s Trust Committee and served as a member of the Compensation Committee, Executive Committee, Finance Committee, and Governance & Nominating Committee. He has been an attorney since 1975 and was elected as Sullivan County District Attorney from 1977 through 1993 and from 2008 until present.

“On behalf of C&N’s Board of Directors, I thank Len for his 32 years of valuable service, leadership, and contributions to the company,” Lambert said. “We wish him good health, happiness, and prosperity in his retirement.”

In addition to his ongoing service on C&N’s board, Lambert has been President and General Manager of Fitzpatrick & Lambert, Inc., in Dushore, Pa., since 1978. His contributions as a Board member have been invaluable – he was a member of every committee at various times during his 20 years on the Board.

“We are deeply grateful to Leo for his vision, dedication, and leadership over the past 20 years,” said Brad Scovill, C&N’s President and CEO. “His commitment helped to transform C&N during that time, and we look forward to his continued guidance as a Director and colleague as we pursue further opportunities for growth.”

Banking & FinanceMalvern Bank on Nonprofit Fundraising: Do You Have the Right Partnerships?June 18, 2021