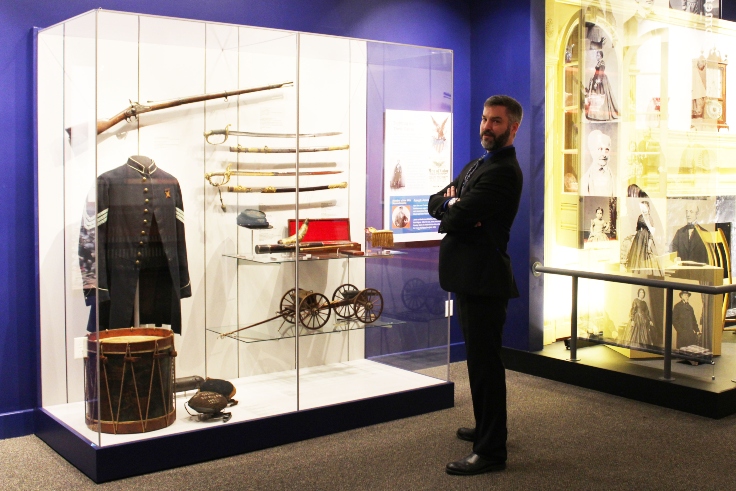 Publisher’s Note: As you enjoy Conor’s profile, please note the Chester County History Center needs the support of the community now more than ever. Every donation made or membership sold helps CCHS grow and continue offering programming during these challenging times.

Conor Hepp, President of the Chester County History Society, spoke with VISTA Today about growing up in Media and his childhood fascination with all of the museums Philadelphia has to offer, an important lesson he learned at his first job, his choice to attend West Chester University, and his passion for history.

Hepp also discussed what attracted him to the Chester County History Center and the challenges and opportunities that lie ahead for the nonprofit tasked with collecting, preserving, exhibiting, and interpreting the history of Chester County and its relationship to the region and nation.

Where were you born, and where did you grow up, Conor?

I was born the youngest of two children in 1980 in Media, Delaware County’s county seat, and grew up there.

What did your parents do?

My father was a reporter for the Philadelphia Bulletin and then the Inquirer. My mother, Hope, was a paralegal in an office in Media.

What memories do you have of growing up in Media?

The one thing that I remember the most about growing up there was my mother taking my sister and me to museums when she was a stay-at-home mother.

We lived near the Wallingford train station and take the train into the city. Some days we would drop in on my dad at work, but more often, we’d visit the Academy of Natural Sciences, the Franklin Institute, the old Please Touch Museum, and others.

Did you have a favorite museum?

I liked the Franklin Institute, of course. I also loved the Penn Museum. They had a lot of great things there.

I was at a meeting at the Penn Museum a while back, and the museum had just won the “Best Hidden Gem” award in the nation. And the Director at the time, Richard Hodges, said, “this is wonderful, but I would rather be the number one gem that everyone knows about.”

What impact did those museums have on your sister and you?

It made me want to learn more. Museums give you a sense that everything is in front of you – history, science, art – everything is tangible.

For me, it makes it more real, and I always wanted to know more. I’d ask questions about what I just saw and then further investigate it. My mother would then take me to the Media library for more learning and research. Those museums brought history to life for me.

Did you have any jobs growing up?

My first unofficial job was selling gum on the school bus. I learned at an early age that I could make a little money doing that. My first official job was working as a busboy and dishwasher at LaForno’s, a local pizza place.

What lessons did you learn in that job that remain with you today?

Well, selling bubble gum, I learned that you can find a way to make money doing anything if you know your audience.

The dishwasher and busboy job taught me the most important lesson: respect everyone – from the CEO to the janitor. Everyone plays a part in the team, and the team can’t function unless everyone is on board. I also learned that I was catering to people who were grateful and who were not appreciative and how to adjust to those different attitudes.

Did you play any sports in high school?

I was never a big child in height or weight. I was small and quick, which I used to my advantage and played soccer. I was a decent player. I liked playing defense because I liked the idea of stopping a player on a break-away. There was something noble about that role in my mind. I wasn’t really interested in scoring goals but more so the protection against them.

What kind of music were you listening to growing up?

All kinds of music. I was raised on the Beatles and the Rolling Stones, which turned to punk and rock throughout the 1990s.

I liked Pennywise and Bad Religion in the early punk days and then Rage Against the Machine and Tool later on.

Where did you end up going to college?

I went to West Chester University. I really enjoyed the campus atmosphere and the downtown area of West Chester. It was a fun place to be. I had friends who were a few years older, and when I would visit, I just knew I would fit in well.

I considered going out of state and looked at a few colleges, but I just loved this area. I’ve always been a family person, so I knew I wanted to stay close to my family in Media.

Looking back on your experience, was West Chester University a good choice for you?

I’ve never left the West Chester area afterward, so yes! It gave me the drive to get a job in my career. When I came to West Chester, I immediately knew I wanted to go to school for history. I loved what I was learning, so I knew my goal was to get a history degree. It also inspired me to begin looking for work in museums while I was in school. I was able to get a job selling tickets at the Franklin Institute.

Do you have a favorite historical period?

It changes. I started with American History, then I went to Judeo Christian which led to Roman history and then the ancient world. Every few years, I switch because I get fascinated with something new.

We have to tell stories of history to show that we can make it through any time period. Life goes on, and it gets better.

After college, who were the people who saw promise in you?

My mother, of course. You can’t make it very far without a strong parent behind you, thinking you can do anything in the world.

I also worked at Iron Hill Brewery when I was at West Chester, and I saw the girl I was going to marry on my first day. She is now my wife, Collen, and is incredibly supportive of me and everything I do.

The teams that I have been lucky enough to work with throughout my career have pushed me and helped me accomplish so much. When I transitioned from the Franklin Institute to Penn, I had seven teammates follow me to Penn throughout the next year. They were very supportive and very accomplished. Some are still there, and some have gone on to other things.

How did you find out about the opening at the Chester County Historical Society in West Chester?

It was actually shared with me by my mother! I have always been a huge fan of the Historical Society when I came here to college to now. I started coming to the CCHS in college to learn about the organization itself. I thought knowing how a local historical society works would be a good way to start my career. When I graduated from college, got married, and had a family, I would bring my kids back here to see it from an early age. When my mom showed me the position, I knew I wanted to come back here.

Looking forward Conor, what are CCHS’s opportunities and challenges?

The staff here has done an amazing job with the organization. They have gone through the process of getting all of the galleries redone. As of September, the organization will have its first new, permanent gallery in over fifteen years. It looks incredible and will really propel it into the future!

It has all the workings of a fantastic organization moving into the future. The challenges we face are surrounding the new norms of COVID. For us, we need to figure out how to take our programs and what we do into a digital format that can support the community until they feel safe enough to come in the doors.

What has prepared you personally the most for this situation?

I’ve had many opportunities to explore ideas throughout my career, and I think that has prepared me the most.

When I was at the Franklin Institute, there were some programs I wanted to implement, and I was given the green light to do that on my own.

When I was at Penn, I had many opportunities to develop video and audio content and K-12 content.

Those around and above me would listen to my ideas and provide me an opportunity to explore. Some worked out, and others did not, but those experiences helped me understand the value of being creative and testing things.

I never let fear or budgets stop me from trying something new. A lot goes into developing a new program – testing, analytics, planning, implementing, and assessing results.

And you’re working in West Chester!

I love working with the community. I fell in love with West Chester twenty years ago, and now I have a real opportunity to give back. That’s something I want to make sure we do.

What do you do in your free time?

Besides chasing around my kids, I’ve gotten into some amateur woodworking. I’ve been making furniture and candleholders recently. I’ve found some reclaimed wood to cut down and make candles out of recycles beer bottles and horse posts.

There’s always a stack of books in my office or near my bed that I’m working through. The last book I read was Meditations by Marcus Aurelius.

Finally, Conor, what is the best piece of advice you ever received?

It’s not necessarily a piece of advice that anyone has ever said to me, but I read it – “I will either find a way, or I will make one.” This was a quote attributed to Hannibal Barca, a Carthaginian general who led Carthage’s main forces against the Roman during the Second Punic War. He is widely considered one of the greatest military commanders in world history.

The story is that he and his men were at the foot of the Alps, and everyone was telling him that it was impossible to cross. They were convinced the mission was suicidal. Hannibal said those famous lines, crossed the Alps, was met by Roman forces on the other side and decimated them all.

From this quote, I always think anything is possible, and if someone tells you that you cannot do something, there is a way.