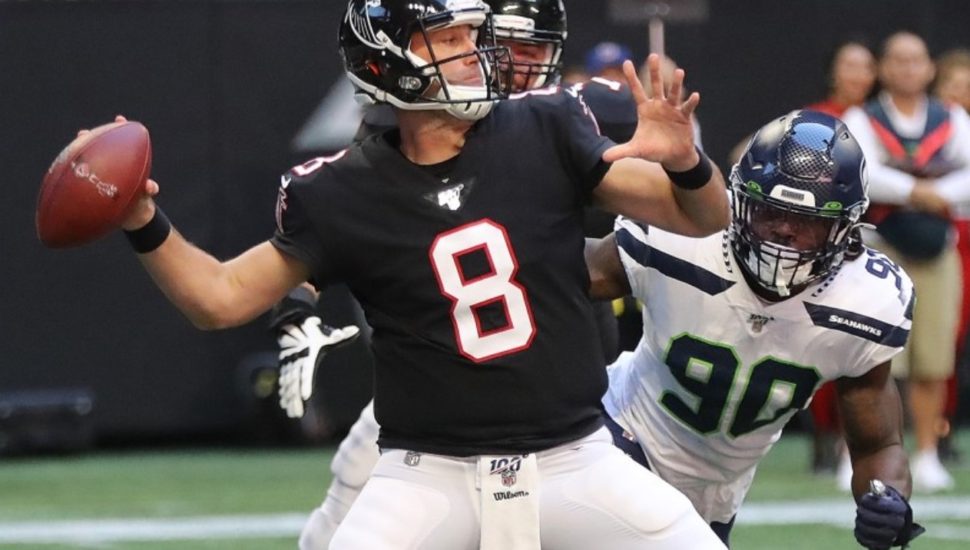 Image of Matt Schaub via the Atlanta Journal-Constitution.

NFL veteran quarterback Matt Schaub, a graduate of West Chester East High School, threw for 460 yards for the Atlanta Falcons in a 27-20 loss on Sunday to the visiting Seattle Seahawks.

The 38-year-old Schaub, who played collegiately at the University of Virginia, is in his second stint with the Falcons. He was drafted by Atlanta in 2004, and since then, he’s also played for the Houston Texans, Oakland Raiders, and Baltimore Ravens.

Schaub started in place of Matt Ryan, who also grew up in Chester County and whose streak of 154 consecutive stars in the regular season ended due to a sprained right ankle. Schaub completed 39-of-52 passes with one touchdown and one interception.

“I honestly didn’t expect a downgrade,” Griffin told The Associated Press. “The guy has been in the league for 15-plus years. He’s going to make the same kind of plays that Matt (Ryan) can make.”

Schaub led the league in passing yards in 2009 and has been elected to a pair of Pro Bowls.

“It was great to get back out there and be in the huddle with those guys,” Schaub told the Atlanta Journal-Constitution. “Under the circumstances, it’s never good when you’re going in during that situation with Matt (Ryan), but it was good to get an opportunity to get out there and sling it around a little bit.”