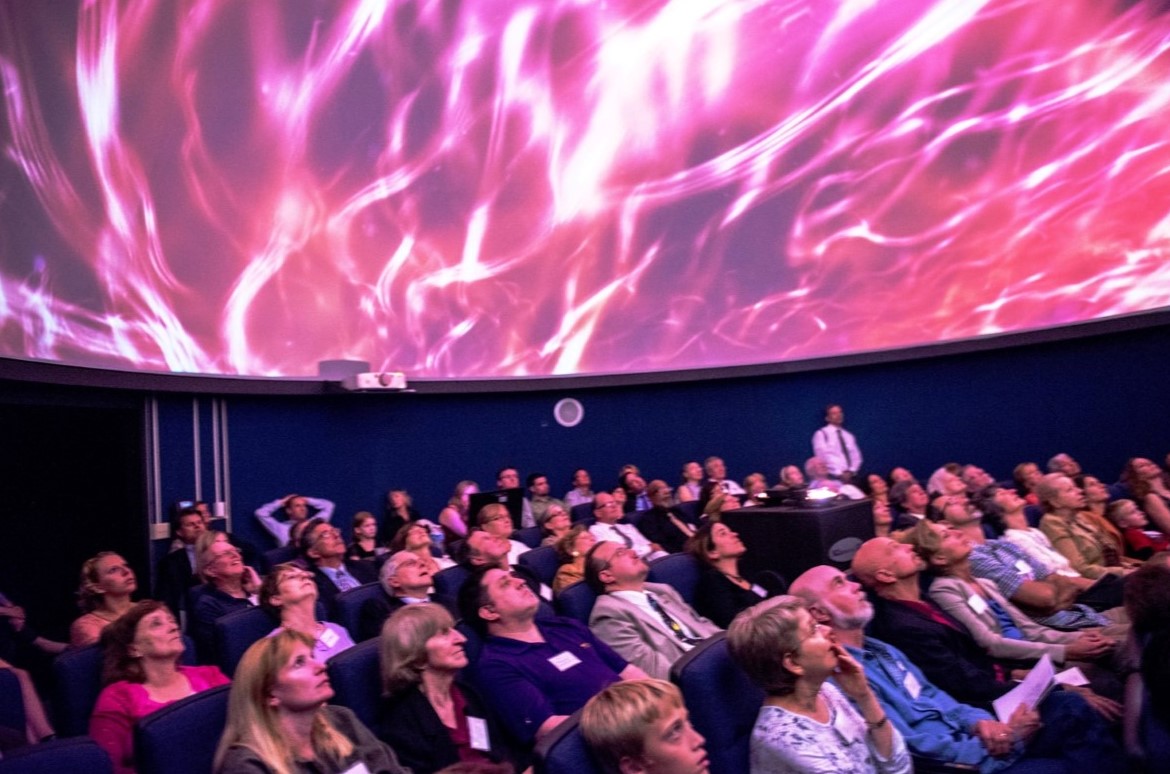 Let your children explore an imaginary lunar surface after they make space helmets (or bring them already dressed as astronauts) at West Chester University’s free 50th anniversary celebration of the Apollo 11 moon landing.

On Saturday, July 13, WCU will host a family-friendly recognition of the milestone anniversary with events that begin at 5 PM.

Planetarium Director Karen Schwarz, associate professor of Earth & Space Sciences, has devised some creative ways to engage children’s imagination as the nation celebrates the day – July 20, 1969 – when Neil Armstrong first stepped onto the moon. Beginning at 6 PM, there will be simultaneous activities for all ages next to the planetarium and on the Academic Quad (weather permitting).

First comes a 5 PM visit and talk with an engineer who worked in the space program. NASA Solar System Ambassador John Conrad has the first-hand story of what it took to land on the moon. From his perspective as an active space program participant, he’ll highlight the Apollo 11 mission and share personal insights and stories, ending with a brief look ahead to what’s next. Meet Conrad in Main Hall 168 (auditorium) at 5 PM.

Conrad followed his childhood interest in space and spaceflight – just before the dawn of the Space Age – earning his astronautical engineering degrees from the U.S. Air Force Academy and Purdue University and going straight into leadership of space programs for the Air Force, NASA, and the aerospace industry. Upon retirement, he was selected by NASA/JPL as a NASA Solar System Ambassador, a prestigious role in which he delivers both historical and forward-looking perspectives about NASA’s programs and achievements.

When Conrad wraps up his Q&A with the audience, guests can head to the Mather Planetarium, where free timed tickets will be given out for the full-dome movie Apollo 11: Man’s First Steps on the Moon. Showings will run every half hour starting at 6 PM. The planetarium is in the Schmucker Science Center Link on South Church Street.

Activities for youth – which include creating a pocket-sized solar system, making stomp rockets (paper rockets that launch with air by stomping on a two-liter plastic bottle), and improvising an astronaut’s space helmet from a paper bag – begin at 6 PM. Children who want to pretend to be astronauts can play in an environment Schwarz has created for them to imagine themselves walking on the uneven lunar surface.

Also, members of the Chester County Astronomical Society will have their telescopes out on the Academic Quad for viewing the moon, Jupiter, Saturn, and other astronomical objects (weather dependent). The moon will rise at 5:49 PM on July 13 and 90 percent of it will be visible since the full moon will be on July 16.

Activities will wind down by 10 PM.