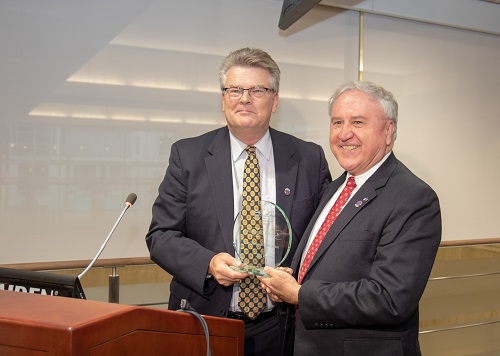 State Sen. John Rafferty Jr. was recently honored with the State Distinguished Service Award by the American Public Transportation Association at a ceremony held by SEPTA, which nominated the Chairman of the Senate Transportation Committee for improving public transportation in Pennsylvania.

Following decades of underinvestment throughout the Commonwealth’s transportation system, Rafferty gained bipartisan support for one of the most robust transportation investment solutions in the country: Act 89 of 2013.

Act 89 provides a critical and sustainable solution by increasing investments in public transportation, which are allowing our transit agencies to make vital, long-needed improvements, such as replacing infrastructure, vehicles, and equipment.

“I humbly accept this award, on behalf of my fellow lawmakers who courageously voted for Act 89,” said Rafferty. “This landmark legislation is providing new, recurring investments for our public transportation system that is enhancing safety, mobility, and economic prosperity for the Keystone State.

“Securing sustainable funding for transit capital and operational priorities is a key civic duty for a modern, interconnected society. This honorable recognition reaffirms Act 89 is delivering on its promises for the Commonwealth.”

“It has been almost five years since Act 89 was signed into law, but its impact is being felt across the Greater Philadelphia region and throughout the Commonwealth,” said SEPTA Board Chairman Pasquale T. Deon Sr. “Sen. Rafferty was the driving force behind Act 89, and he worked across the aisle to get bipartisan support so that we could begin making these critical investments.

“Thanks to his efforts, we are now seeing improvements to transportation infrastructure statewide, reversing decades of underinvestment that put these assets at risk. Sen. Rafferty’s efforts have helped ensure the safe, efficient movement of people, goods, and services throughout the state now and for future generations.”