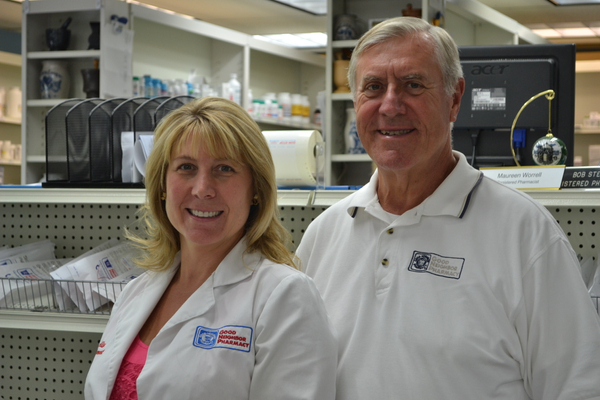 For 30 years, Quik-Stop Pharmacy in Thorndale has survived as an independent business by providing customized care and treating generations of customers like family.

“We’re the Cheers of our industry,” said Alissa Griffith, the pharmacist/co-owner. “That’s what makes us special. You come in the door, and we are probably going to know your name and know your family. The parents are customers, and now their kids come in and they have kids, and then they come. There are families and extended families that have been with us for 30 years.”

Griffith’s father, Robert Steele, moved to Thorndale in 1971 and was the manager of what was then a Thrift Drug Store, until he opened an independent pharmacy in Pottstown in 1977.

“I started working there when I was eight years old,” said Griffith. “I would go in with him on the weekend and clean the shelves, and as I grew up, I started ringing the register, and eventually, he showed me the pharmacy area, and I worked there with him all through high school.”

When Griffith graduated from high school in 1988, Robert opened Quik-Stop in the Barley Station Shopping Center in Coatesville. With no customers at first, Robert and his wife Illaria began to grow the business, and Alissa continued to help out while she attended and then graduated from pharmacy school.

Then, in 1997, the family had the opportunity to purchase the building that serves as the business’s current location in Thorndale, on Lincoln Highway. Soon after, Quik-Stop pioneered what has since become the trend for pharmacies all over the country – adding a drive-thru window.

“At that time, we were the first drive-thru pharmacy in Chester County,” said Griffith. “Before that, my father thought what a great idea it would be to have a drive-thru window because people could come to the pharmacy who are sick, infirmed, or have children and can’t get out of the car.”

Before the drive-thru window, the Quik-Stop staff would run things back and forth to the parking lot for people who had difficulty walking into the pharmacy, an effort that says much about how the pharmacy has served its customers for three decades.

“My father and mother had so much caring and compassion for the people who came to us,” said Griffith. “They respected us and became our friends and an extension of our family.”

Working in that caring environment had a lasting effect on Griffith, as she chose pharmacy as a career.

“I learned 10 times more from my father than I ever learned in pharmacy school,” she said. “It wasn’t that I loved chemistry, because I did not, but knowing the end result is being with patients and caring for customers — that’s what made me decide to go into pharmacy.”

Though Robert Steele has been retired for the past 10 years, he still makes an appearance several times a week, while Illaria Steele helps with cleaning and remains the unofficial Manager of Quality Control at the store.

Quik-Stop has three other pharmacists, as well as other staff members who’ve been working there for an average of 16 years. The store’s loyal customers come from all over the county, including Downingtown, Coatesville, Glenmoore, and even West Chester.

According to Griffith, there were once more than 100 independent pharmacies in Chester County. When she graduated from college there were maybe 25 or 30. Now, there are approximately five.

But the ones that are still around are thriving.

“We really don’t have to compete, because what we do, we do well,” she said. “And when I come to work, I feel like I get to see my friends all day long, and I don’t just mean my co-workers, but everyone who comes in. When you go to a chain, you’re just a part of someone’s eight hours that they are just trying to get through.”

As an independent pharmacy, Quik-Stop offers the same services as the retail giants, including a mobile app for ordering prescriptions, home delivery, and flu shots and immunizations. Griffith also takes pride in the pharmacy’s large inventory of items that people are often unable to find in other stores, or their willingness to order any item a customer needs that is not on the shelves (and it’s usually delivered the next day).

“What sets us apart is that personal service and that we truly do care,” she said. “If someone comes in and is having a bad day, we go out and give them a hug. We’re happy when good things happen to our customers and sad when sad things happen. You really get to see and experience all these things in people’s lives. That’s why I love working here.”