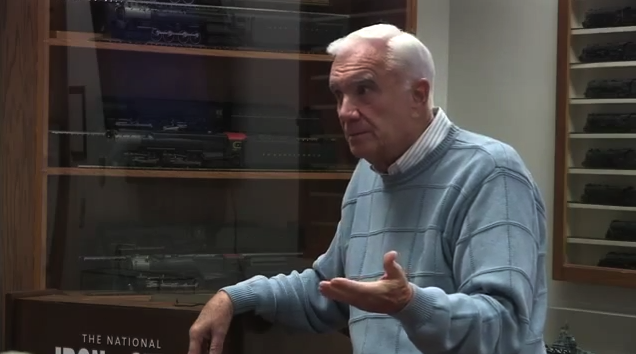 VISTA Today spoke with Ross Kershey last week about growing up the son of a coal miner, finding his way to Temple and earning a spot on the school’s varsity basketball team, the happenstance conversation with a placement councilor that brought him to Coatesville, finding his calling teaching and coaching Coatesville students, how his admonition to stay calm in the face of adversity saved one of his players life in Vietnam and why he remained at Coatesville for his entire teaching career despite efforts by rival Downingtown High School in 1960 to lure him away.

Where did you grow up Ross?

I was born 1933 in West Virginia, the second of two children. My parents were in West Virginia because that was the only place my father, who was a coal miner, could get work during the depression. We lived in West Virginia for a year and a half until my father was able to get work again in Southwestern Pennsylvania. My dad continued to work in the coal mine, and my mother was a housewife.

Where were you raised?

I was raised outside of Connellsville, in Pennsylvania’s bituminous coal region. We lived in a company house and shopped at a company store.

What do you remember about growing up in Connellsville?

What jobs did you have while you were in high school?

I didn’t have any jobs in high school. After high school, I was the census taker for the school district and did manual labor for West Penn Power Company, the local power company. I did work at the Anchor Hocking Company every summer while I was in college. I worked on their paint crew with a bunch of other college guys painting the factory and other odd jobs around the plant.

What kind of music were you listening to back then Ross?

There wasn’t Rock & Roll yet, so we listened to artists like Nat King Cole, Tony Bennett, Jonie James, Rosemary Clooney: they were the standards in those days.

What sports did you play in high school?

I played basketball in high school and continued to play when I got to Temple. Basketball wasn’t emphasized at my high school; rather it was a sport the boys played after football and until baseball started.

When I got to Temple and started playing against bigger, better, older players, I got to be a reasonably good player. I made Temple’s varsity squad my Senior year and played for Coach Litwack, who ended up in the Basketball Hall of Fame.

Why did you decide to go to Temple?

The high school I went to didn’t do a good job preparing us for college. They saw their role as getting kids in and out of high school in four years before going to work in the coal mines or steel mills. In my graduating class of 135 students, only two of us went to college. I got a Senatorial Scholarship to attend Temple, so I went there. Without the Scholarship, I wouldn’t have gone to college.

Did Temple turn out to be a good school for you?

It was. I majored in Communications, which in 1951 was radio, television and journalism. Once I graduated, I made the decision to become a teacher. None of my communications education was wasted. After all, what is teaching other than communication.

After Temple, I attended the Indiana University of Pennsylvania for a year to get my teaching credentials and student taught at Greensburg High School, an hour east of Pittsburgh.

How did you end up in Coatesville?

This is the amazing part of my story. After I had finished my student teaching, I went back to the placement director at Indiana University to make sure all my teaching credentials were in order. He confirmed my credentials were fine and asked me what I wanted to do.

A phone call from Coatesville was waiting for me when I got home. I came to Coatesville for an interview, and they hired me.

Did you look jobs in any other school districts?

Ridgeway High School in the Northwest corner of the state wanted me to come there and teach and be the head basketball coach. Coatesville had me slotted to become the assistant basketball coach. I liked the idea of being head coach. I was 22 years old and thought I knew everything there was to know about basketball.

The principal at Ridgeway, a guy named Stu Edwards, had just left Coatesville to take the Ridgeway job. So when I told him I was looking at a job in the Coatesville School District, he told me Coatesville was a tough place and that I wouldn’t like it there.

What did you think of Coatesville when you arrived?

My game plan was to teach at Coatesville for a couple of years and move on to a bigger and better place. Within a couple of weeks, however, I discovered not only did I like Coatesville, the kids in Coatesville needed me. I had found my calling.

I won a lot of victories on the court at Coatesville. But those victories and the scores fade very quickly, but the lives of young people don’t. The best victories I ever had were the young men who used basketball and track to make better lives for themselves.

You were making an impression on the kids?

I was. I saw that especially when my students started to come home from Vietnam. One kid told me the two words I had drilled into their heads in basketball practice and games, “Don’t Panic,” had saved his life. He told me a harrowing story of being ambushed while out on patrol with three other guys in the jungle in Vietnam. The three other guys panicked, ran and were cut down. My player waited in the foxhole until reinforcements arrived and survived the ordeal.

What did you teach at Coatesville?

I taught history for 42 years at Coatesville. One thing I learned is you can’t teach history to high school students without first selling history. I let the kids in my classes know they needed to know what happened in the past to prepare themselves for the future.

I had a deal with the administration that they would allow me to teach the best kids if I also taught the lowest sections. I thought I did my best work with the kids in the lower sections. The smartest kids didn’t need as much help. They were going to make it no matter what I did. The kids in these lower sections needed me, and I needed them. They knew I really cared about them. Coach Ross Kershey on his way to compiling 462 wins against 129 losses over 28 seasons as Coatesville’s basketball coach.

So you get to Coatesville, and you become a basketball coach?

I was assistant basketball coach under Walt Funk. When Mr. Funk became the principal of the high school, I stepped up to head coach. I coached from 1962 until 1982, then again for two more years in 1984 through 1986.

I stepped into the head coaching role agin in 1993 at age 60 and coached for two more years. During those two years, I coached Rip Hamilton, who went on to a great NBA career and Darrell Lewis, who at 39 years old, is still playing professional basketball in Europe.

You became Coatesville’s track coach too. How did that happen?

Walt Funk, who was the head basketball and track coach, needed an assistant track coach. I didn’t know anything about track. I read a lot of books and spoke to Jumbo Elliot, Villanova’s track coach and watched his practices. I became a track nut and had much more success in track than I ever did in basketball.

Why more success in Track?

Yes, Coatesville kids were track nuts! In my 14 years as head track coach we lost one track meet. We were 103-1! McKaskey High School in Lancaster was the only team that beat us. We beat them on the track, but they killed us in the field events.

What are you doing now?

I retired from teaching in 1998 and for six years my wife and I traveled all over the world. Around 2004 traveling got old. I heard about adult education classes Widener University was offering at their Exton Campus and enrolled. They quickly found out about my education background and made me a teacher. I started teaching at Widener in 2005, and I’ve been teaching there ever since.

Right now I’m teaching a class on World War II and have 100 students in my class; the smallest class I’ve had in the last five years. When I taught a course on Lewis & Clark, I had 180 students!

I’m doing adult learning programs on controversial presidential elections at nine senior residential communities across Chester & Delaware Counties including Spring Run above Hibernia. In those classes, I remind my students of something the author William Faulkner once said, “There is no present, no future, only the past repeating itself.”

What’s the best piece of advice you ever received Ross?

My dad, who was not an educated man but very intelligent, told me, “Boy, if you ever go into the coal mine I’ll break both your legs!” He was a man of few words, but those few words were good words.