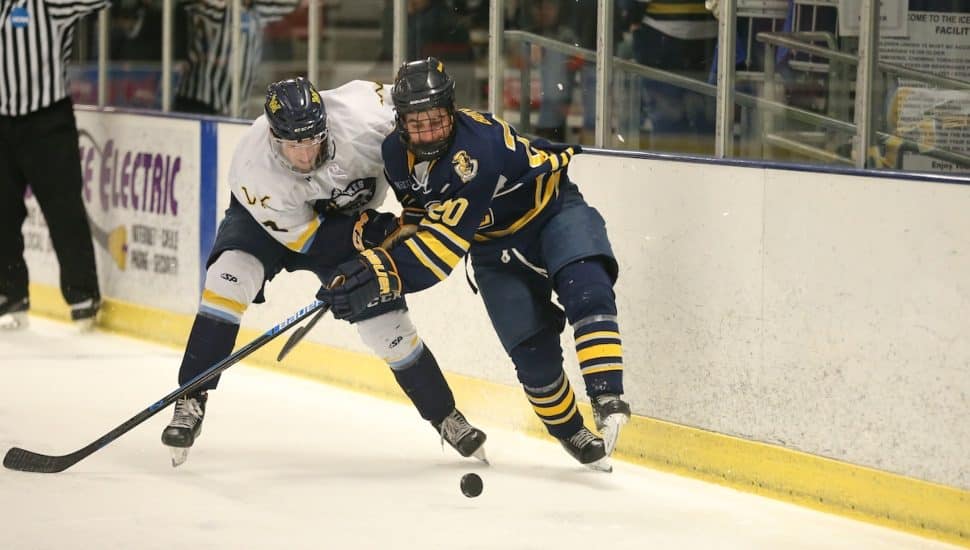 After an 11-month absence of sports on campus, ice hockey is about to return to Neumann University.

After the cancellation of all spring and fall sports last year and basketball this winter, athletic competition is set to reappear at Neumann in the form of women’s and men’s ice hockey. The United Collegiate Hockey Conference (UCHC) will begin an abbreviated season schedule on Friday, Feb. 19.

Both the women’s and men’s ice hockey teams are scheduled to play on opening day. The women open against Lebanon Valley College at Hershey, while the men lace up their skates against Chatham University at Ice Works Skating Complex in Aston.

The men face a 10-game schedule (five home and five away) with the season finale on March 27 at home against Utica College. The women take on a 12-game season (six home, six away), also finishing on March 27. They conclude the UCHC slate against Stevenson University in Owings Mills, Md.

Both Neumann teams play their home games at Ice Works. Of course, the status of each contest is contingent upon campus, local, state, and federal COVID-19 guidelines at the time.

Players on both squads will be tested three times each week for coronavirus. Postseason play will conclude on April 4 with conference championship matches for women and men.

“I cannot explain how good it feels to be back on the ice with our team,” said women’s coach Gina McLaughlin. “For the returners, it’s been almost a year since they have played a game. In a time where so much is unknown and different, being on the ice just feels right. It’s where we are supposed to be this time of year, and that brings some normalcy back into all our lives.”

“We’re all incredibly grateful for the opportunity to compete again,” said men’s coach Kyle Mountain. “Our student-athletes have worked extremely hard and remained patient through a frustrating set of circumstances. We will continue to be presented with challenges as a group but having the support of the UCHC and Neumann makes us all feel very fortunate. We can’t wait to get started.”

Ice Works is operating at 50 percent capacity (with social distancing) and requires that masks be worn.

Most of Neumann’s teams play in the Atlantic East Conference, which officially canceled conference competition in fall and winter sports on Jan. 22.