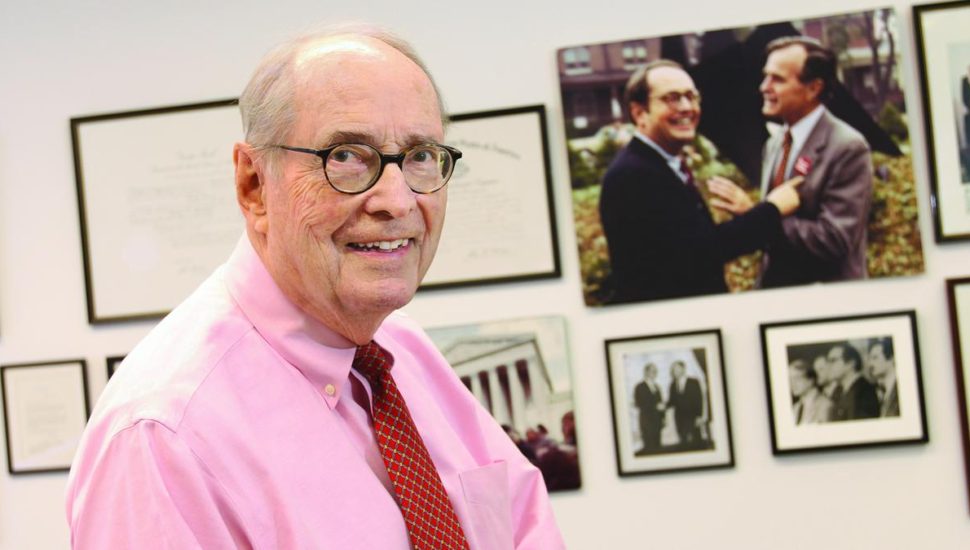 Image and caption via Pittsburgh Business Times.
Richard Thornburgh, lawyer, governor, attorney general, and advocate for people with disabilities, passed away at age 88.

What We’re Reading is a short synopsis of interesting, noteworthy, and sometimes inspiring stories and news happening across the region, state, nation, and occasionally the world that may not be happening in Chester County, but nevertheless deserve to be shared.

The Man Knew How To Lead

Noting that he steered Pennsylvania through the Three Mile Island nuclear plant meltdown and led the Justice Department under Reagan and the first President Bush, the New York Times‘ obituary of two-term Republican governor of Pennsylvania Dick Thornburgh noted Thornburgh’s formula for success – “Clean house, restore order, and move on to higher office” – had to be reworked a bit when Three Mile Island melted down in 1979.

Trained in civil engineering and the law, Mr. Thornburgh was accustomed to dealing with the cold, hard facts of sciences and statutes. Facts were hard to come by in the maelstrom of chaos and fear after the meltdown of a nuclear reactor threatened to cover the mid-state region and the eastern seaboard with a blanket of radioactivity.

Taking charge of the crisis, Governor Thornburgh was a calm voice against panic and made decisions that proved to be correct.

“You have to reassure people,” he said. “You have to go before the cameras and microphones and tell them what you know and what you don’t. You have to stop the rumors, and, of course, you have to make decisions. There isn’t any Republican or Democratic way to deal with a nuclear crisis. Nobody has ever had to deal with this kind of accident before.”

Not to get political but State Senator Gene Yaw, a Republican whose district covers portions of Susquehanna, Bradford, Sullivan, Lycoming, and Union County in upstate Pennsylvania and who says he voted for and gave money to Donald Trump in 2016 and again in 2020, made the case in a press release last Thursday for following and respecting the law as it pertains to the baseless claims by President Trump and his supporters the 2020 presidential election was rigged.

PhillyVoice has a great you-can’t-beat-city-hall story about a Pennsylvania Superior Court ruling ordering Beverlie Seltzer, a Pipersville, Bucks County resident and a former longtime employee of a Doylestown Acme, to give back a winning, $4.15 million PA Match 6 ticket that she claimed last year from the store’s pile of discarded “mistake tickets.”

Seltzer obviously didn’t realize tickets are time-stamped and she was being watched!

Thanks, Dad, I Got This!

On top of being a phenomenal athlete, Jones, who still plays with Legos, is well-grounded. When his friends at school chide him that he only has what he has because of his father’s coaching, Kai’s quick retort is to acknowledge his dad, a former pro skier who opened the door for him, “but I also worked my butt off every single day. I get up before the sun rises to head to the mountain, and I train year-round. I’ve probably done 5,000 backflips.”

Chester CountySCORE Keeps Small Businesses A Step Ahead With Free Webinars in MarchMarch 8, 2021