Image of 10 Bryan Avenue in Malvern via DreamWorks. 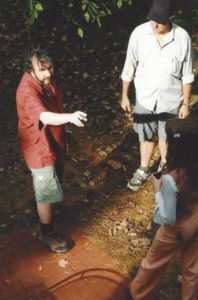 If you like the idea of owning a house that was used in a Hollywood film, the house that young Susie Salmon haunted in Peter Jackson’s supernatural thriller The Lovely Bones is up for sale.

The three-bedroom California split-style home, located at 10 Bryan Avenue in Malvern, was selected by Jackson because it sits on a peninsula lot in a beautiful, quiet neighborhood.

Betty Seeley, the home’s present owner, remembers sitting on the front porch with friends in the middle of June when two women pulled into the driveway, got out of their cars, came up to the porch, and said they were interested in using the house in a movie. After learning that it would be directed by Jackson, of Lord of the Rings fame, she gave them permission to check out the house.

The next day, a limousine bus pulled up and more than 20 people piled out onto the lawn.

“My husband Gus said that only three people could come into the house at a time,” she said.

The first ones in were the videographer, production manager, and art director. They were pleased with what they saw.

“After everyone left, my husband said, ‘No movies in this house!’” said Betty.

But Jackson’s people said they would send him anywhere he wanted to go on an all-expenses-paid vacation, if he would agree.

“Instead of Bali and Fiji or some other exotic place, he decided to go to his cabin in the woods in western Maryland,” Betty said. “They also sent him with a chef and a housekeeper to make him comfortable, while I stayed at home with the crew while they filmed.”

In a scene from the film, Mark Wahlberg eats dinner with the kids at 10 Bryan Avenue in Malvern. Image via DreamWorks.

Originally, Ryan Gosling was asked to play the role of Susie Salmon’s father. But on the first day of filming, Jackson decided that he didn’t look the part because he had bulked up and gotten a crew cut. Jackson instead gave the role to Mark Wahlberg.

“Word got out, and everybody now wanted to come over and see him,” Betty said.

After looking over the home, the film crew said it wanted the oven so they could create a realistic replica in the studio.

“So, they ripped out the old one, took it away, and let me choose whatever brand new one I wanted,” Betty said.

The entire neighborhood was then invited to a get-together at the General Warren Inne to be informed of filming procedures. During filming, the crew took the siding off more than a handful of homes in the neighborhood. The homeowners were then offered whatever siding they wanted after filming was over, and it ended up improving the appearance of the whole block.

The Lovely Bones is based on the book of the same name by Alice Sebold, who grew up in Malvern and graduated from Great Valley High School.

The house at 10 Bryan Avenue will hit the market on Feb. 23.