Thanks to Social Media, Locals Flood Pizza Shop to Help Out Owner 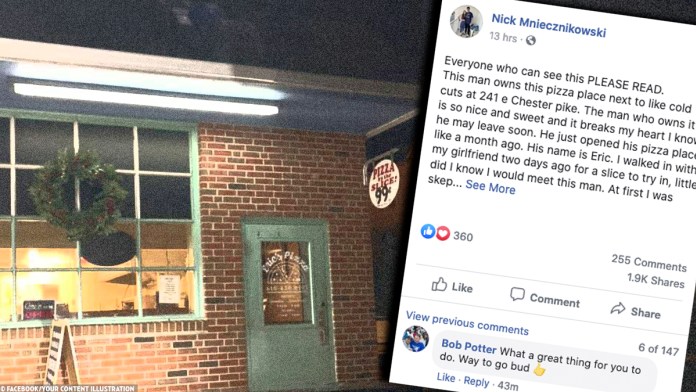 Nick Mniecznikowski wrote about Eric’s Pizza at 241 East Chester Pike on his Facebook page after striking up a conversation with the owner.

This was the owner’s second shop. He had to close one in Clifton Heights because he couldn’t compete with the corporate-owned pizza chains.

“The man who owns it is so nice and sweet and it breaks my heart I know he may leave soon. He just opened his pizza place like a month ago,” wrote Nick Mniecznikowski, who worked at Double Decker Pizza in Media. “It just broke my heart to think that his dream of owning a pizza place that may not happen.”

The post garnered the attention of thousands, including local businessman Mike McVeigh, who the next day ordered six pizzas for “13 hungry salesmen” at David Dodge Chrysler Jeep in Glen Mills.

He reported a two-hour wait because of the high volume of business.

“Support local business but more than that support one another! Everyone that got involved, well done!” he wrote.

Read more about Eric’s Pizza and the social media effort to help the shop from Your Content here.