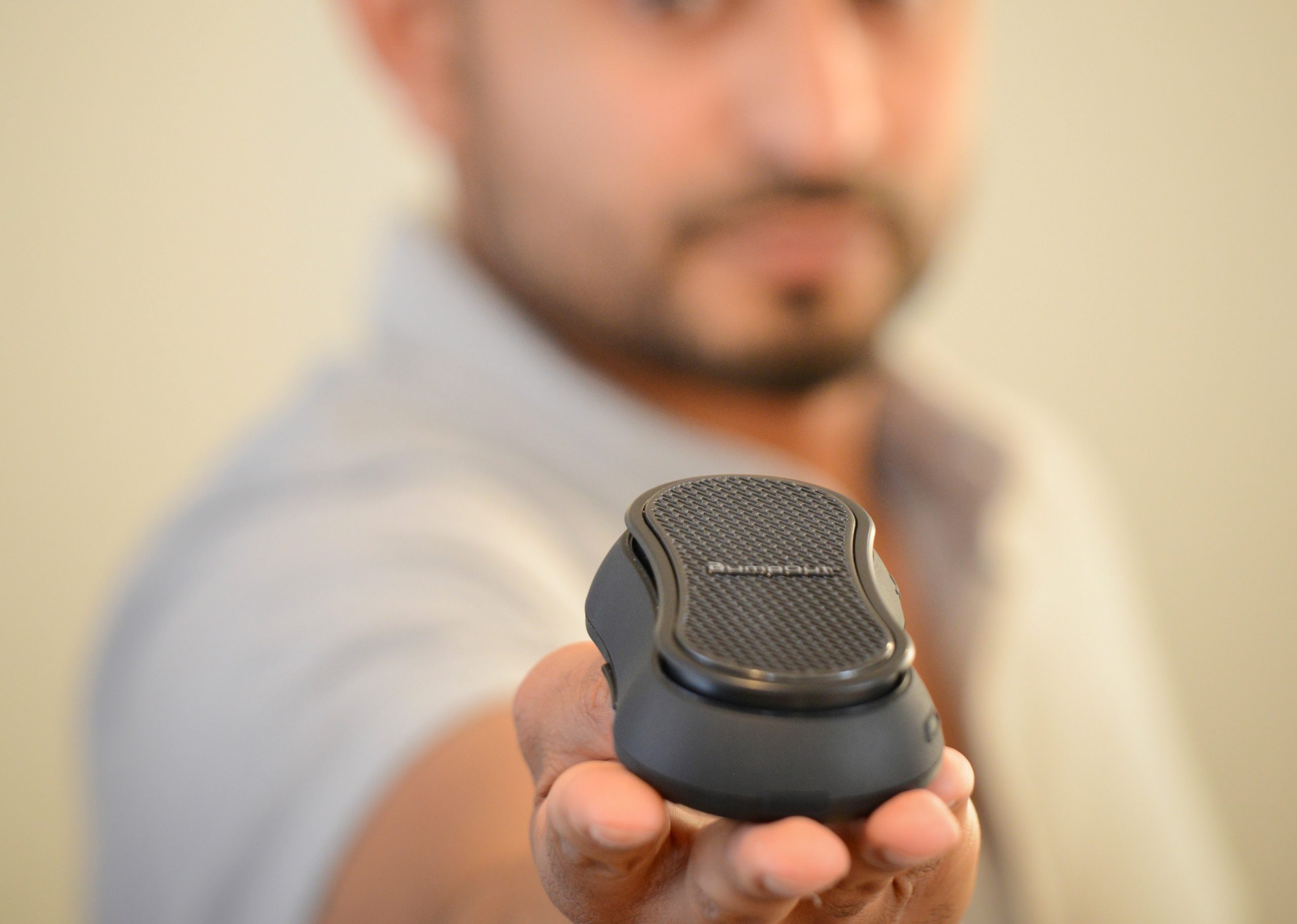 As one of Shark Tank’s resident savants, Mark Cuban routinely turns thumbs down on the intense, almost desperate sales pitches that entrepreneurs present to him and his fellow sharks. And when he does offer to invest in an enterprise, it’s not often that he’s turned down.

But that’s kind of what happened when the owner of the NBA’s Dallas Mavericks expressed interest after viewing a 3-D video depicting the BumpOut portable speaker, a startup by Wilmington Adjunct Professor Mathews Chacko and partners Zac Pierce and Mike Israel.

Cuban made an offer, the partners carefully considered it, then basically said, “Thanks, but not right now.” Clarifies Chacko: “There was an initial deal on the table, but we decided to postpone it and let him watch our journey before we re-engaged.”

It was a surprisingly restrained reaction to such a high-powered potential investor, but it proved to be prudent. Cuban’s original, rebuffed interest came in 2016; two years later, he was brought on as a major investor.

That was a watershed moment in the growth of an entrepreneurial venture that defied the odds and sometimes supplies classroom fodder for Chacko, who has been an adjunct in the College of Arts and Sciences since 2011.

A palm-sized speaker that connects through Bluetooth with any make or model of a smartphone, BumpOut had its genesis on the streets of Philadelphia. Pierce was working in Center City in 2012 when he saw a group of teenagers trying to hear music playing on a phone. As Pierce tells it, “They were all crowded around, and you couldn’t hear a thing, and I said, ‘Why doesn’t someone make a speaker you can attach to your phone?’”

Pierce was well into a successful career with a large real estate brokerage firm, so he let the intriguing idea germinate for some time. But finally, the potential compelled him to leave real estate in early 2015, do a ton of market research, and develop a 50-page business plan for the speaker.

Pierce, 41, and Chacko, 33, had become friends while mentoring youth at their alma mater, Upper Darby High School in Drexel Hill, where Chacko had been a four-year starter on the Royals’ perennially strong wrestling team. As the relationship started to grow, Pierce revealed his plans for what would become the BumpOut speaker. In 2016, Chacko said, “I decided to drop everything I was doing (except his adjunct position) and go full force into bringing BumpOut to life.”

The native of India (his parents came to the U.S. when he was 2) wasn’t a total newbie to entrepreneurship. Although dedicated to his career in higher education, Chacko said, “I always wanted to build something for myself, and I would often look to Zac for business advice in my own ventures.”

With a previous partner, Chacko had made a foray into the restaurant and food industry, in the form of a food truck and a takeout service. That experience, he said, “taught me the foundation of starting and maintaining a business, but I decided the food industry wasn’t the way to go.”

But the BumpOut concept had real possibilities, and he and his partners, which by then included Brian Zamrowski, of Malvern, set to work, as Chacko terms it, “connecting the dots.” And there were many dots to connect.

First of all, he says, “None of us were audio guys. But we were able to find high-level experts to help us streamline our research and development and manufacturing processes.”

Another problem was one of geography. A hardware startup in the tri-state area is challenging. “Typically,” said Chacko, “you see funding for software and medical companies.”

They were told that they had to go to New York or Los Angeles for an enterprise like theirs. But the homeboys wanted to keep their business in the area, and they are now headquartered in West Chester.

“Our goal is to stay right here and reinvest back into the community,” said Pierce.

Chacko says the speaker was in R&D for two years. But once prototypes were developed, the BumpOut team wasted no time in securing some big-time investors.

Perhaps their major investment coup was attracting the behemoth Benjamin Franklin Technology Partners of Pennsylvania. Since its founding by Gov. Dick Thornburgh and the Pennsylvania Legislature in 1982, Ben Franklin has been the leading seed-stage capital provider for the region’s technology sectors, investing in more than 4,500 companies and boosting the state economy by more than $25 billion while helping to generate 148,000 jobs through client firms and their spin-off companies.

The partners also gained a large measure of confidence by reaching $90,000 on Indiegogo, an international crowdfunding site, in just four days, pre-selling the speaker at a discounted price to backers.

The BumpOut trio went to China for manufacturing, but they kept distribution local, going with American Telecast Products and its fulfillment center in Exton.

The slim Bluetooth speaker retails for $99, and features a Motorized Expansion System. With the click of a button, the system “bumps out” the center of the essentially flat speaker, delivering high quality sound and bass.

The product package includes BumpOut Coins – small disks that have a re-positionable adhesive mounting system, allowing the speaker to be placed in most areas around the home, office, locker room, or wherever customers want their music. The result: BumpOut’s size and portability give it a decided edge on competition.

“We like to compare it to box TVs going to flat screens,” Chacko said. “There just hasn’t been any innovation in audio.”

Similar to their measured reaction to Cuban’s first offer, the partners, despite high hopes for the product, are not counting on immediate riches. “We don’t expect our first profits until year three,” said Chacko. In the meantime, he said, “We’re doing R&D into other products, and planning to take them as far as we can, then get more strategic production partners.”

“Eventually,” he said, “we’d like to become angel investors (individuals who invest at the early stages of a startup).”

Just as important to Chacko as the product itself is the related youth initiative he and Pierce started – BumpOut United. The nonprofit grew out of their volunteer mentoring sessions at Upper Darby High School. They found that students had plenty of interest and many questions about the business world, and the two partners and friends provided them with real-life experiences.

Encouraged by the students’ response, Chacko and Pierce have staged live events at the school that featured entrepreneurs from various industries as well as people from professional sports and the music industry. Nearly 900 kids attended one event.

The partners have developed a curriculum that focuses on building soft skills, such as communication, critical thinking and digital literacy, which, Chacko said, “are transferable to any field of their choice.”

“We pitched the Upper Darby school administration and school district and secured a partnership with them to pilot our program,” he said. “We use this platform to inspire the students to pursue their passions, but in a programmatic way. We want to prepare youth of today to be able to have the skills necessary to control their own futures with our curriculum. We truly believe in our cause and feel that we’re on the forefront of an educational shift.”

During the past school year, Chacko and Pierce went to Upper Darby High for an hour every Wednesday, speaking to and inspiring groups of kids. “We use our story,” Chacko said, “explaining that even though we were not audio guys, we figured out ways to make our product work.”

They are planning to launch a more detailed program this fall.

Chacko is quick to acknowledge his own mentors, especially Pierce. “My old business partner [in his restaurant endeavors] paved the way for me, and Zac elevated my skill set to levels I didn’t think I could achieve. [As a result] I have been in some of the biggest rooms with billionaires, celebrities, etc., and held my own,” he said. “That’s the power of mentorship and I am forever grateful.”

Meanwhile, he’s enjoying his career at WilmU, where he teaches Critical Thinking (PHI 101), Building Brain Power (PHI 310) and Empowerment Strategies (PHI 325). “I’ll continue to teach because I love it and it gives me an opportunity to make an impact in my students’ lives,” he said. “The students here have such a strong entrepreneur sprit and it shows in my classes.”

“One day,” he said, “I would like to help build an entrepreneurship program at Wilmington University.”

If that comes to pass, Chacko will no doubt explain to students in the program that BumpOut is not only a noun but also a verb.

“We use it as a verb,” he said, “to mean to step out of the pack, to blaze your own trail, and follow your passions and what you love into the business or field of your choice. That is true entrepreneurship.”