Almost Fully Leased, The Grove to Debut in Malvern in Fall or Early Winter 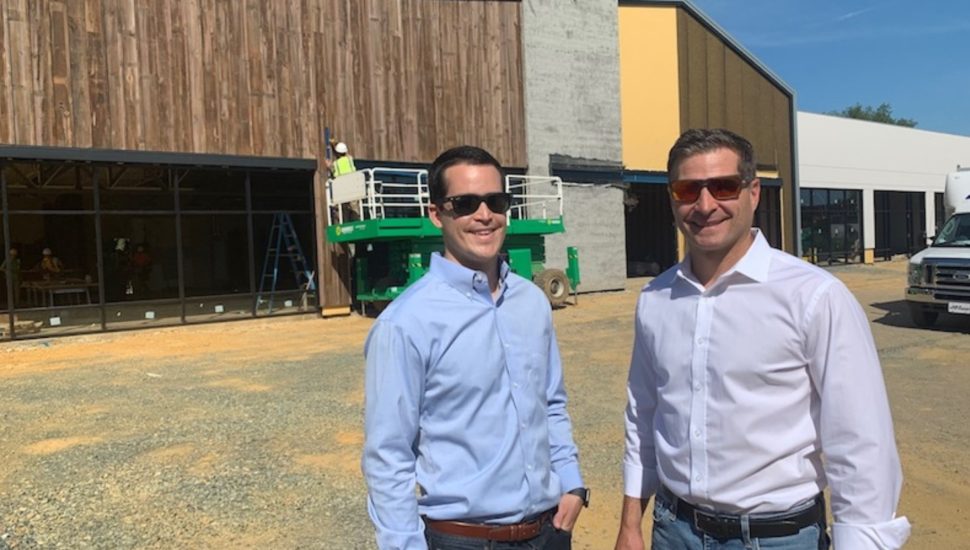 Image of Austin Wolfington, left, and Jason Dempsey of DP Partners at The Grove via SAVVY Main Line.

The Shops at Great Valley in Malvern will soon reincarnate as The Grove, a trendy lifestyle center focused primarily on fun, writes Caroline O’Halloran for the SAVVY Main Line.

The newcomer is almost fully leased already and is expected to make its debut in the fall or early winter. Among its cutting-edge, casual lineup are Splitting Edge Axe Throwing, Sly Fox Brewery, and BOMBA Tacos and Rum.

There’s also a yoga building and a 9,000-square-foot gathering space with lawn, benches, chairs, fountains, and a huge television. This man-made picnic grove is envisioned for kicking back and enjoying special events, such as Eagles games, concerts, movie nights, and even fitness classes.

“We want people to say, ‘Let’s go see what’s going on at the Grove,’” said the center’s developer, Jason Dempsey of DP Partners. “It’s the whole suburban-urban effect. We wanted to create a place to hang out.”

Dempsey purchased The Shops at Great Valley two years ago for $5 million. He has since invested an additional $22 million to transform the property.

Read more about The Grove at SAVVY Main Line here.

SportsWhat Does This Coatesville Teen Want to Be When He Grows Up? A Pirate or a Lion?July 15, 2021
Tags: BOMBA Tacos and Rum, DP Partners, Jason Dempsey, Malvern, SAVVY Main Line, Sly Fox Brewery, Splitting Edge Axe Throwing, The Grove, The Shops at Great Valley