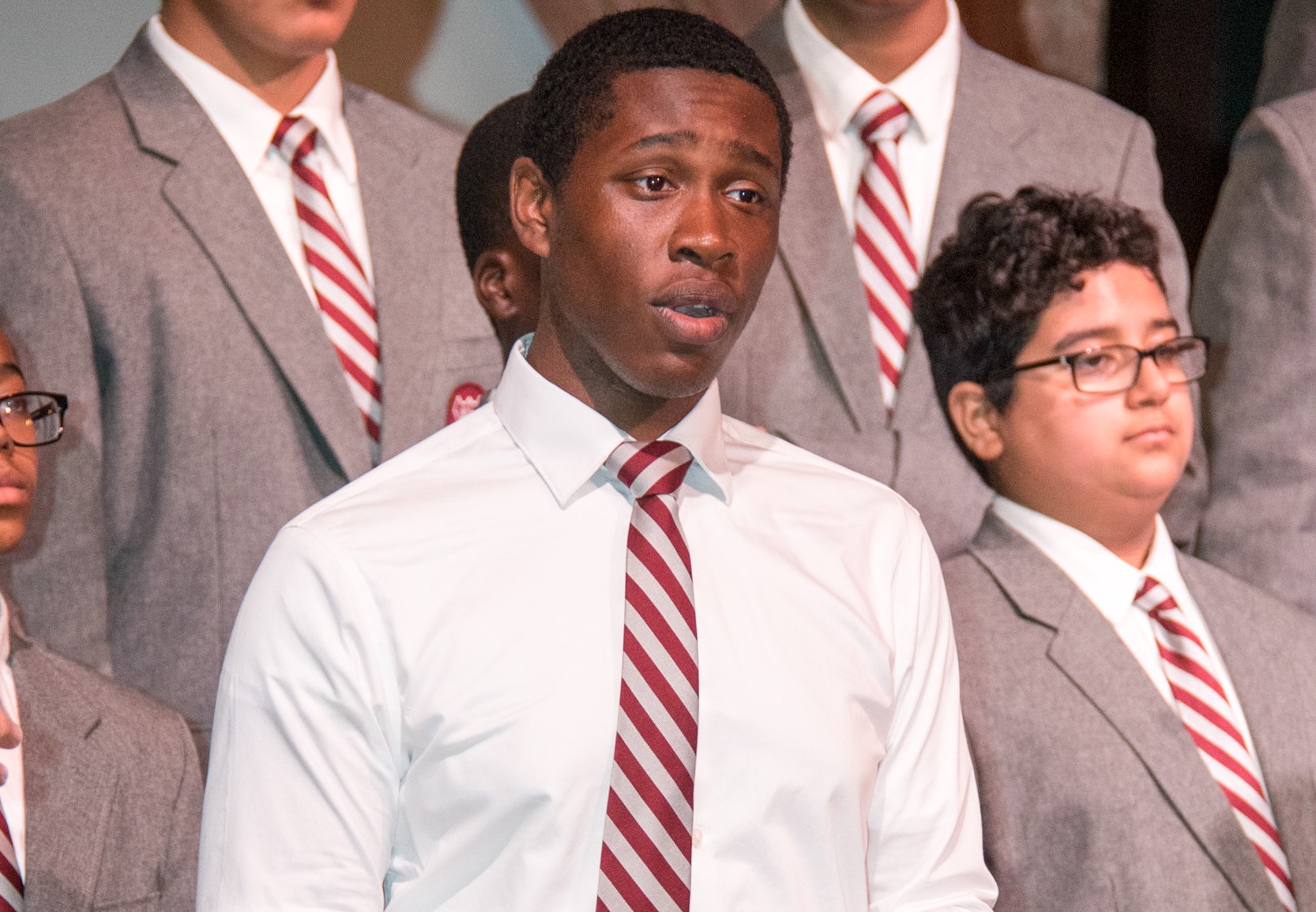 When Anthony Thompson ’19 came to Church Farm School as an eighth-grader – the school has since dissolved its Middle School – he had never sung before.

Fast-forward five years, and Thompson is a celebrated Tenor 2 vocalist who has sung at Carnegie Hall, district, regional, and state PMEA competitions, at the National Cathedral in D.C., Citizens Bank Park, the Devon Horse Show, and at three CFS Galas. This past weekend, he was one of two CFS students (and one of only five in the school’s history) to be invited to sing at the NAFME All-Eastern Ensembles in Pittsburgh, an honor bestowed on the top musically talented high school students in the Eastern U.S.

“A huge part of this has been (choir director) Mr. (Gary) Gress, who is able to teach a lot of young men without any choral background,” Thompson said. “But some of it was me wanting to try it, to be better and recognizing my potential.”

Some of his favorite pieces are those the choir performs each year at the Gala, the school’s largest annual event fundraiser, such as “Circle of Life” from The Lion King and an original Star Wars-themed piece, complete with a lightsaber battle.

“We have a woman who comes in to work with us each year, who helps us add movement to our bodies and facial expressions,” Thompson said. “We have some fun surprises in store for this year’s Gala.”

He said another of his favorite pieces to sing is Mozart’s “Solemn Vespers,” which the choir performed at Carnegie Hall when it was selected to participate with the Masterworks Festival Chorus, and then sang again at a regional chorus competition to which select CFS students were invited.

“I find myself singing that one in the hallway, and I’m always amazed that I remember it because it’s such a difficult piece,” Thompson said.

Perhaps the most well-known song at CFS, “The Lord Bless You and Keep You,” is sung by the choir each year at Commencement, and there is usually not a dry eye in the house among the graduating seniors, their families, the school’s faculty and staff, and even the choir themselves.

It is especially moving for Thompson, because the choir sang the piece at his late mother’s funeral last May. Nathania passed away suddenly on Mother’s Day while getting ready for church. She and her husband, Michael, of Newark, Del., were an integral part of the CFS family, sharing their experiences to prospective families at Open Houses, cheering on their son at bowling matches, and attending the CFS Gala each year so that they could support their son and his friends in the CFS Choir who bring their impeccable vocal talents to supporters of the school.

Despite the tragic loss of his mother, Thompson was quickly enveloped with concern and care from his “Griffin” family, who lifted him up and through an experience no teenager should have to face.

On April 27, at People’s Light in Malvern, Thompson, a senior on his way to Hamilton College, will sing at his last Church Farm School Gala. Each year, the Gala raises more than $200,000 for student scholarships.

This year, the Gala will also endeavor to raise enough extra funds to help send the choir to Israel in June 2020, a trip that Thompson believes will be transformational for his peers, and one he says he is hoping to join.

Join CFS in supporting amazing young men like Thompson and 175 others in grades 9-12 whose tuition is largely funded by philanthropy and the school’s strong endowment. In addition to a wonderful program of music of Jewish-American composers by the CFS Choir, the Gala will feature a cocktail reception and seated dinner, a live auction, and the chance to learn more about the school’s mission.