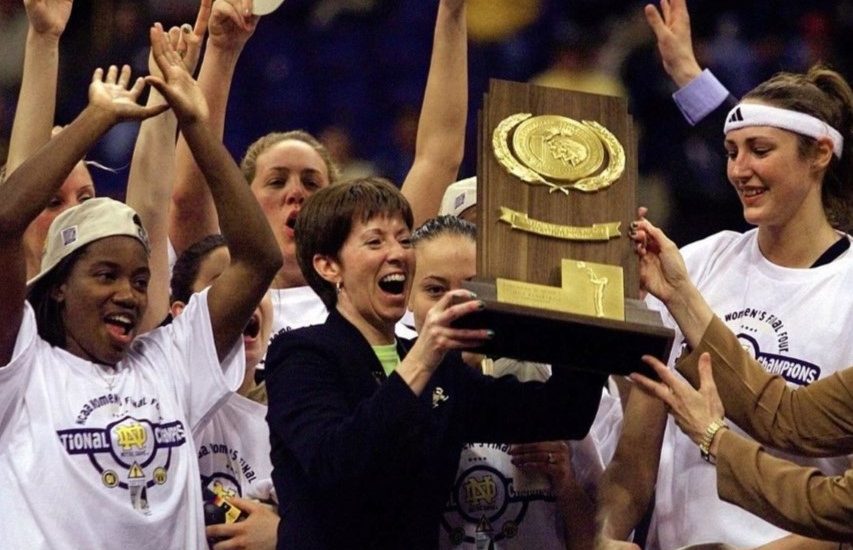 West Chester helped produce a legend in women’s college hoops, and last Friday, the sporting world acknowledged Muffet McGraw, shown here after leading Notre Dame to the 2001 national championship, as a Hall of Famer. Image via the Associated Press.

She was happy coaching high school, and she was thrilled to lead a college team.

But hundreds of Notre Dame women’s basketball players from 1987 to today are ecstatic that Muffet McGraw, who grew up in West Chester and graduated from Bishop Shanahan, didn’t stop there.

Last Friday, McGraw was inducted into the Naismith Basketball Hall of Fame for a career that has spanned 853 wins, 22 straight NCAA tournament appearances, the 2001 NCAA championship, and countless changed lives, according to a South Bend (Ind.) Tribune feature by Tom Noie.

“For someone who loves the game and has such a passion for it, it’s never a day at the office for her,” said 2010 Fighting Irish graduate Melissa Lechlitner. “She wants to be there. It’s not always about wins and losses; it’s about seeing her players grow.”

McGraw coached at Archbishop Carroll High School in Radnor before moving on to college basketball at Saint Joseph’s, Lehigh, and ultimately Notre Dame.

“She’s been as important to the women’s game as Pat Summit and Tara VanDerveer or Geno Auriemma,” said Hall of Famer Ann Meyers, who presented her with the honor. “What she’s done as a coach and as a wife and mother, to be in the Hall of Fame is the highest compliment you can receive in this world. She certainly deserves it.”