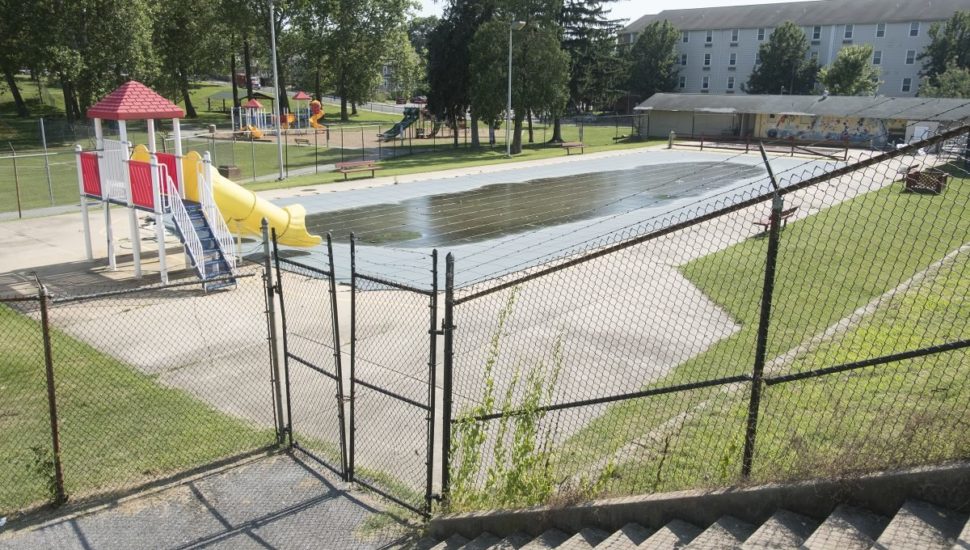 The swimming pool at Ash Park on Third Avenue in Coatesville has been closed since 2015. Image via Ed Hille, Philadelphia Inquirer.

The Ash Park swimming pool on Third Avenue in Coatesville has been closed for two years.

The one at Palmer Park on Ninth Avenue has been defunct for at least a decade.

Another summer marks another hot season without a pool for thousands of youngsters in Chester County’s only city, writes Erin McCarthy for the Philadelphia Inquirer.

According to a report published in August by the Brandywine Health Foundation, more than 80 percent of Coatesville residents surveyed think fixing community pools is an important or very important issue.

Coatesville officials, however, say that keeping pools afloat is a challenge for the city’s budget.

Last week, he started a GoFundMe page where residents can raise money to repair the Ash Park pool, which has not been renovated since 1972, and have it reopened, hopefully, by next summer.

City Councilwoman Linda Lavender-Norris said was heartened to see that the community is passionate about the problem.

“We want to open that pool for our residents, without a doubt,” she said.

Click here to read more about Coatesville’s swimming-pool plight in the Philadelphia Inquirer.

TourismLongwood Gardens Plans Its Most Ambitious Makeover Ever … to the Tune of $250 MillionFebruary 21, 2021