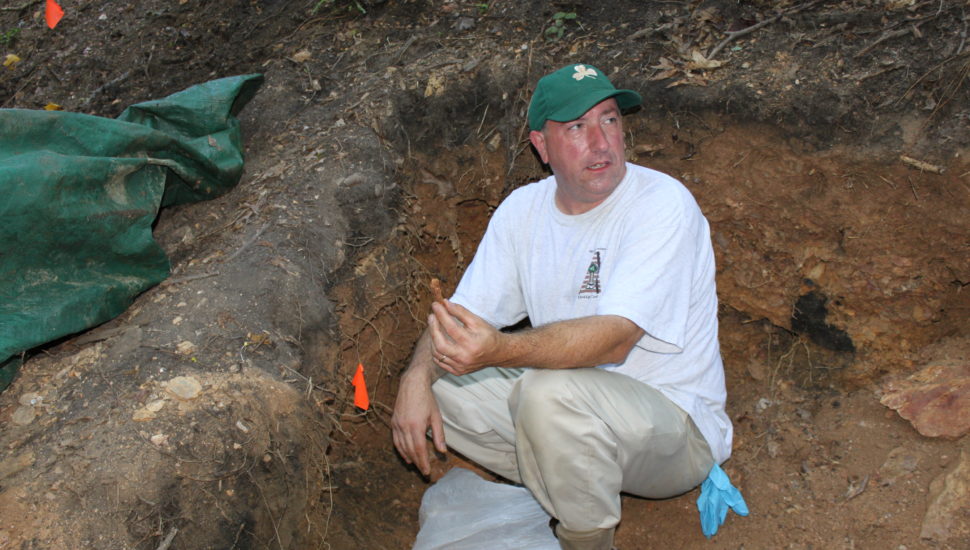 On Saturday, April 1, at 7:30 PM, Immaculata University will be the location for a screening of a new documentary on Duffy’s Cut from Irish American Films entitled The Cut: The Journey of the Men and Women of Duffy’s Cut.

The documentary is produced and directed by Shawn Swords with William Watson, a history professor at Immaculata who serves as a historical consultant, in addition to his role as director of the Duffy’s Cut Project.

The screening will be held in the Green Room with a Q&A following the film.

Several recent Immaculata alumni who continue to assist Dr. Watson with excavation at the Duffy’s Cut site participated in the film as reenactors. They include:

The Cut: The Journey of the Men and Women of Duffy’s Cut is a feature-length documentary film about the 57 Irish railroad workers who arrived in Philadelphia to build mile 59 of the Philadelphia and Columbia Railroad and died near Malvern within six to eight weeks of violence and cholera.

The Irishmen were from Donegal, Tyrone, and Derry in Ulster, with an average age of 22.

A project, headed by Dr. Watson and his brother Rev. Frank Watson, has been underway since 2002 to locate the graves of these workers and properly rebury them. To date, the graves of seven workers have been excavated. Work is ongoing to recover the remaining 50 bodies.

“This documentary is the newest and most extensive coverage of the Duffy’s Cut story, and it places the events at Duffy’s Cut in the context of other 1832-era deaths of Irish immigrant laborers elsewhere in Chester County,” said Dr. Watson. “The film discusses the possibility of the site being the location of the worst mass murder in Pennsylvania history.”

Attendees are asked to donate $5 in support of the nonprofit Duffy’s Cut Project. For more information on the screening, please contact Dr. Watson at 484-323-3491. More information on The Cut can be found here.