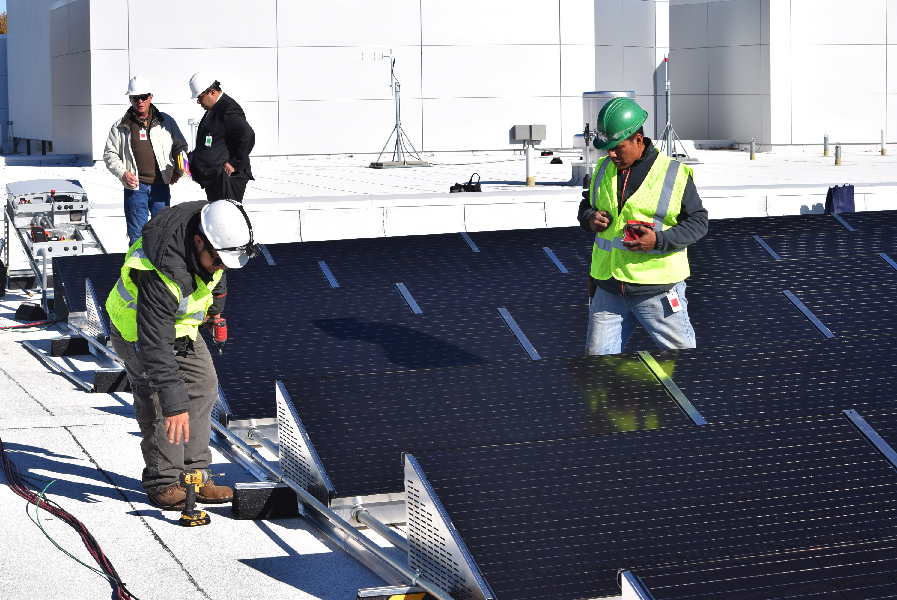 The North American headquarters of one of the world’s largest building materials companies is located right here in Chester County.

The roots of Saint-Gobain, the longest-tenured corporation in the Delaware Valley, can actually be traced back to an entire century before Philadelphia’s favorite son ever inked the Declaration of Independence. The company was founded more than 350 years ago by King Louis XIV of France to manufacture glass for the Hall of Mirrors at the Palace of Versailles in Paris.

If only Louis the Great could see what Saint-Gobain has since become.

Last year, the company lifted the curtain on its new, state-of-the-art North American corporate headquarters, located at 20 Moores Road in Malvern, to mark the culmination of a yearlong celebration commemorating Saint-Gobain’s 350th anniversary. The 320,000-square-foot campus, situated on 65 acres, underwent an 18-month, $80 million renovation to transform the long-dormant site into a dynamic showcase for Saint-Gobain and its North American construction materials subsidiary, CertainTeed Corporation. The next-generation workplace houses approximately 800 employees with room for many more.

The marvel of modern architecture was designed to take full advantage of Saint-Gobain and its family of companies’ extensive portfolio of products.

“Saint-Gobain and CertainTeed’s Headquarters was designed to demonstrate the power our products have to improve the quality of people’s lives,” said John Crowe, who oversees Saint-Gobain’s activities in North America. “It’s a shining example of how innovative companies can design, construct, and renovate sustainable, healthy, comfortable, and environmentally friendly buildings around the world.”

The glass-façade building recently received LEED Platinum certifications – the highest level – for both its interior and exterior.

The western and southern elevations of the façade – constructed with SageGlass, the world’s smartest electrochromic glass – represent one of the largest installations of the product in the world. SageGlass controls sunlight to optimize daylight and enhance comfort by preventing glare.

Inside the building, more of the company’s materials sanitize the air and dampen sound. The interior features an open-concept office space, 116 collaborative spaces, a cafeteria and smaller eating spaces, and an on-site fitness center. The campus also boasts 1.3 miles of walking trails.

The tours, which are eligible for 1 or 1.5 AIA or GBCI credit(s), provide insight into the integrated design, construction, and operations of the headquarters.

“We’ve already opened our doors to more than 14,000 visitors over the past year,” said Crowe. “With accreditation, we are eager to welcome even more architectural and design professionals from across the region, so they may experience the design elements intended to improve thermal comfort and indoor environment quality, specifically acoustics, air quality, and natural daylighting.”

A truncated version of the tour, with an emphasis on the building’s CoolStar™ Solar Reflective Roofing and newly unveiled solar panels, was given to VISTA Today this week by Tamara Mueller, Manager of HQ Communications for Saint-Gobain.

“Sustainability is at our core,” said Mueller, “and this, as you can see, sets the standard for energy efficiency.”

The solar project, which utilized Solstice 265W monocrystalline panels by CertainTeed Solar, was developed by the Berwyn-based Alternative Energy Development Group, and subsequently installed by Keares Electrical Contracting in Downingtown. “It took a year and a half for the (roofing) system to be properly designed, contracted, and approved for zoning and construction,” said Chris Fraga, the founder and CEO of AEDG. “But it was physically constructed – the racking, the panels, the inverter – in literally one day.”

Since Saint-Gobain does not own the building, but has a long-term lease, it was important to both tenant and landlord to ensure the integrity of the roof.

“As part of the development process, we met with Saint-Gobain’s safety and risk consultants and the building’s third-party owners to make sure the roof would not be compromised, and all stakeholders’ needs were achieved,” said Fraga.

“As a result, the building serves as an example for how companies that are energy efficient and sustainability-minded can work together to move forward with a solar-array installation that has significant benefits for both building owner and occupant.”

Meanwhile, Saint-Gobain’s research team is continuously measuring the performance of the building and the impact of its products.

“There’s been a 150 percent increase in productivity – of incoming calls being converted into lead opportunities,” Mueller said.

Saint-Gobain was previously anchored on Swedesford Road along Route 202 in Tredyffrin Township a mile west of King of Prussia, and the company elected to keep its headquarters in the region to retain its well-established talent base and continue its contribution to the financial vitality of the Greater Philadelphia area.

“Our products have been used in some of the most iconic buildings of the modern age from the Hall of Mirrors at Versailles to the glass pyramid at the Louvre to the Statue of Liberty and One World Trade Center,” said Crowe.

“It was time for us to create a space here in North America that honored the accomplishments of 14 generations of innovation and dedication to improving a building’s environment. Furthermore, we needed a space to enable our most important asset — our employees — to create the next chapter of our innovation legacy.”

For almost four centuries, Saint-Gobain has been a part of the fabric of human history, advancement, and improvement.

But the company’s new stomping grounds in Chester County prove that it may just be getting started.