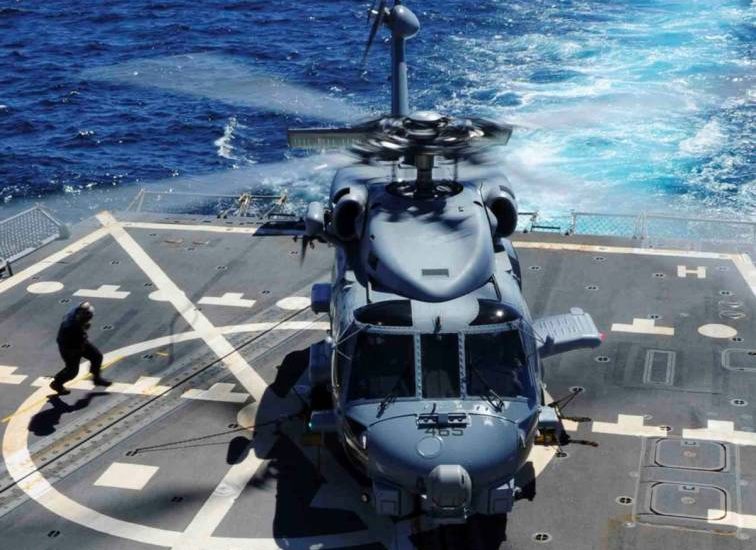 An HSM=46 helicopter aboard the USS Winston S. Churchill in the Atlantic Ocean.

There’s nothing easy or automatic about hard-wiring the Navy’s most technologically advanced combat helicopter, and an autopilot electrician’s mate from Coatesville is flying high from the thrill of it.

“It’s a very exciting job that I get to do day to day,” Helicopter Maritime Strike Squadron 46 Petty Officer 2nd Class Chris Kennedy said in a Navy-provided feature for The Times of Chester County. “… This is one of the best commands in the Navy in terms of people who hold a standard well above anything else.”

The Florida-based “Grandmasters” keep the blades spinning on the MH-60R Seahawk submarine hunter and anti-surface war chopper, “the most capable multi-mission helicopter available in the world today,” the article stated. “It is used for a variety of missions, including hunting and tracking enemy submarines, attacking enemy ships, search and rescue, drug interdiction, delivering supplies and supporting the Navy’s special operations forces.”

Kennedy, a 2005 graduate of Coatesville Area High School, is one of the squadron’s roughly 270 men and women charged with safeguarding the Navy’s Seahawks.

“The mission of HSM-46 is to embark and deploy combat-ready helicopter detachments around the world. Kennedy is a big part of why we are so successful,” Commander Chris Richard said in the article. “They have a tireless work ethic and embody our squadron motto of ‘Set the Standard.’ I’m very proud of Kennedy.”

Read more about Kennedy and his role in the Navy in The Times of Chester County here.