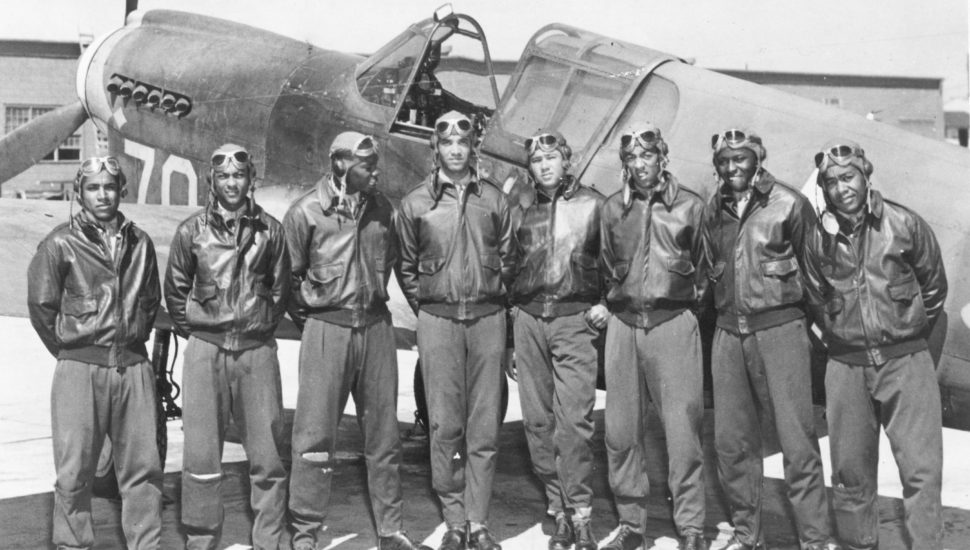 Eight Tuskegee Airmen in front of a P-40 Fighter--via Wikipedia.org

Members of the famed Tuskegee Airmen, the heroic  World War II unit that was instrumental in paving the way for a desegregated military, visited middle and high schools in Phoenixville on Thursday, bringing a part of living history to local students, writes Eric Devlin fro the Daily Local News.

The presentation was part of the series of events for Black History Month and gave Eugene Richardson Jr., Nathan Thomas, and Aaron Watkins the opportunity to talk to local students talk about the history of WWII airmen and the impact that the Tuskegees’ service had on the U.S. Army.

“It’s a part of our country,” pointed out Richardson. “Our country is changed today because of the Tuskegee Airmen.”

After being refused from training and serving as pilots in the army during WWII due to the color of their skin, a group of young black Americans stood up to institutional racism and segregation with the help of black activists, press, various political groups and the support of presidents Franklin Roosevelt and Harry Truman and First Lady Eleanor Roosevelt. The pressure caused the Army to reverse its position, if begrudgingly, and start accepting black applicants into its flight program.

It did not take the new cadets from Tuskegee Flight School long to not only prove that not only were they are as good as their white counterparts, but also to create one of the best units in the nation’s WWII air force. Called the Red Tail Angels, the group successfully flew 200 missions protecting bombers from enemy fighters, among many other duties.

“President Harry Truman ended segregation in the military based on the performance of Tuskegee Airmen,” commented Richardson. “The military is desegregated. All kinds of great things are happening in our country. Women and all kinds of groups are being able to pursue their careers in the military. And we have a stronger, better military for it.”