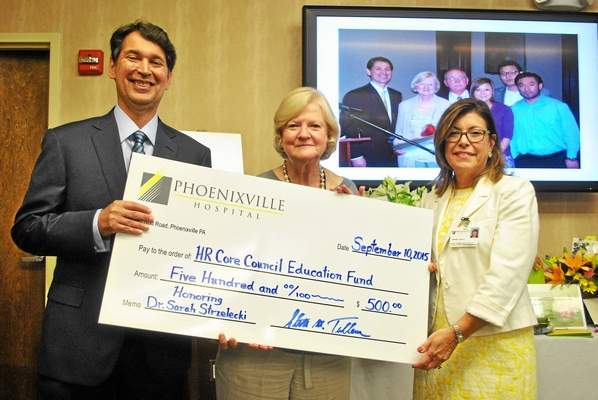 An ever-changing challenge to care for her community was the right medicine for Phoenixville Hospital Chief Nursing Officer Sally Strzelecki, who retired this month after more than 47 years of dedicated service.

“I stayed at Phoenixville because when I was ready to do something different, there always seemed to be something different for me to do in terms of nursing, growth and challenges,” Strzelecki said in a recent Phoenixville News feature. “I always wanted to have a career, but I wanted to be someone who could combine careers of being a wife, a mother and a nurse. As you move up into administrative roles, your days are long. I wanted to be able to not waste time traveling, so I stayed at Phoenixville, and it’s been a great career.”

Over the decades, the Phoenixville native made her rounds in pediatrics, nurse management, staff development and eventually executive leadership. She also studied up on the latest in nursing through a certificate and bachelor’s, master’s, doctorate and executive MBA degrees from St. Joe’s School of Nursing, West Chester University and Temple University.

“I can say without reservation that Sally is the best nursing leader that I have ever had the pleasure of working with at my side over my long professional career,” CEO Steve Tullman said in the article. “It goes without saying that I will miss her camaraderie, support and steadfast commitment to the highest standards of quality and service.”

A special ceremony recently honored her many years of care and achievements.

“The accolades were overwhelming to me, almost surreal by hearing people talk about me and say all the things that were said,” Strzelecki commented. “I thought, that must be a different person in the room. When you grow up in nursing and it’s your career, you make a commitment to do a lot of things for the betterment of our patients that we take care of, and you don’t do it for accolades. So hearing all that was just overwhelming for me.”

Strzelecki plans on continuing her care for the community through volunteer service as current board president of both The Clinic and Church Housing, which includes St. Peter’s Place and Episcopal House.

Read much more about Strzelecki’s career and reflections in the Phoenixville News here.

HealthcareDecember 4 Afternoon Update on COVID-19: State's 11,763 New Cases the Most in a Single Day Since Pandemic BeganDecember 4, 2020