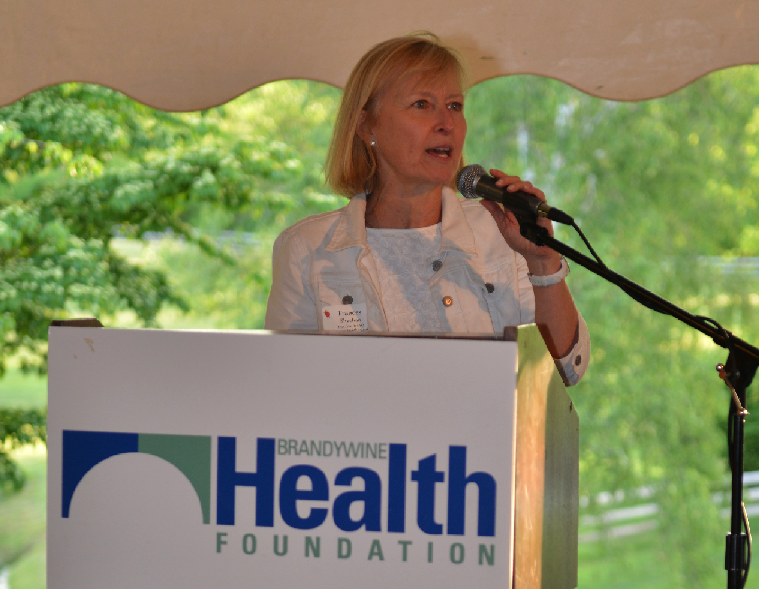 Frances Sheehan is leaving the Brandywine Health Foundation, an organization she launched 15 years ago, to lead the newly formed Crozer-Keystone Community Foundation in Delaware County.

If someone were to launch a community organizer’s Hall of Fame, Frances Sheehan would be a charter member.

In the 14 years she has led the Brandywine Health Foundation, taking over in 2001 after a dozen-year stint leading Chester County’s Planned Parenthood office, Sheehan’s small foundation team has raised and distributed $14 million in grants to Coatesville area organizations. She is committed to improving the physical and mental well-being of area residents and revitalizing the Coatesville community, as she says, “so that everyone here can live and grow up healthy.”

VISTA Today: Where did you grow up, Frances? Frances Sheehan learning to walk as her mother looked on.

Frances Sheehan: I was born in England the oldest of four children. My parents came to the United States when I was a baby. I became a U.S. citizen as a teenager.

My father was part of the British Brain Drain of the late 1950’s where American companies recruited British scientists. Both my parents grew up during World War II.

VT: Your parents lived through the World War II. How did that experience affect them?

FS: My Dad experienced the war in England. My mother, on the other hand, was the daughter of an active military officer. She lived in South Africa and the Middle East and was in the caves of Malta as they were being bombed.

Both my parents were stiff upper-lip people who did everything with resolve. When we moved to the United States their expectation for me, my two sisters and brother was that we make something of ourselves. Education and hard work were key.

VT: Were your parents’ expectations a burden? Her saying is similar to a line I heard Louis C.K. say recently in a comedy routine, that it’s hard “to be sad and useful at the same time.” That’s the way we operated. We were busy, we had a sense of purpose and responsibility.

VT: What was your first job?

FS: My very first job at home, for which I was not paid, was ironing my father’s handkerchiefs. Outside of the house, I was a babysitter, and I sewed Halloween costumes and bridesmaids’ dresses.

When I babysat, once the kids were in bed I would tidy up the house and do the dishes if there were dishes in the sink. The goal was to have the people return from their night out to an organized home. I was being paid to work, not sit around.

As a result, my sisters and I, who were all one year apart, were very popular babysitters. The phone was always ringing asking about our availability to babysit. If I wasn’t free, they would ask for my sister Maura, and, if she wasn’t available, then my younger sister Catherine. Frances as a 16-year old wearing a plaid jacket she made.

VT: After high school, where did you go to college?

FS: I went to Wesleyan University in Middletown, Connecticut.

VT: Was Wesleyan your first choice?

FS: Wesleyan was my only choice! I applied early decision to Wesleyan. About December 1st, as the decision date approached, I suddenly woke up and realized I was in a real bind if Wesleyan said no – “who the heck did I think I was?!”

No one had told me I needed a backup plan just in case Wesleyan didn’t come through. Parents just weren’t as involved in the application process back then as they are now.

VT: Was Wesleyan a good choice for you?

FS: Yes, it was. Wesleyan had a variety of students and plenty of room to explore a lot of different interests. I majored in Early European History. At Wesleyan, I learned how to write well, how to ask good questions, to explore the world around me and to think critically.

I tell anyone who asks how to use their time wisely in college to learn how to write well, learn how to think, be exposed to a variety of things and opportunity will follow.

VT: That was a great time to be in college.

FS: It was a great time to be in college but graduating in 1979 was not great! The economy the year I graduated was terrible.

VT: What was the big break that got you to where you are today?

FS: I started out as a community organizer and was always a big believer that the only sure way to improve a community was to get people engaged. The people in a community have to want change for that change to be sustainable. About that same time I figured out that if I wanted to run an organization I had to establish myself as a leader early on. Even if I was leading a small organization, I knew if I did a good job and the organization was successful and grew, I would be perceived as a leader.

The other thing I knew I had to do was develop an ability to raise funds. Whether it’s selling a product or a cause or inspiring other people to become engaged in your organization, I knew I had to learn how to raise money if I wanted to lead.

Even with a great staff, and I have always had fabulous staff, sometimes people want to see the CEO, see who is running the shop. A leader of a nonprofit has to be able to engage people and ask of their time, resources, finances, and connections. Without that ability, a person can’t lead an organization.

VT: When did you discover you had a natural ability to lead?

FS: An element of my leadership discovery was being the eldest child. Another factor was being an immigrant. As an immigrant, I was already different, or I saw myself as being different. I was already not a follower. I had to be comfortable with that difference and figure out a way to use it to my advantage. I remember my senior year in high school when I graduated, and we were all there in our caps and gowns, the principal was announcing the student awards. One of the awards given out every year was a leadership award that all the department chairs collaborated on. The award recipient was to be a surprise.

I hadn’t thought much about it and figured the award would go to one of the star athletes or one of the popular girls. When the principal called my name and announced I was that year’s recipient, I was totally shocked! That was the first time I knew other people viewed me as a leader.

VT: What immediate challenges do you or the Foundation have?

FS: The first challenge is helping the community understand the role the Brandywine Health Foundation plays. We are unique and unlike any other foundation in this area. Although we’ve made close to $14 million in grants since we started in 2001, unlike many foundations we don’t just make grants.

We are also out there raising funds to bring new programs and services to the Coatesville area, all in an effort to revive and revitalize this community so that everyone here can live and grow up healthy. For instance, we had a regional funder, the Scattergood Foundation, give us a grant to bring the Youth Mental Health First Aid program to the Coatesville Area School District. We in turn helped the school district attract federal dollars for the program, and we just submitted another grant that would secure the program for the next four years.

We also just started an initiative to encourage people to remember the foundation in their wills and estate plans that would allow them to have an impact on the Coatesville community well into the future.

The other challenge we have is to determine what role the Brandywine Health Foundation should be playing in the redevelopment of Coatesville. We are not an economic development agency or an elected city council. We play a neutral role in the community so that everyone can feel comfortable becoming involved – we are here to do good and create positive change.

A good example of a role we’re beginning to explore is partnering with the Natural Lands Trust, the National Iron & Steel Heritage Museum, the Brandywine Conservancy, the YMCA, NAACP and other community groups to develop a master plan for playgrounds and parks in the Coatesville area. We’ve just hired a program manager who will be running that program as well as the Youth Philanthropy program Citadel is funding over the next five years.

VT: Where did your passion for the Coatesville area come from, Frances? FS: I had a wonderful staff and board at Planned Parenthood when I left there, and the Brandywine Health Foundation was an unknown, a completely new entity. I was the first CEO with a new board and the community wasn’t sure what this new foundation was all about.

I had some familiarity with Coatesville because I had helped build the Coatesville Center for Community Health, plus Planned Parenthood has a health center here. I knew a few people in Coatesville but not too many.

I took the job at the time because it was an opportunity to do good works while staying connected with Chester County’s elected officials and nonprofit world.

But I didn’t know at the time how the job was going to evolve. Over time, there have been many wonderful opportunities to make a difference and form very strong relationships.

VT: Finally, Frances, what is the best piece of advice you were ever given? FS: I guess it would be what my mother said about making yourself useful. The phrase is synonymous with ‘Service Above Self,’ the Rotary’s motto. To me, the phrase is the key to a meaningful and rewarding life. As a society, we place too much emphasis on “being happy.”

Being happy gets confused with having things and life being easy. Having a life of meaning is very much about using and developing your talents and skills so that you can make a positive impact on the world.

I work with amazing people in a promising community where I have that opportunity every single day.