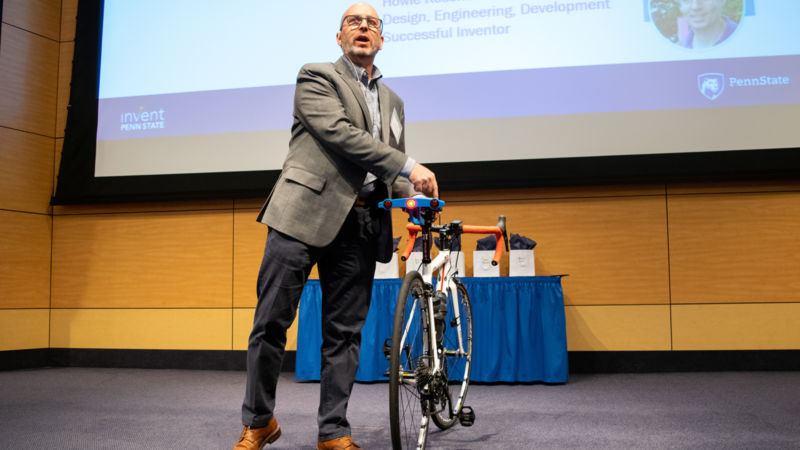 One summer day in 2017, after finishing a bike ride, Glenmoore resident Doug Thompson got home and began reading the latest issue of Bicycling. The magazine laid out a harsh reality: 50,000 bicycling accidents and 1,800 fatalities per year in the United States. Most cyclists hit by cars were struck from behind, never seeing what was coming. The numbers were much higher than what Thompson, an avid cyclist, would have expected.

Another statistic jumped out at Thompson, too: If cyclists were to add lights to their bicycles, it would significantly reduce their chances of getting hit, even during the day. Thompson inspected the rear light on his bike — small and nested on the seat post. Most other bicycle models had similar light placement. Yes, the rear lights helped increase visibility, but could more be done?

Then, it hit Thompson: Three lights.

“When you approach the rear of a car, there are two taillights and then the center light. It gives you depth perception and it also gets your attention,” Thompson said. “I started sketching … (and) I got to this point where I started looking at the seat post and the seat rails. It hit me that no one was doing lights that attached to the seat rails and came out from behind the rider, bringing the lights closer to the car.”

After a trip to a local craft store, Thompson cut pieces of foam core and glued them together to create an initial model of “The TailWin!” that he attached to the back of his bike and tested. One of Thompson’s entrepreneur friends referred him to a designer in Colorado who 3D-printed a prototype.

Thompson pitched The TailWin! at the West Chester University Business Idea Competition earlier in the year and was eager to continue sharing and promoting his idea. When he learned about the Penn State Great Valley Lion Cage pitch competition through the Ideas x Innovation Network (i2n), he jumped at the opportunity.