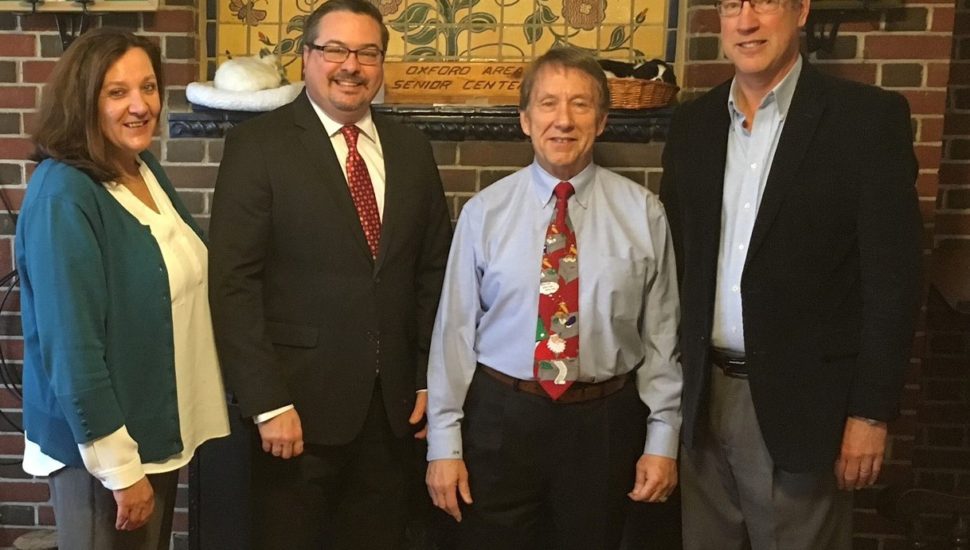 From left: Cheryl Kuhn, SCCC President, Doug Doerfler, Chairman of the Board, Jim McLeod, and John Jaros, Immediate Past Chair.

The Southern Chester County Chamber of Commerce has named Jim McLeod its 2017 Outstanding Citizen of the Year, and will honor him at its 51st Annual Dinner on Saturday, Feb. 17 at Longwood Gardens.

In the picturesque setting of Longwood’s Conservatory, the annual dinner attracts business and community leaders for an evening of live entertainment, dinner, dancing, and silent auction. Tickets are $175, with sponsorship opportunities available. Click here to learn more.

The Outstanding Citizen of the Year Award recognizes individuals who unselfishly contribute to the community’s quality of life and display exemplary volunteer efforts demonstrating vision, leadership, and citizenship that positively impact the Southern Chester County community.

“Jim McLeod is an exemplary example of community service,” said Cheryl Kuhn, SCCCC President. “His tireless work in our community and his ability and desire to bring people together to work toward a common goal is truly outstanding.”

McLeod has a long record of service at the local, county, and state levels. He served two terms on the Board of Directors of the Pennsylvania Automotive Association, was appointed to the association’s Legislative Committee, and served on Ford Motor Company’s Zone Dealer Council representing Ford dealers in Pennsylvania and Delaware.

McLeod is a member of the Fulton Bank Brandywine Division Advisory Board and with Oxford Rotary for 28 years. He was a founding board member of the Jennersville YMCA, serving for 30 years, two terms as chairman, and oversaw fundraising and building.

The Outstanding Citizen of the Year Award has been presented annually since 1968.

Past recipients of the award include: