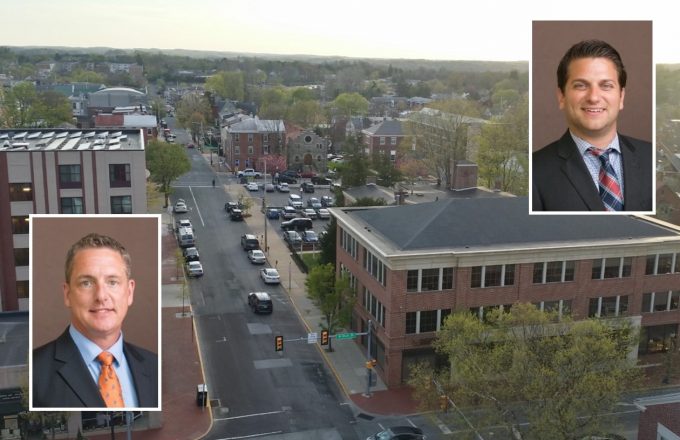 The Bancorp, a Wilmington-based trailblazer in financial services that has distributed more than 75 million prepaid cards in the U.S. and processes $232 billion every year, is coming to West Chester.

The outfit has grown far from its roots as a branchless commercial bank to become a leader that now offers private-label banking and technology solutions to non-bank companies ranging from entrepreneurial startups to those on the Fortune 500.

The borough will be home to The Bancorp’s newest division, a think-tank-style workshop where its employees can collaborate more freely than they otherwise could in a traditional office setting.

The Bancorp will occupy the top floor of the DNB First building, located at the corner of Market and Church streets, that was gutted by a three-alarm fire in the summer of 2015.

Whereas the company’s arrival is a major coup for West Chester and the diversity of its corporate landscape, it’s just business as usual for Eric Kuhn and Andrew Turner, the associates at Pillar Real Estate Advisors, the commercial real estate brokerage firm on West Market Street that serviced Bancorp.

“They’re a global facilitator of financial services inclusive of gift card fund retention and disbursement,” Kuhn said of Bancorp. “We are excited to have been able to help bring them to West Chester. We showed them about five locations that met the majority of their criteria, but the borough was the right fit for them.

“They wanted a cool space with a Google feel to it – an open vibe that was rustic with brick and exposed spiral ducts. They loved the original brick walls, columns, and overhead beams. They’re going to trick it out with white boards, and every flat surface will have something super high-tech on it.”

According to Turner, Bancorp was quite particular with what it wanted: an ecosystem where its millennials could live, work, and play.

Downtown West Chester, of course, offers a great combination of the three.

“It wasn’t only about the look of their space, but also the environment as a whole, and how it needed to be conducive for their demographic,” said Turner.

The Bancorp is just the latest on a list of Pillar’s clients that reads like a Who’s Who of brand-name businesses in the Delaware Valley.

Pillar Real Estate Advisors represents commercial buyers, sellers, landlords, and tenants, and prides itself on being an expert in the local market, with a keen focus on Chester County. Its level of service affords its clients the comfort of knowing that they’re represented by a company, the actions of which are upheld by the “pillars” of a higher standard.

On the flipside, Chester County is fortunate to have a team like Pillar advocating on its behalf, championing the region’s many strengths and luring businesses that ultimately contribute to the local economy.

“Bancorp could’ve gone anywhere, but they chose West Chester,” said Kuhn. “That’s a nice shot in the arm for the borough.”

Real EstateCenter City's CRE Vacancy Rates May Be Lower Than Chester County's, but Perhaps Not for LongJuly 13, 2021