Vanguard Gives Back with Community Garden 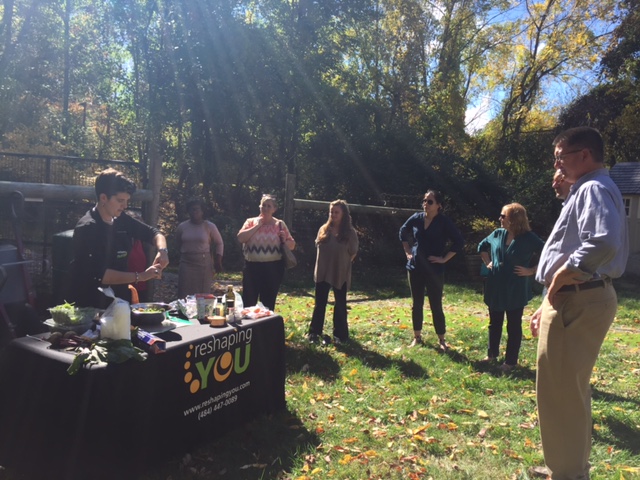 In 2012, Triskeles approached Vanguard about its Food For All program, “a garden program for organizations to build community and increase access to fresh, healthy food,” according to the Triskeles website.

The garden offered Vanguard an opportunity to provide food to local agencies and volunteer opportunities to employees on site. They would also have the legacy of establishing the first corporate garden of its kind in Chester County, which would, in turn, set the stage for future Food For All gardens around the region.

Excited by the opportunity, Vanguard quickly got to work surveying their land along with Triskeles experts, recruiting volunteers, and installing a 21-bed garden on campus.

Now in its fifth season, the Vanguard garden has provided nearly five tons of produce to area shelters and pantries, including the West Chester Food Pantry, PACS, and the Good Samaritan Shelter in Phoenixville.

Led by a team of 10, including Johanna Gilbert as project lead, Amy Low as volunteer outreach, and Melinda Bloomfield as event coordinator, 200 employees volunteer each year to plant vegetables, water, harvest, and weed the garden.

A variety of vegetables are harvested each year, including greens, beets, peppers, eggplant, squash, and tomatoes, just to mention a few.

Since some of the vegetables harvested are deemed as a challenge to prepare, Vanguard offers healthy cooking demos in their garden twice per year. These events provide employees with basic recipe ideas and cooking techniques to use at home.

“One of the great things about working at Vanguard is its ‘giving back’ mentality,” said Bloomfield. “The Vanguard Community Garden is an extension of that, but instead of one or two volunteer days a year to get out and help the surrounding communities, the garden allows us to contribute almost year-round. ”

“Also, working in the garden and watching our crops grow is rewarding in itself, especially, I think, for crew who are not fortunate to have their own gardens at home.”

Gardens have since been installed at QVC, the Phoenixville YMCA, senior centers, and various companies around the region. Vanguard acts as a mentor to Food For All program participants.

To learn more about the Triskeles Food for All Program, click here.

To learn more about Vanguard Gives Back initiatives, click here.