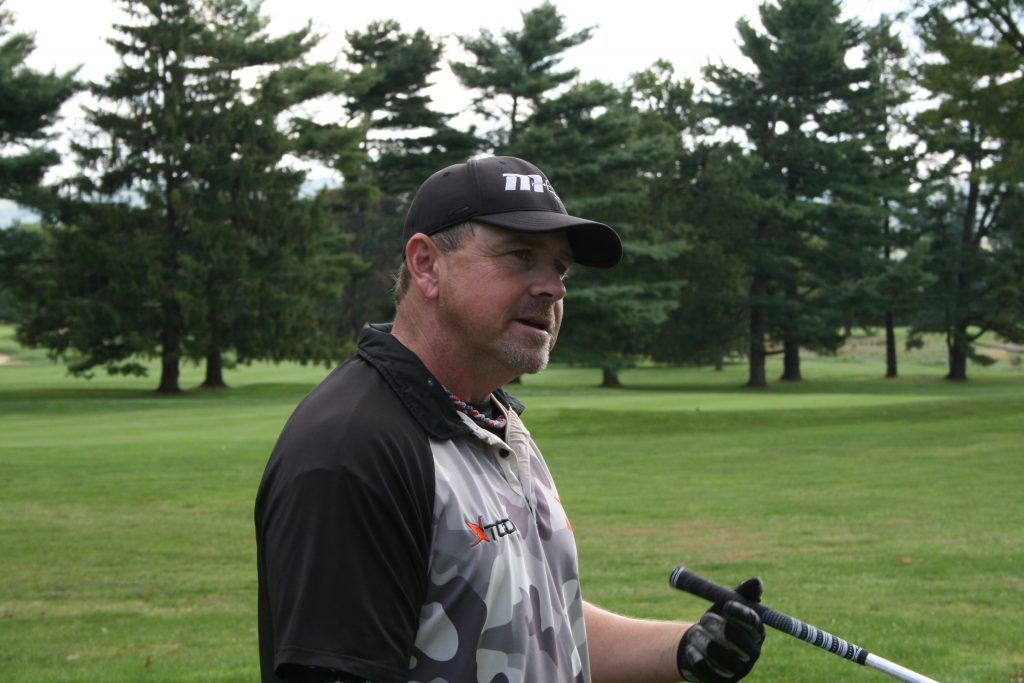 Jeff Crittenden on the 16th hole at Whitford Country Club. The sonic booms that could be heard periodically throughout the day last Monday were actually the sound of Jeff Crittenden’s tee shots at the 16th hole of the Whitford Country Club.

The Unionville native, currently the world’s fourth-ranked long driver, was stationed at the 561-yard Par 5 on the back nine. He was raising money for charity, blasting tee shots that looked like comets streaking across the sky, seemingly bound for Exton Mall.

Crittenden, the Director of Golf at Kennsington Golf Club in Canfield, Ohio, and nicknamed The Critter, had returned to Whitford for the second year in a row.

He was the special guest at Hankin Group’s 30th Annual Golf Invitational, which raised more than $240,000 for Handi-Crafters, a Thorndale-based organization that provides employment opportunities and other supportive services for individuals with disabilities.

“This is an awesome event, and I’m glad to be here for such a great cause,” said Crittenden, 45, a former baseball player at Millersville and Widener who has the upper body of a linebacker. His longest drive ever recorded is 491 yards. “Plus, it’s good practice for Worlds (the World Long Drive Championship), which is next week (in Thackerville, Okla.).”

Crittenden attended Unionville High School with April Ennis-Pierson, the Director of Development at Handi-Crafters, who reconnected with him through Facebook.

“Jeff is extremely generous of his time, and we love having him,” said Ennis-Pierson. “It’s a win for everyone.”

Handi-Crafters was well represented at Whitford, as Hankin Group’s charitable donation is a key piece of its operating budget.

“We’re fortunate to have a great partnership with Hankin,” said Karen Baker, the president of the board at Handi-Crafters. “There’s a lot of work that goes into bringing this together, and it’s wonderful to have that Hankin strength and support behind us.”

Michael Hankin, the Chief Operating Officer of Hankin Group, serves on the board at Handi-Crafters as its treasurer. In essence, the alliance of the two organizations ensures that no one is turned away from Handi-Crafters.

“Most of our clients come to us with funding from the state or the county,” said Peggy Eichelberger, the Director of Finance and Human Resources. “But we have some unfunded clients who are just as welcomed, and this helps subsidize them.”

Christine Helmig, the Chief Financial Officer at Hankin, is particularly fond of the services Handi-Crafters provides.

“We’ve gotten to know Handi-Crafters a lot better throughout the years, and it’s just an incredible cause,” said Helmig. “It’s so noble, providing jobs for people right in our neighborhood who need an extra hand.”

The Invitational was a four-person scramble, with two full flights, one in the morning and the other in the afternoon. On the 16th hole, golfers had the option of donating $10 for the opportunity to use Crittenden’s tee shot as their own.

“Although it’s a beautiful day, the conditions out here aren’t the best for driving,” said Crittenden, a real-life Happy Gilmore who finished as runner-up at last year’s World Long Drive Championship. “I lasered a couple around 350 (yards), but I don’t think I’m getting much run on them.

“But we’ve raised a lot of money for Handi-Crafters.”