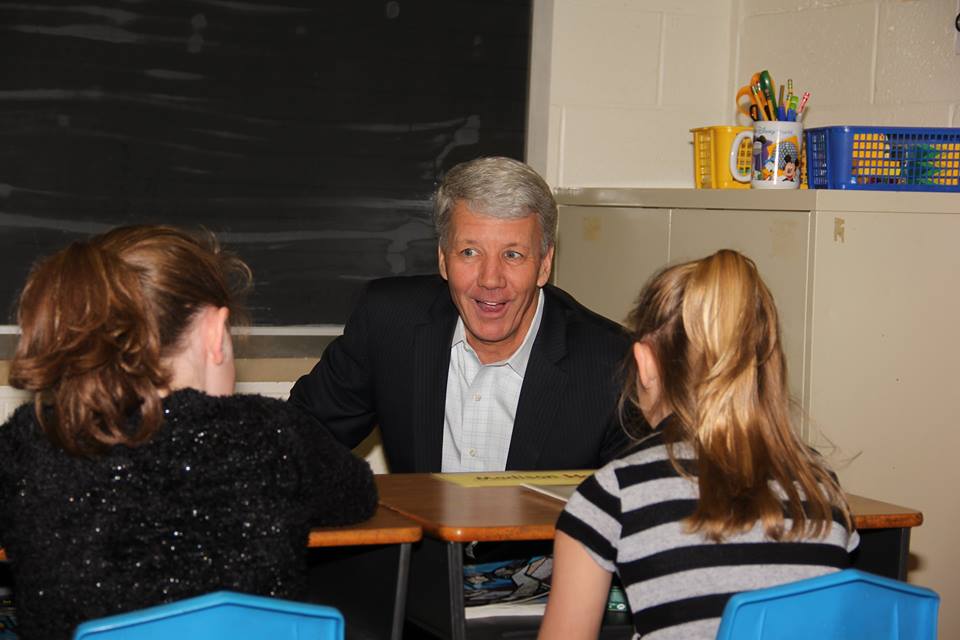 State Representative Tom Killion of Middletown Township, who is running in a special April election to fill the now vacant 9th State Senate seat*, talks with VISTA Today about growing up in Glenolden, developing a passion for street hockey when he was a kid, working his way up from dishwasher to head chef at the neighborhood diner, serving as a congressional aid and discovering he had a gift for public speaking and leadership and his involvement in Chester County business and civic life over the last 20 years.

Where did you grow up Representative Killion?

I was born at Misericordia Hospital in Philadelphia and grew up in Glenolden. My parents, who are both from Philadelphia, moved to a row home in Ridley Township when I was one and then to a twin house in Glenolden a couple of years later.

What do you remember about growing up in Glenolden?

Even though we lived in a twin house, the neighborhood was full of row homes with lots of kids. Just by walking out the door, we could put together 18 guys to play baseball, football, basketball or later, street hockey. It was about that time the Flyers won their first Stanley Cup, so we played hours and hours of street hockey. We left the house at 8 AM on Saturday morning, and we didn’t come home until it was dark. It was a blast!

Sports played a big role in your life. What sports did you play in high school?

I didn’t play sports in high school. I wanted to play ice hockey at Cardinal O’Hara where I went to high school, but it was expensive and my parents just didn’t have that kind of money. I ended up playing a lot of club hockey. When I graduated high school, I opted to go to Penn State’s Brandywine Campus in Media where I played. Then when I transferred to Main Campus a couple of years later, I played on a great intramural ice hockey team.

Of all the sports I played when I was younger, I enjoyed street hockey the most. I loved watching the Flyers. We didn’t have money to go to the games, but we watched every game on TV.

What jobs did you have when you were a kid?

Like a lot of kids, I delivered newspapers – the morning Inquirer. The first real job I had was washing dishes at the Norwood Diner on Chester Pike. Their Sunday breakfasts were packed. I had to really hustle to keep up. Sometimes the sweat poured off me. But by the time I left for college, I had worked my way up to head cook.

What lessons did you take from that job that you still use today?

I learned how to work and work hard. Norwood Diner was an “intense” place to work. I had fifteen friends work at the diner, only three of us stuck it out.

Did you spend much time at the Bazaar on Baltimore Pike when you were a teenager?

The Bazaar was a great place! We used to walk from our house, cut through the woods, just to get to the Bazaar. I loved that place. As a teenager, I must have walked 100 miles around the Bazaar altogether.

Why did you decide to go to Penn State?

I was always a fan of Penn State’s football team. After high school, going to Main Campus would have been too big of a stretch for my parents, so I applied and was accepted at the Delaware County Campus. Back then, the Delaware County campus was small, just one building, so I received a lot of individual attention. By the time I got to Main Campus a couple of years later, I was already comfortable and had a great group of friends.

Did Penn State end up being a good choice for you?

It was. One thing about Penn State is the place shrinks within your major and your circle of friends. Both my daughters ended up graduating from Penn State as well.

When did you first figure out you wanted to work in public service?

My mom was a die-hard Republican and listened to a lot of talk radio. No one in my family, however, not even my mother, was involved in politics or government. I was a Criminal Justice major at Penn State, and one of my assignments was to do an internship. I sent a letter to the Court House in Delaware County and landed a position in Youth Services. I got to know some young people working there who got me involved in the Young Republicans and eventually I joined a couple of campaigns.

Killion with daughter Rebecca (circa 1987)

When did you go to work for Congressman Kurt Weldon?

I graduated from Penn State in 1979, got married to an O’Hara girl in 1983 and went to work for State Farm at the corner of Routes 1 and 202. When Curt won, he went to State Farm’s management and talked them into giving me an unofficial five-year leave of absence, so that I could work in Weldon’s Congressional office.

What impact did the transition out of the private into the public sector have on your life?

It was when I was working in Curt’s office that I learned I could lead. Because Curt was in Washington, I filled in for him at local community events many times. I never knew I could be a public speaker, but I learned by doing. I got involved in the community, sitting on maybe 15 different non-profit boards. I was on the SEPTA Board and served on the board that raised the money to build the Rocky Run YMCA as well as led the effort to build the Rachel Cole Community Library. I got to know Delaware County and became known for my efforts to help improve the community.

When did it dawn on you that you wanted to run for office?

Why did you decide to run for State Rep?

After serving two terms on County Council. I went back into the private sector, running my own group benefits and pension firm. I missed public service and the opportunity to help people solve what were for them enormous problems. Matt Ryan, the former State Representative passed away. Again, community leaders came to me and encouraged me to run for Ryan’s vacant House seat. I ran, won, and have served in the State house since 2003

You’re running for a seat in the State Senate that spans both Delaware and Chester Counties. Is bridging both counties difficult?

I know and understand both counties well. I know a lot of people in Chester County, and the group benefits portion of my business was headquartered on the top floor of the Chester County Chamber of Business & Industry building on Paoli Pike. In fact, I served on CCCBI’s board for four or five years.

I also represented Westtown Township for my first ten years of in the House of Representatives, before it was redistricted after the 2010 census. The Chester County delegation in the House included me in their deliberations and I was an advocate for the interests of the county in Harrisburg. I also think that western Delaware County, where I’ve lived for the last 20 years, has a lot of similarities to a number of communities in Chester County.

I sat on the Delaware County Conservation Board for a number of years. We learned our lessons from Chester County and worked aggressively to preserve land. In Middletown Township where I live we have one of the best horse and walking trail systems in the area.

Looking into the New Year Tom, what are your biggest challenges and opportunities?

Number one, we have to get the state budget done and find a way to do it without raising taxes on seniors and working families. We also can’t put in place higher business taxes that will discourage small businesses from innovating and growing here in Delaware and Chester Counties. These are our employers and job creators. The strength and viability of our local businesses is a crucial component of a healthy regional economy. Tom Killion and wife Eileen (right) review family pictures with the couple’s two daughter Brittany and Rebecca and their spouses.

The second challenge is winning both the special election to fill Dominic Pileggi’s vacant State Senate seat on Primary Day, Tuesday April 26th, and the election for the same seat in the November General Election. I jokingly tell people, ‘I know it’s not Philadelphia but on Primary Day you get to vote for me twice!’, because they have to vote in both the primary and the special election on the same day.

Voting in both the primary and in a special election on the same day is different than what many people are used to, so we really need to educate voters about the process.

On a personal level, one of my daughters is getting married in October. I’m really looking forward to her wedding day, but between her wedding and the November election, it is going to be a very busy fall season.

What is the best piece of advice you ever received Tom?

Chuck Lewis, a person I worked with in Congressman Weldon’s office, once told me that the key to success is getting up in the morning and doing what you need to do all day long. Don’t procrastinate. Chuck told me that the only difference between doing it and not doing it, is doing it. Every time I think about putting something off until tomorrow, I think of Chuck’s advice and just do it.