Home Commerce Agriculture Larry Welsch: Working Around The Clock Making Sure No One Goes Hungry!

Larry Welsch: Working Around The Clock Making Sure No One Goes Hungry! 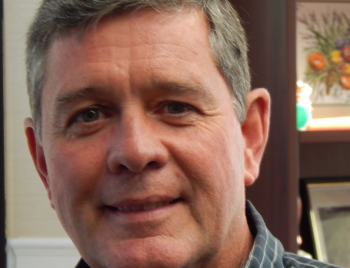 Working on a shoestring budget of around $4 million dollars, Larry’s organization of 13 staff members and some 4,000 volunteers plant, harvest, sort, prepare, package and distribute milk, vegetables, meat and complete meals to 70,000 county residents every year, individuals and families struggling to make ends meet.

Welsh sat down with VISTA Today recently to talk about growing up in Parkesburg, his first job managing fire extinguishers for his brother in law, how he got into, left and then came back to food services, and the genesis of The Chester County Food Bank, regarded by many as one of the the most innovative and remarkable food banks in the country.

VISTA Today:  Let’s start at the beginning Larry.  Where did you grow up?

Larry Welsch: I grew up in Parkesburg and went to Parkesburg Elementary School on Strasburg Avenue. I remember walking under the train tracks at Wilde’s (Funeral Home) when there wasn’t a train going overhead and climbing those steps every day. Parkesburg School with 60+ stairs school kids from Parkesburg’s south side climbed every school day. (Picture circa 1920)

In 1968, I went to Octorara Junior and Senior High School.  My class was the first 7th-grade class in the new Intermediate School building.  At the time, Parkesburg, Christiana, and Cochranville all had their elementary school buildings, so I got to make new friends as we met the kids from those schools, many for the first time.

VT: What was your first job?

LW:  My father, who was a steelworker at Lukens Steel in Coatesville for 41 years, never bugged me that much about working in high school or having a summer job.  His philosophy was I was probably going to work the rest of my life and didn’t care what I did as long as I did it to the best of my ability.

As far as a job goes, I did all the normal things a teenage boy at the time does; cut grass and shovel snow.  My first real job though was in the summer of 1969 when I was 13 years old.  I helped Jack Asetto, my brother in law who now owns the barbershop on First Avenue in Parkesburg, run his fire extinguisher business. Me and another relative would go to businesses and other industrial sites around Coatesville and exchange fire extinguishers.

VT: What lessons do you recall from that experience that stick with you today?

LW: That job was my first real foray into dealing with the public.  Even though folks weren’t always in a good mood, customer service was still important.  I’ve been in customer service positions ever since, so that job was good preparation for the rest of my life.

VT: What led to you becoming Executive Director of the Food Bank?

LW: My first year out of high school I ran the poultry stand at Weavers Farmers Market in Coatesville. From there I went to work for Bud Adams, who had a small food services business in Coatesville for several years. After a two-year stint with Keystone Helicopter at the Chester County Airport, I went back to the food service business with Mr. Adams.

By 2003, I had been in the food services business for 28 years and was a bit frustrated with the business.  That year I got a call from Patty Sobecki who asked me to consider running Chester County Cares’ gleaning program.  After asking, ‘what’s a gleaning program?’, I thought the program sounded pretty cool and went to work for Cares.

VT: How did that turn out? LW: As it turned out Cares hired me to replace Elmer Duckinfield, a 75-year-old volunteer Cares had running the gleaning program.  I was nervous.  I knew Elmer had worked very hard to get the gleaning program off the ground, and I didn’t want to tell him I was replacing him.  Turns out he was happy to see me because he was overwhelmed.  Over time, Elmer and I became great friends. In fact, Elmer still helps me here at the Food Bank.

A couple of years later when it looked like Chester County Cares was going to go out of business, Chester County’s Department of Human Services asked me to come to work for them. County officials want to ensure the flow of state and federal food flowing through the county continued.  From there, the Commissioners, with the help of philanthropist Bob McNeil, started thinking about the possibilities of a county food bank.

VT: Was the vision of what you wanted the food bank to be clear to you from the beginning?

LW: The County appointed an advisory board and together we immediately created the Food Bank’s first strategic plan.  The advisory board spent almost a full day working on the plan.  When finished, our strategic plan looked like any other food bank’s plan.  Up to this point, food banks had always been the dumping grounds of bad food.  Our Strategic plan was no different. Cans in cans out, that sort of thing. That all changed two days later when I got an email at 4:30 AM from Bob McNeil, the Food Bank’s Chairman, saying we have to do our food bank differently. Bob suggested that with the county’s vast agricultural resource, the Food Bank’s focus should be on eating healthier.  From there, we rewrote the strategic plan focusing this time on agriculture and nutrition, in effect saying, folks that didn’t have food would not receive bad food.

Today, five years later, we have 4,000 volunteers and 130 sites hosting 650 garden beds including gardens at 52 schools across Chester County. It’s amazing to me!  We came into existence in 2008 when the need was clear.  Then with Michelle Obama’s healthy eating initiative it all popped right at the right time. It’s all about health and eating healthy. VT: Is Bob McNeil still involved in the Food Bank?

LW: Yes, he’s very active! Bob spends thirty to forty hours a week working on Food Bank stuff. He just stepped down as Board Chairman but remains our Founding Chairman and leads our fundraising.

VT: As you look forward to the remainder of 2015, what challenges does the Food Bank face?

LW: Five years ago our budget was $65,000 and we were in a little two car garage on Main Street in Parkesburg.  Today that budget is right around $4 million we operate out of a 36,000 sq. ft. warehouse in Eagleview. For us, it’s always about identifying the right thing to do.  We’ve looked at different programs and said, ‘Is that program meeting the most needs that it can or is there something better we can do?’  In order to impact as many people as possible, we have to be the best at what we do.

The backpack program is a good example.  The backpack program is an expensive program to run.  Even though there are over 13,000 children in Chester County who qualify for a backpack, there is only enough money to fund 1,000 backpacks.  We always ask ourselves what could we do differently that would get more backpacks out to the children who need them. It’s frustrating at times because the opportunity is there, but you have to raise the money and recruit and manage the volunteers needed to sustain the programs.

VT: Finally Larry, what was the best piece of advice you were ever given?

LW: It was Bob McNeil saying, ‘Listen to people. Don’t have an ego. Work with anybody who has a similar mission to yours and work together to accomplish the goal.’  That’s what we have tried to do at the Food Bank.  It’s not about how big the Food Bank can be.  It’s about how many people we can get involved to meet the mission and accomplish the goal of alleviating hunger in Chester County.