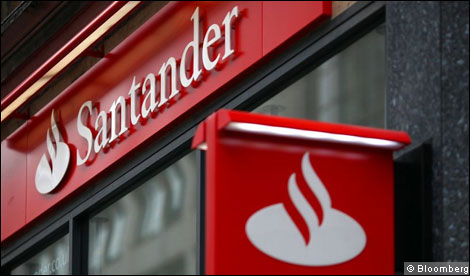 Santander Bank is the official bank of the Philadelphia Eagles, and apparently Europeans like the bank as well.

Euromoney Magazine has named Santander, which has 9 branches in Chester County, the Best Bank in Western Europe, Spain, Mexico and Argentina in its 2014 annual awards.

The international financial magazine highlighted the Santander Group’s geographic diversification and network of separately-capitalized subsidiaries in its selection.

Euromoney underlined the successful merger of Santander, Banesto and Banif in Spain in 2013, noting this was completed ahead of schedule and had achieved market share gains in customer funds and deposits, while cutting the cost of time deposits by 170 basis points. The magazine also said the bank “continues to tower above the other Portuguese banks” and was the only bank in that country that needed no state aid during the European financial crisis.

In Mexico, Santander expanded its portfolio by 12.6 percent, increased net earnings by 17.1 percent, and achieved the best efficiency rate among banks in the country. In Argentina, Santander Rio maintained its market leading position in loans and deposits from the private sector. In Puerto Rico, despite the difficult operating environment, Santander grew its profit by 40 percent.

This past spring Santander gave out jerseys displaying former Eagles safety Brian Dawkins’ retired number 20 to new customers. One of the most revered players in Eagles history, Dawkins led the team’s defense for over a decade. The Eagles inducted him into their Hall of Fame in 2012.

Euromoney, founded in 1969, is a recognized leader in business and financial news commentary and is read by senior executives, regulators and government officials in more than 170 countries.

Santander Bank, N.A. is a top retail bank in the United States by deposits.  Its main corporate offices are in Boston.

Banking & FinanceCheck Out Where Chester County Ranks Statewide for the Most Foreclosures in MarchMay 13, 2021