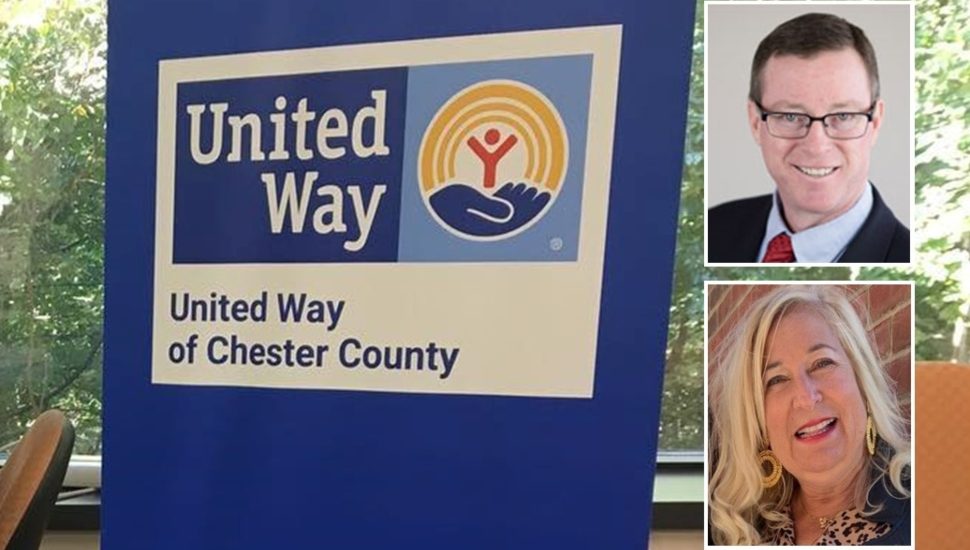 Doug Kaiser and Christina Wagoner have joined the leadership team at the United Way of Chester County.

For more than 75 years, the United Way of Chester County has made a better life for countless people in the community.

Two new additions to its leadership team are helping the nonprofit continue to fight for the education, income, and health needs of individuals by mobilizing the caring power of local corporations.

Doug Kaiser, UWCC’s Director of Development, has been on the job for seven months, but comes to the organization with years of experience working with the United Way. For much of his 25-year career at Bentley Systems in Exton, he was the corporate liaison to UWCC, and ran the company’s corporate donation campaign for several years.

The Downingtown native eventually sat on UWCC’s Board of Directors before leaving Bentley Systems for his current position.

“Bentley put me in the position where my second act could be with the United Way,” he said. “I became involved with the community and understood where the needs are and helped raise money for those needs. But I was looking for something more ‘hands on,’ and I feel this new position is my way of giving back after a long career in Chester County.”

Christina Wagoner, UWCC’s Director of Finance, joined the corporate leadership team right after the new year, having previously served as CFO of the Upper Main Line YMCA and as Senior Director of Finance for Surrey Services for Seniors.

“The nonprofits I worked for in the past had always been recipients of United Way funds, so now I’m on the other side,” she said. “Doug and I work together as a team, and we’re excited about going forward and setting our own flag in the ground.”

Last March, when the effects of the pandemic were beginning to be felt in Chester County, the United Way launched Chester County Stronger, a fund directed at supporting the needs that COVID-19 created.

“We initially collected about $750,000 that went directly to agencies that were helping with COVID relief,” said Kaiser.

The funds helped in various areas to keep the doors of nonprofits open and addressed food insecurity, COVID-19 testing, workforce development, and other basic needs.

“At first, we were working in a reactionary role,” he said. “It certainly did present some unique problems that we had to sit down, think through, and solve. Now, our role is to understand the effects of COVID on the community that will be permanent.”

As Director of Development, Kaiser will be going out into the community and meeting with corporations about United Way giving campaigns. He will be especially focused on needs in the community that fly under the radar of corporate giving, compared to the more-publicized issues that typically receive more charitable dollars. Examples include funding to support the United Way Financial Stability Center, as well as initiatives like the Mobile Home Tax Reassessment program that helps to prevent homeowners from overpaying on their taxes.

“Everyone has their favorite charity, but we want to take a deep dive into problems the general community doesn’t see,” said Kaiser. “Of all the various programs we run, there are a lot of things people do not think about that we need sponsorships for, and we have a lot of pockets of need that can’t be ignored. I’m looking for those companies that want to put their money into the community to ultimately fill those voids.”

With Kaiser in charge of corporate relations, Wagoner will be able to answer questions relating to financial transactions, including pledges, payroll deductions, and the delegations to each charity. Her role is twofold, however, as she also brings a passion for networking and development to the team.

“I’m not the typical accounting person,” she said. “I’ve also done special events, corporate relations, and strategic planning at my previous jobs, and I know I can help Doug in opening doors and developing the relationships I’ve made over the years.

Click here to learn more about the United Way of Chester County.

NonprofitWest Whiteland Township’s Friends of the Parks Ushers in Spring with Its Annual Egg HuntApril 14, 2021

NonprofitUnleash Your Inner Botanist at the Chester County History Center’s Spring Festival on May 1April 8, 2021