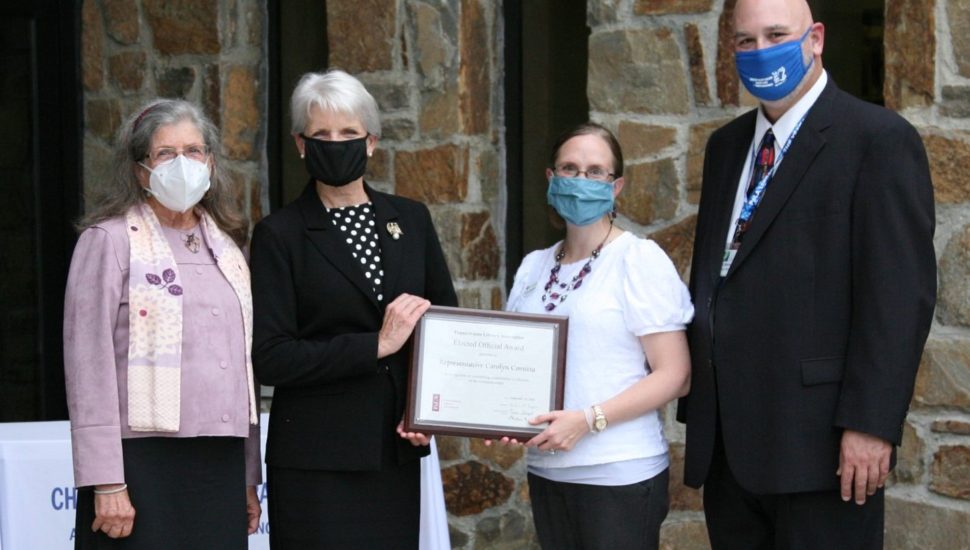 The Chester County Library System nominated the former two-term Mayor of West Chester for the award.

For more than 45 years, Comitta has been an advocate of libraries, whether as an elementary school teacher advocating for her school library, as an avid user of her local public library in West Chester, or as a voice in support of funding for all public libraries in Pennsylvania.

“Rep. Carolyn Comitta has been an enthusiastic library supporter, speaking passionately on behalf of the value of public libraries and the role they play in the everyday life of Pennsylvania’s residents,” said Kimberley Hravnik, Chair of the Pennsylvania Library Association Legislative Committee. “The libraries of Chester County, and the Commonwealth of Pennsylvania, are fortunate to have a staunch ally in Rep. Comitta.”

Comitta started her political career in West Chester. As a Borough Council member, she supported the increase of funding for the West Chester Public Library. When she became Mayor, she backed many library projects, was especially active in local summer reading programs, and always made room in her schedule for a library event.

When Comitta moved to the statewide political arena, she maintained her commitment to libraries. She still participates in the local Legislative Breakfast and often speaks on how to increase state and local library funding and how libraries should connect with elected officials.

As a Member of the House Appropriations Committee, she was permitted one question at the Education Department hearings. Her question was directed at increasing library funding in Pennsylvania, and she added her own emphasis by saying: “Libraries are an investment in our children and adults, as well as workforce development. They provide enhanced opportunities for each person, regardless of economic class, race, or gender. Libraries need, at the very least, continued funding now more than ever. I will continue to raise my voice on behalf of public libraries in Pennsylvania.”

“The Pennsylvania Library Association and its members rely on the support of elected officials,” said Christi Buker, PaLA Executive Director. “Without state and local funding support and awareness, our libraries could not support their communities effectively. We are grateful for the support of Rep. Comitta and spotlighting the work of libraries in their communities.”