Home Commerce Education As It Ushers in Its 150th Anniversary, WCU Hoists Final Steel Beam on Its Newest and Largest Building

As It Ushers in Its 150th Anniversary, WCU Hoists Final Steel Beam on Its Newest and Largest Building 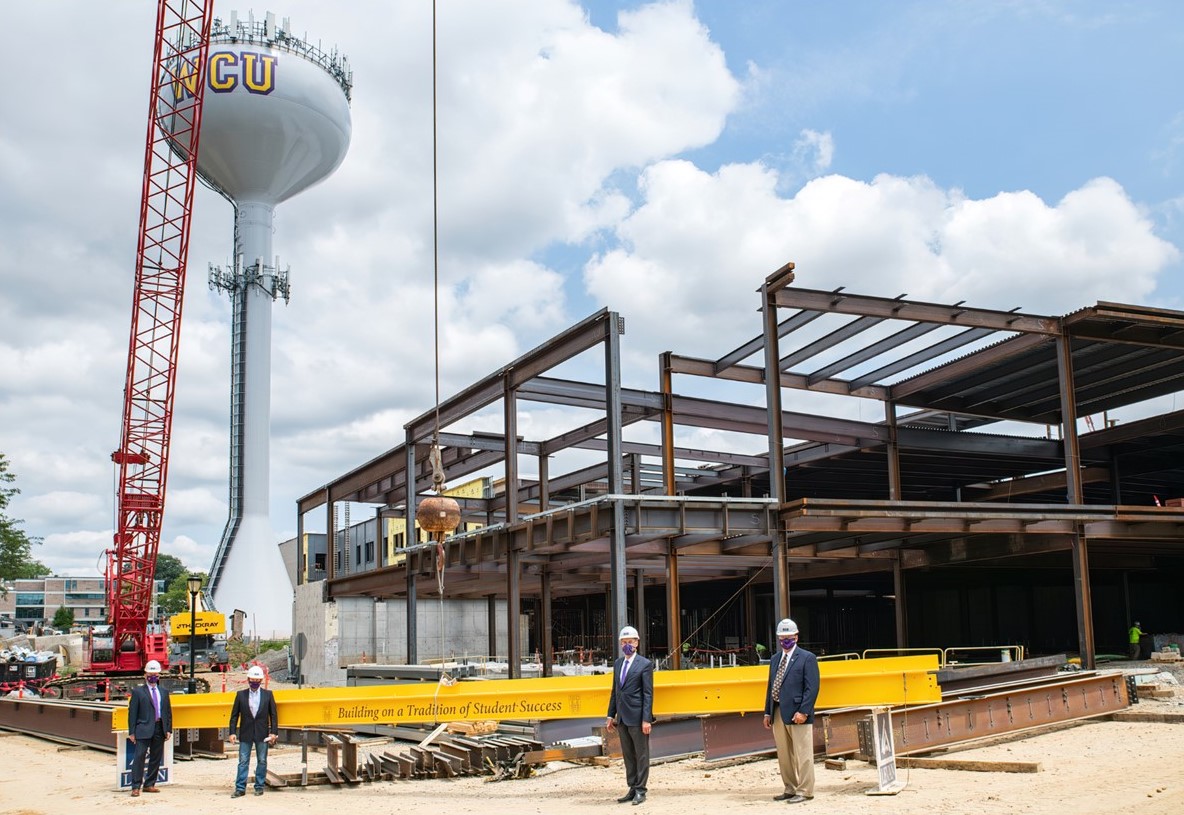 At the threshold of its 150th anniversary year, West Chester University has hoisted the last steel beam needed to “top off” the framing of The Sciences & Engineering Center and The Commons (SECC), the newest and largest building in the university’s 149-year history that is currently under construction.

President Christopher Fiorentino recently visited the campus construction site, located directly across from WCU’s Student Recreation Center along 275 North Campus Drive, to sign the beam prior to its lift and lofty placement. The project’s lead benefactors joined him to mark the historic moment and sign the beam:

Known traditionally as a formal “topping off” ceremony, the longstanding construction custom commemorates the completion of a building’s framing phase. Painted “West Chester University gold” and bearing the university’s 150th anniversary logo, the beam is the outer-most and highest beam in the northwest corner of the facility.

The building’s construction is especially timely, as STEM students are needed now more than ever to help advance and heal the world.

“Digital convergence, artificial intelligence, and advanced engineering design will make our students engage like never before and open a gateway to integrating across disciplines to present eloquent solutions to the vexing challenges of today, like COVID-19, and of tomorrow,” said Duey.

Upon completion in the spring of 2021, the $130 million facility will be home to the university’s rapidly growing health science curricula, physics, and the new biomedical engineering program, as well as expansive academic and support spaces.

“For the SSI family, the new facility epitomizes and captures the essence of our mission – putting students first,” said Carrozza. “SSI would like to commend all of the partners who had the vision to provide and the future to create. It is not just about stone and steel, it is about students and stability, students and opportunity, students and their specialness.”

Fiorentino reinforced the university’s unyielding commitment to students despite the enormity of a global interruption.

“In a year that has been nothing short of a rollercoaster for our university and our world, today is both a highlight and a triumph,” he said. “At West Chester University, nothing – not even a pandemic – will ever stand in the way of our mission of advancing student success. The Sciences & Engineering Center and The Commons will be an educational game-changer for students in the sciences, as well as for the entire campus community. Thank you to everyone who played a part in making this dream a reality.”

Recognizing that meaningful connections happen in a variety of settings, the facility will also feature a Commons – a welcoming and stimulating environment for students to gather, eat, and work. The 800-seat residential dining facility will encompass more than 16,000 square feet of the building’s entire second floor. An intentional and progressive design will encourage students to use the facility as a third space and an exciting location to meet, get a healthy meal between classes, and engage in other formative, non-academic activities.

In addition to serving students’ academic and co-curricular needs, the building will also include a 450-car parking garage.

Tags: The Sciences & Engineering Center and The CommonsWest Chester University