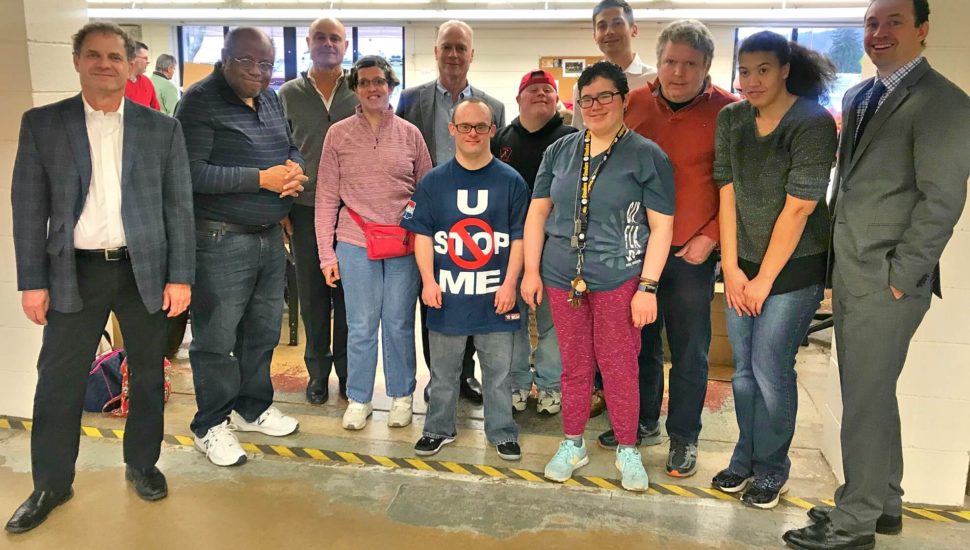 Hankin Group executives pose for a picture with members of Handi-Crafters.

Hankin Group will be the recipient of the prestigious 2019 Best Friend Award, an award given annually by Handi-Crafters to recognize and honor service, commitment, and dedication to its mission.

Based in Thorndale, Handi-Crafters is one of the largest employment and disability-focused, nonprofit work centers in southeastern Pennsylvania.

“Handi-Crafters is very proud to make this special recognition each year in the spirit of being our Best Friend,” said Amy Rice, Executive Director. “We are very fortunate and honored by the support bestowed on our operations and our mission by generous donors, customers, and corporations.

“This award grants us the opportunity to recognize incredible partnerships that truly go above and beyond in investing in our mission. The support of Hankin Group and the Hankin family has evolved over more than a decade. We are grateful in every way by their continuous dedication.”

Handi-Crafters landed on Hankin Group’s radar after the late Bob Spatola got the ear of the Hankin family and Robert Hankin. In 2012, Michael Hankin, Hankin Group’s Chief Operating Officer, joined Handi-Crafters’ Board of Directors and has been an instrumental leader ever since.

“Michael’s leadership is deeply valued on our Board,” said Brian L. Nagle, President of Handi-Crafters’ Board of Directors. “We are grateful for his professional guidance and expertise in many areas, including expansion, infrastructure, and finances.”

“It has been rewarding to watch this tournament grow from its start over 30 years ago,” said Michael Hankin. “We are pleased to direct proceeds to such an important organization as Handi-Crafters. We applaud and value the purpose and the extraordinary individuals Handi-Crafters serves and supports.”

Hankin Group has been developing real estate for more than 55 years. Headquartered in the acclaimed Eagleview Corporate Center in Exton, the company is a construction leader with award-winning projects in commercial, residential, and hospitality building.

Hankin Group not only supports Handi-Crafters, but hundreds of nonprofits through the Hankin Foundation. Since its inception in 1984, the philanthropic arm of Hankin Group has been dedicated to supporting community institutions, nonprofits, and other selective charitable efforts, both local and global. Hankin Foundation emphasizes building relationships with quality charitable organizations offering programs that make a difference.

The Best Friend Award will be formally presented on Thursday, April 25 at the Phoenixville Foundry. Tickets to attend the Annual Benefit Event, presented by Meridan Bank and Bentley Systems, will not be sold at the door. For more information and to reserve tickets, call 610-384-6990 x 201.