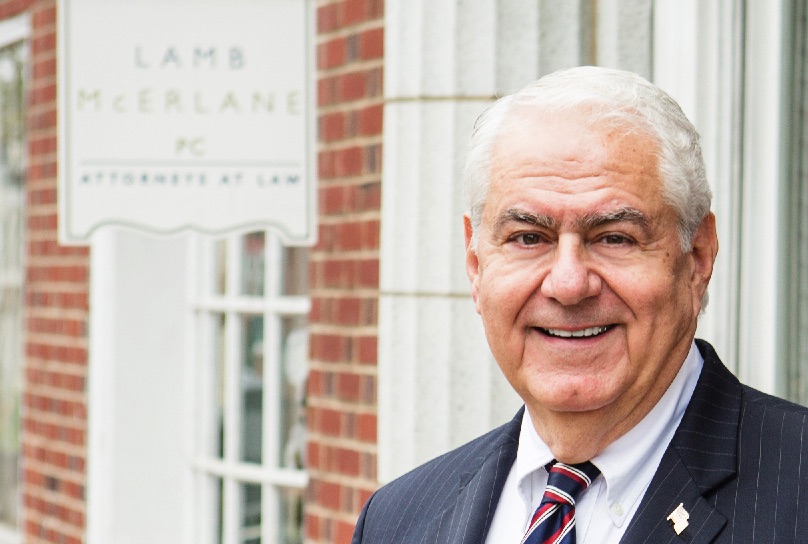 Jim McErlane, Senior Partner at Lamb McErlane PC, speaks with VISTA Today about growing up an only child in Malvern, attending Malvern Prep, then Villanova before enlisting in the Navy, and serving as a JAG in Vietnam.

McErlane talks about returning to the United States and then Chester County after his Navy service and launching a law career, his decision not to seek political office, and the impact his mother and uncle Joe Rubino had on his life and career.

Where were you born and where did you grow up?

I was born an only child in 1942 right in the Borough of Malvern. My mom was a homemaker, and my dad worked at the Bishop Tube in Malvern. My Irish father was born in Philadelphia in 1909, and my mom was born in Malvern in 1913 to Italian immigrants and barely spoke English.

I came from a bit of an unusual pairing with my parents – my mom was Italian, and my dad was  Irish, which was not common at the time. The ethnic boundaries were much stricter in Philadelphia than they were in the suburbs.

My mother dropped out of school in the 5th grade when her mom got sick to take care of the younger siblings. She would get up at 5 AM and go to the spring for buckets of water. They had no electricity or running water, just an outhouse in the back. That’s how they grew up until her parents bought a house in Malvern.

What is it that you remember growing up in Malvern that stays with you?

There were a lot of kids my age growing up at the same time right after World War II. At the time, everyone was talking about and affected by the War and the Depression. My Dad was 4F, and my uncles were in the Navy and Marine Corps. Everyone knew someone who lost a family member in the War.

How did the Depression or the War impact your family?

No one had any money! I grew up with my mother’s family. We had cousins, aunts, and uncles all within two blocks of each other. They all worked hard, long hours and did what they had to do to make a living and good home for their families.

Where did you go to high school?

I went to Malvern Prep. After I passed the tests, the school told my parents I could go there if they paid for the books.

Did you play any sports?

I played a little bit of intramural basketball, but I was never a good athlete. Although, I did have relatives who were very good. One of my uncles was an amateur boxer in the Navy, and he later became an Olympic boxing and track coach.

Unfortunately, that wasn’t me.

Did you work in high school and what activities were you involved in?

Not only was I active in Boy Scouts, where I became an Eagle Scout at 16, but I always had 1-2 jobs in high school and college. In the 50’s, my first real job was as a paperboy for the Evening Bulletin and the Daily Local. I did a route in the afternoons.

In high school, I worked at the Malvern Retreat House across from Malvern Prep every other weekend.

In the summers, I caddied at Chester Valley Golf Club, starting when I was just 13 years old. At night, I worked at a Dairy Queen a few nights a week.

In college one summer I worked construction on the Route 422 bridge over the Schuylkill River, carrying rivets to the Mohawk Indians building the bridge. We were only 75 feet above the river. The Indians I worked with had just come off a NYC bridge that went up 900 feet.

Looking back on those jobs, what are the lessons you learned that still stay with you?

You get out of it what you put into it. If you work hard, you get paid. And, if you get paid, you can put that money away in savings. Every week, I would put a few dollars away and had a sense of security that I had something to fall back on.

My mother instilled that in me, and I grew up saving money. I didn’t buy anything big with it; it was just for security. My first big purchase was a car after I graduated from law school and joined the Navy. No financing, just cash.

What colleges did you look at and where did you go?

I looked at Villanova, Penn, Temple, and West Chester. I went to Villanova. I was a pretty good student, fortunately, so they gave me a scholarship.

When did you decide you wanted to go into law?

It’s hard to pinpoint exactly when but I would say the end of high school. I read and came to believe that a classical education was the best prep for law school, so I did a Bachelor of Arts and Humanities in Political Science.  I took a few early Latin classes in college, continuing my studies from high school.

Did Villanova end up being a good choice for you?

It was an outstanding choice for me! It was my introduction to the adult world. I had never gone anywhere. My first airplane trip, I was wearing a Navy uniform. Villanova got me out of Malvern. It’s a small college, but it was big to me.

Since my major was fairly open-ended, I could take interesting courses like historical geology and the history of the earth. After undergrad, I went to Villanova Law School. 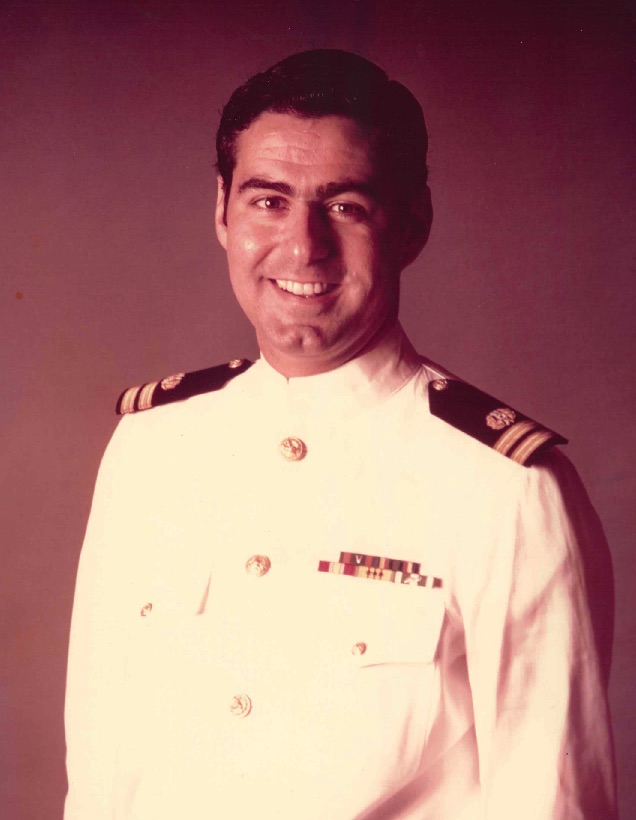 You could have done anything after college, what drew you to the Navy?

Growing up, I always assumed I would be in the service just like my uncles were. The draft was very big then because Vietnam was just getting started. Since I always had an affection for the Navy, I applied Navy Jag and served three years from 1967 to 1970 including 13 months in Vietnam. I traveled all through the southern half of South Vietnam and on the Cambodian border.

What did you take away from Vietnam that impacted your life?

On the one hand, the real mission in Vietnam, as I understood It, was not so much about the North Vietnamese but it was more about telling Russia and China to stop their forward momentum. It was very much a geopolitical war.

On the other hand, we went into Vietnam and we did not understand the people or the culture. We did not know what the hell we were doing on a day-to-day basis because we did not have any experience. If you can’t speak the language of the people, you didn’t understand the people. Fortunately, I was well-read on Vietnam when I went over there from far-eastern courses and readings I had done.

One of the poignant moments I had was reading a pamphlet written by the minister of defense in North Vietnam where he talked about fighting the French and the way he described dying frightened me a bit. The North Vietnamese viewed death very differently than us.

In talking with another guy who served in Vietnam, who had worked in Europe a good amount, he said he never worked in a foreign country before Vietnam.

What was your experience coming home from Vietnam?

I asked for and received San Diego as a duty station because I wanted to see the West Coast. There was a lot of anxiety about the war in Southern California. . I did not have any personal experience with nastiness but many people made fun of the uniform and spit on other people I knew.

Did you come back to Chester County to start your law career?

I went to a couple Chester County firms and Ted Rogers gave me a job at Rogers, Gentry, Windle, and Lamb. Ted went on to the Commonwealth Court so we dropped his name and added mine. Then Susan Windle retired in 1994. In 2003, it became Lamb McErlane PC. I’ve been with the firm since January 1, 1971.

Who had the greatest impact on your career, Jim?

My uncle Ted Rubino, who was the long-time Chester County Republican Party chair had a strong influence on me. He was an old-timer who did things his way. Sometimes it worked sometimes it didn’t He helped a lot of people. He would be out every night, going to a viewing or an anniversary party. He was a people person.

Did you ever think about running for office yourself?

Even though I have nothing but admiration for people who run for local offices, especially school board, it wasn’t for me. I’m not an out-front person. In my thirties, I thought about the State Legislature or Congress in the seventies. My uncle Ted asked if I knew what the job was and I didn’t. The next week I spent the day with a State Representative from 6 AM to 9 PM. I did that a week. I remember driving back one day deciding that I definitely did not want to be a state representative.

What are the challenges or opportunities you are focused on this year?

Well, at my age, I don’t have the ambition that I once had. I have helped build this firm over the last forty-seven years, and I hope that it will continue to attract good employees and clients. We have recruited a good number of fine attorneys and staff over the years, and they are all wonderful people.

Finally, Jim, what’s the best piece of advice you were ever given?

My mother and uncle Teddy lived by those terms. That was my guiding star. That’s always the way I approached things. If I wasn’t working as hard as I should have on something, a voice in the back of my head, probably my mother’s, would tell me to work harder or move on.

When I came out of the Navy, and I was coming to work here in West Chester, my mother joined me at the Chester County Bar Swearing-In ceremony. Someone came up to her and said how nice it was that I was going to be practicing in West Chester and she quickly said, “my son doesn’t need practice.”