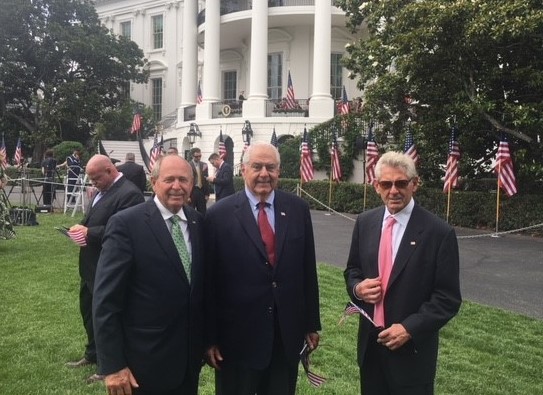 While a number of media outlets are leading the public to believe that few Eagles fans made it to the White House last week for “a celebration of the American flag with Eagles fans,” VISTA Today has found three of several Chester Countians who were there.

After the White House rescinded its customary invitation to the Super Bowl champions, it scheduled “a celebration of the American flag with Eagles fans.”

At the celebration, a reporter from Philadelphia’s NBC10 tweeted that he asked six of the fans in attendance who the Eagles’ quarterback was in the Super Bowl, and not one of them knew the answer.

Also, the Business Insider wrote: “Further examination of the event raises an essential question – were any actual Eagles fans in attendance?”

“This doesn’t look like a crowd of Eagles fans,” the online publication said, referring to pictures of the crowd in which only one Eagles jersey was visible.

Malvern residents Joe Rubino, Jim McErlane, and Tom Fillippo – who made the trek to Washington, D.C. – have a different version of the event.

“Contrary to what the press is reporting, Eagles fans were well represented there,” said Rubino.

Chester Springs resident Tim Dagit, the one with the Eagles jersey, said that he and his group of family and friends went specifically for the occasion.

“The people immediately next to our group had ties and were from a close-by town to where I went to high school,” said Dagit.

President Donald Trump spoke for approximately four minutes. His topics included the national anthem, the military, and the economy, but not the Philadelphia Eagles.