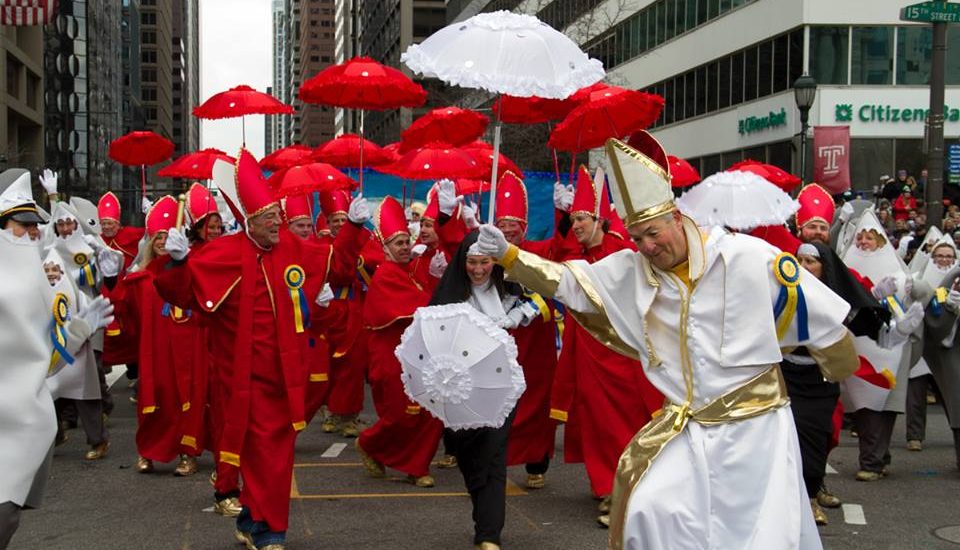 According to the Mummers Museum, the Mummers Parade in Philadelphia is the oldest continuous folk parade in the United States. And although we traditionally associate Mummers as having their roots in the neighborhoods of South Philadelphia, there continues to be a large contingent of Mummers right here in Chester County, thanks to Bud Emig of Phoenixville.

Philadelphia’s Mummers are costumed citizens who join family and friends for fun and frivolity in a New Year’s Day parade down Broad Street, and the tradition dates back to 1901.

Mummers can be traced to ancient Egypt, but it was the influx of European immigrants in the late 17th century that brought the masks, costumes, skits, and satire to the city.

Emig, who works for Long & Foster Realty, first became interested in the Mummers the year he and a friend volunteered at the parade.

“A buddy of mine in high school introduced me to the Mummers in 1976, and we eventually joined the Fancy Division in a club called Golden Sunrise,” he said.

Later, during summers at his beach house in Avalon, Emig made friends with people from Chester County and convinced them to join. They eventually encouraged friends and family to become members as well.

After 15 years, they all decided to form their own club, the B. Love Strutters, named after the City of Brotherly Love, and they elected Emig as the captain.

“Today, we have approximately 30 members who live in Chester County,” he said. “We have members in Kimberton, West Chester, Paoli, Exton, Phoenixville, and Wayne, and only a few who live in the city.

Mummers belong in clubs in one of five divisions: String Band, Fancy, Fancy Brigade, Comic, and Wench Brigade. The B. Love Strutters are one of the 16 brigades associated with the Murray Comic Club, and there are 40 brigades they compete with in the Comic division.

Their most recent win came in 2016, when they were awarded “First Place Club” for their “Saints and Finners” entry, in which members dressed in shark suits received a visit from the “Pope.” That year, Emig received the honor for “First Place Captain.”

Emig supervises the preparation and distribution of the club’s costumes during the year. On the morning of the parade, he is responsible for getting the 100 members of the club to their rendezvous location in the city by 7 AM, when they put on their costumes and makeup.

Next, they wander over to the LOVE statue for photos, before he leads them down Broad Street to find their place in line for a rehearsal.

Fortunately, Emig never has to worry about being late on New Year’s Day.

“The Hills Are Alive with the Sound of Mummers Music” will be this year’s theme for the B. Love Strutters.

“It will be a spinoff of The Sound of Music, with guys dressed in Lederhosen and the women dressed in Bavarian beer-girl costumes,” Emig said. “We have a couple of surprises, too.”

The club is dedicating this year’s performance to friend and co-captain George Siefert, who recently passed away.

New Year’s Day 2019 will mark Emig’s 40th parade and his last year as captain, but it appears he will never lose his passion for the festivities, the competition, and the camaraderie.

“I will stay with the club forever and see the tradition go on,” he said. “Over the years, I see more and more people showing up on the street for the parade — the crowds are getting so much bigger. The fun has come back to the Mummers, and we always have a great time.”

CultureChester County Home to Two of the Eight Most Exciting Suburbs of PhiladelphiaMarch 31, 2021

CultureBestselling Author from Lancaster County Inspired by Nasty Messages About Her Work to Write Her Latest BookMarch 15, 2021

CultureNew York Times: Squirrel Tables Are an Adorable Trend, and It All Started in Bryn MawrJanuary 7, 2021
Tags: