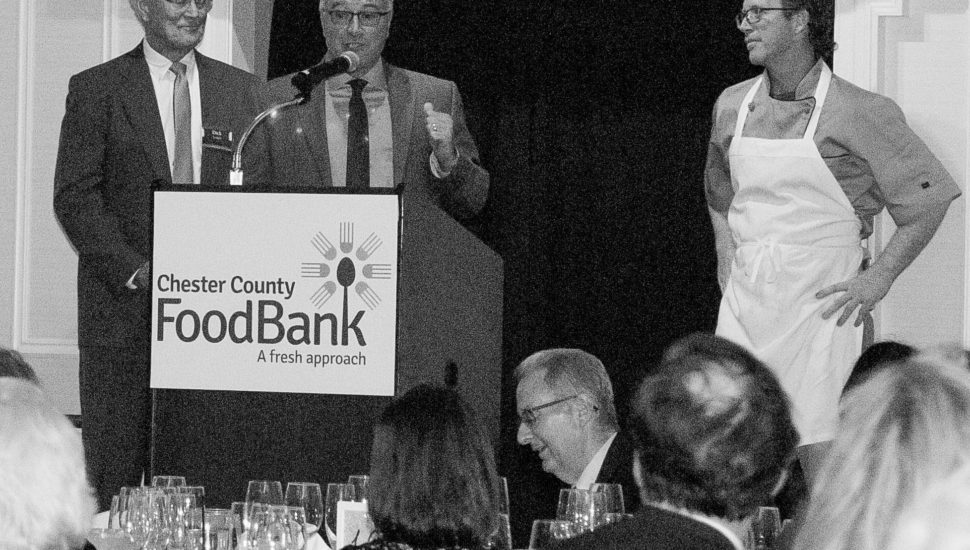 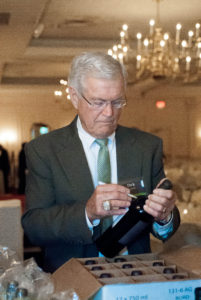 Coach Dick Vermeil and his star linebacker, Frank LeMaster, from the NFC-winning Philadelphia Eagles of 1980 weren’t the only champions in the house at the Desmond on the last Friday in April.

Not by any stretch of the imagination.

The football luminaries were joined by scores of champions of hunger relief, as the Chester County Food Bank held its fourth annual “Champions Against Hunger” dinner to thank the myriad individuals and organizations that support its mission of mobilizing the community to ensure access to real, healthy food.

“Over seven years ago, we began this work with (noted Chester County philanthropist) Bob McNeil’s vision of focusing on feeding the hungry with the healthiest food possible,” Larry Welsch, the Executive Director of the Food Bank, told guests. “Good people are being helped by the good things we are doing, thanks to you.

“Thank you for being our champions, so that we can champion for others, and for helping us take a small seed and helping it grow into something very special called the Chester County Food Bank.”

The event raised more than $300,000 for the Food Bank. The funds enable the it to continue its mission of serving more than 120 food cupboards, shelters, and organizations throughout Chester County. In all, approximately 50,000 people in the county struggle with food insecurity and, thus, rely on the Food Bank’s services.

Vermeil, who won a Super Bowl as coach of the St. Louis Rams and who now lives in East Fallowfield, graciously donated the evening’s wine from his label Vermeil Wines, which is based in his native Calistoga, Calif. Additionally, he donated a case of his Pickett Road Cabernet Sauvignon for the live auction, and it fetched a cool $5,000 for the Food Bank. 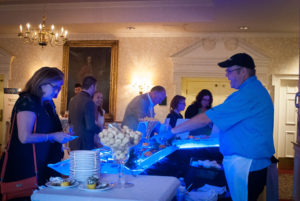 Before each course, Vermeil introduced the wine while the Desmond’s executive chef, Chris Calhoun, did the honors for the specially prepared menu.

Vermeil’s Proprietary Red XXXIV, aptly named with the same Roman numerals of the Super Bowl he won at the turn of the century, was a hit. Ditto for the oyster bar, warm sushi, Wagyu beef carpaccio, duck ravioli, New York bison, and lavender honey Bavarian mousse.

Along with Vermeil Wines, Exton’s Bentley Systems and McNeil, the founding chairman of the Food Bank, and his wife Jennifer were the presenting sponsors.

“We’re proud of our partnership with the Food Bank,” said Dan Koval, Corporate Initiatives Manager at Bentley. “We get a lot of requests for sponsorships, but no one is doing more important work than the Food Bank. It takes care of basic human needs, and we here at Bentley understand what it means to be part of a community.”

“Over 10 percent of the population in Chester County is food insecure, meaning they are without reliable access to a sufficient quantity of affordable and nutritious food at any given time,” said Citadel CEO Jeff March. “The Chester County Food Bank has made great strides to nourish our community, but we still have work to do.”

As their generosity reveals time and again, Peter Kjellerup and Mandy Cabot, the husband-and-wife founders of West Grove-based Dansko, are outstanding humanitarians with a commitment to improving the lives of others. Their nonprofit has donated hundreds of thousands of dollars to worthy causes in the Delaware Valley.