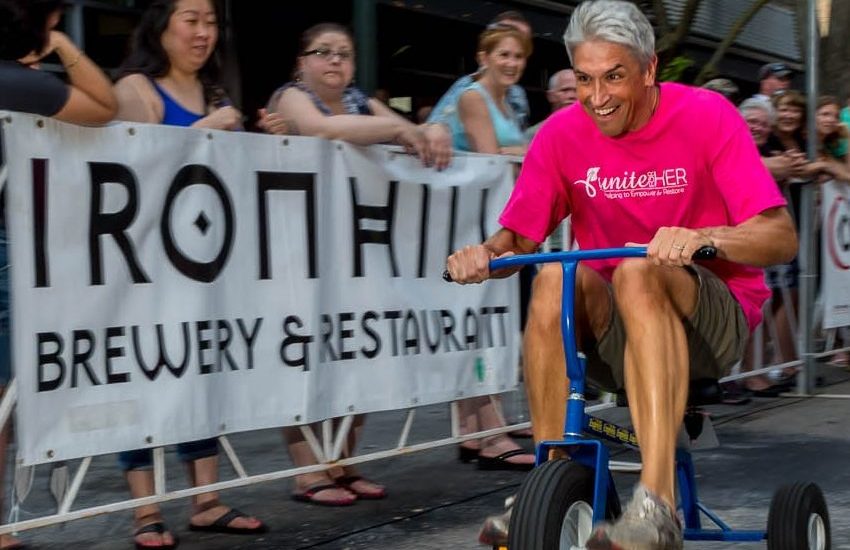 Chris Tolsdorf on his way to the finish line during the Tolsdorf Twilight Trike Challenge.--photo via Greater West Chester Chamber of Commerce.

It’s a big deal on small wheels, and the defending champions of the Tolsdorf Twilight Trike Challenge are daring anyone to try to beat them.

“You’d better bring your A game if you hope to take us down!” Dave’s Automotive Repair Enterprises (D.A.R.E.) Team Captain Laura Aloisio said.

The throwdown goes out to any business, group or organization brave enough to enter a five-adult co-ed team into the annual Twilight Trike Challenge slated for Saturday, Aug. 20.

The 4:30 p.m. showdown features “hot-handed, cold-blooded heats down Gay Street on tricycles” for the chance to have your team name engraved on the coveted Twilight Trike Challenge Trophy and win VIP passes to a lavish Crit Club buffet dinner and front-row seats for pro cycling action, the Greater West Chester Chamber of Commerce explained.

Learn more or sign up for the Tolsdorf Twilight Trike Challenge here.