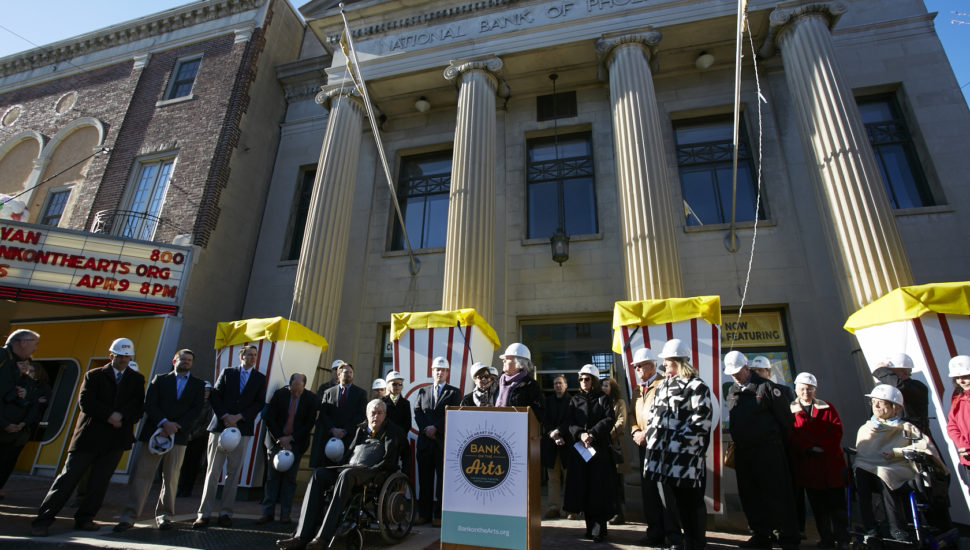 Celebratory groundbreaking for the Colonial Theatre marks the next scene in its $8 million transformation into a blockbuster show venue.-photo by Charles Bartholomew.

The hundreds of Phoenixville movie fanatics and culture enthusiasts who flocked to the Colonial Theatre for its $8 million expansion groundbreaking caught a glimpse of what soon will be a blockbuster destination downtown.

The next big scene in Phoenixville’s must-see revival is the addition of two more theaters — with seating for 100 and 60 viewers, respectively — along with an expansive lobby and concession stand, wine and beer sales, and a rooftop garden, all in a renovated historic building next door, according to Daily Local News coverage by Virginia Lindak.

“If you were to go along the four blocks here, in the last 15 years, every single one of these buildings has a new story to it. The story relates to the revitalization of Phoenixville,” U.S. Rep. Ryan Costello said in the article. “I feel that someday they are going to write a textbook about how to successfully go about revitalizing an old steel town and bring it back and enhance it and provide a cultural vibrancy and an economic revitalization that is not just good for the downtown but the overall region.”

“We have been quietly fundraising for about two years now, and we have raised approximately $5 million out of an $8 million goal for the building expansion project,” Development Director Emily Simmons said in the write-up.

Read more about the celebratory event marking the Colonial Theatre’s big plans in the Daily Local News here, and check out previous VISTA Today coverage of the theater here.

CultureChester County Home to Two of the Eight Most Exciting Suburbs of PhiladelphiaMarch 31, 2021
Tags: Bank on the Arts, Colonial Theatre, Costello, Movies, Phoenixville