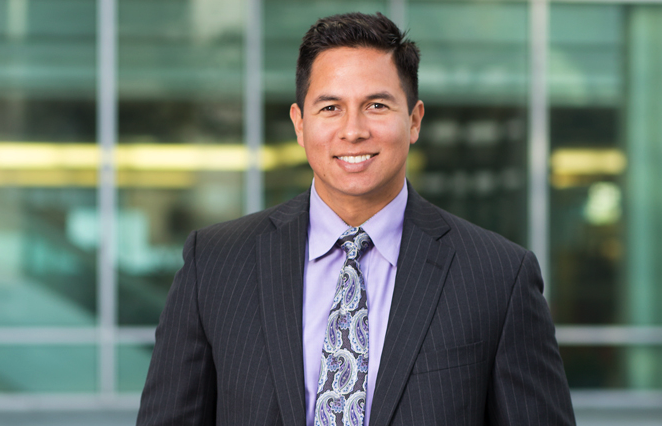 Miguel Alban, President and CEO of The Hispanic Approach and Publisher of Hola Chester County Magazine, speaks to VISTA Today about growing up in Peru, paying his way to a law degree by playing basketball and singing in a band, moving to the United States after graduation to continue his education, progressing from bagging groceries to a junior executive at the First National Bank of Chester County in under three years, how he launched his consulting business in 2012 and his view of living the American Dream.

Where did you grow up Miguel?

I was born in Piura, in the northwest section of Peru. Both my parents were sales people. My dad sold motorcycles; my mother was in medical sales. I was the oldest of three boys.

I had a lot of responsibility. We grew up in the middle class, which meant I had to work while going to school to help my mom and dad pay for law school.

What do you remember about growing up?

We were very family oriented. As Hispanics, we hung out with our extended family all the time. It didn’t matter that nobody had any money. We lived close to my cousins, and it was customary to arrive at their house without even telling them you were coming. Then every weekend our extended family would get together to eat or dance together. It’s one of the things I miss about Peru.

Did you play any sports in high school?

Since I’m tall for a Peruvian, I played basketball.

How did you start playing basketball?

When I was fourteen years old, my mother enrolled me in a swimming camp. I wasn’t good at it, and the water was coming in my mouth. I hated swimming and told my mother I didn’t want to swim. She told me I had to do some sport and signed me up for basketball. I started playing basketball, and pretty soon I was pretty good at it.

How good were you?

I don’t like to brag! I was never the biggest player on the team but I was quick and athletic, so I was always a starting guard. When I went to college, I was offered a scholarship at University of Piura, one of the top universities in Peru. To get into that school, I had to be both a good athlete and a good student as well.

Because I wanted to be a lawyer, I was studying all the time, so my grades were good. The only way I was able to attend that university though was because of the basketball scholarship. Otherwise, there was no way my parents could have afforded to send me there.

Was your college basketball team any good?

During my five years playing basketball we won several championships.

What job did you work to help pay for college?

My job in college was the lead singer in a local band called Puro Ritmo (Pure Rhythm). Every Friday, Saturday and Sunday night the band would play in different bars in the city where I was going to school.

How did the band find you?

Someone else started the band and invited me to play the drums. When the lead singer moved to another city, the leader of the band told me I was now the band’s lead singer. Being a singer in a band has helped form my personality and aided my professional career.

In my business today, I have to speak to groups and do presentations all the time. Singing in front of hundreds of people and not being embarrassed or worried about making a mistake, gave me the confidence I still use today.

Did the University of Piura end up being a good fit for you?

The school is one of the top universities in Peru. It was wonderful. I had to work hard to keep up especially seeing that I was playing basketball and working. I wasn’t in the top 10 students in my graduating class, but I did well.

What year did you graduate law school?

The structure of college and law school is a little different in Peru than here in the United States. I did both my undergraduate and law degree in five years and graduated in 2004.

Why did you come to the United States?

There weren’t a lot of opportunities in Peru. While it’s different now, back then the only way I could get a head was if I knew the right people. I always wanted to come to the United States. I moved to West Chester, enrolled at Temple and started my Masters Degree in International Law.

What was your first impressing of the United States, Philadelphia and West Chester?

It was freezing! Piura, the city where I grew up, has an average temperature of 87 degrees. I never saw snow before in my life. In January of 2005, when I arrived in West Chester, there was snow on the ground, and the temperature was 12 degrees. On top of that, I spoke no English. It was a mess!

How did you adjust?

I started school full time and got a job bagging groceries at an Acme in Paoli. Eventually, I got another job as an overnight shift manager at a CVS Pharmacy replenishing the shelves and getting the store ready for the next day. Following that job, I had the opportunity to be a Spanish teacher at Bishop Shannahan High School in Downingtown. While teaching school, I got a summer internship at a law clerk at Macelree Harvey with the help of my good friend now Lenny Rivera, Esq.. At the end of the summer, Macelree Harvey offered me a full-time job.

While at Macelree Harvey I met John Featherman, CEO of First National Bank of Chester County. Featherman and Tony Polouch, who then also worked at First National, had the vision to create a Hispanic division of the bank. I told them I didn’t know anything about banking. John and Tony said I had an understanding and knowledge of the Hispanic community, and they would teach me everything I needed to know about banking.

So in three years you went from bagging groceries to a junior executive at a bank?

How did you end up starting your own Hispanic marketing business?

When First National Bank of Chester County was sold, I went to work for The Elite Group in Exton. At Elite, I created a Hispanic insurance brokerage business, the first in Pennsylvania. Over time, I began to understand how to approach and do business with the Hispanic community. Business leaders in Chester County would invite me to grab a cup of coffee or lunch with them and pick my brain about how to market to Chester County’s sizeable Hispanic market.

Eventually, Tony Poluch, who by now had moved to Bryn Mawr Trust, encouraged me to start my own consulting company. In 2012, I started a company focused on bridging the gap between the Hispanic market and the American business world. Little by little the company grew. I landed a client in the Bronx who needed help on an international project.

What challenges and opportunities are in front of you in 2016 Miguel? 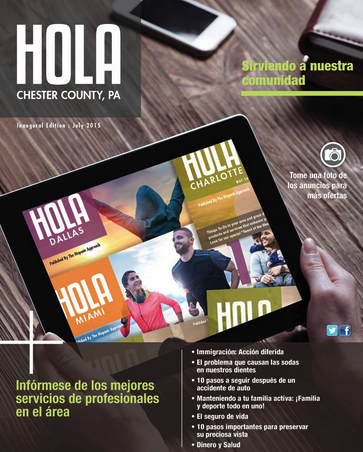 My job is to help corporate America to realize the potential of the Hispanic Community. We launched the Hola Magazine last year. Because not everyone needs consulting, but everybody needs to advertise their services to the Hispanic community.

Currently, we have Hola Chester County and Hola Tampa Bay up and running and are launching Hola Houston and Hola Orlando later this year.

The non-Latino business community needs to understand how to reach out to the non-English speaking community if they want to grow their business. The Latino marketplace is not only large and growing but has a lot of buying power and are very loyal. American business people make a mistake thinking the entire Hispanic community is poor or illegal.

In fact, just the opposite is true. Hispanics are entrepreneurial minded, eager to succeed, hard working and loyal. Their passion to have a happy, prosperous life is what brought them to America in the first place. If they were lazy or didn’t have a desire to succeed they would be back in their home country. They are here to work hard, take any job, do the right thing, grow their families and do business the American way.

What is the best piece of advice you ever received Miquel?

My mother told me a couple of years after I moved her. I don’t care what you do, what work you have or who you are, just be sure she said, that everything you do, you do with passion. She said that if I woke up every morning passionate about what I was doing, I wouldn’t be working but rather working toward accomplishing a dream.

She also told me the route to success is a marathon, not a sprint. Life is not about taking an elevator to success; rather life is like a stairway that has to be climbed one step at a time. You have to work hard, even get punched in the face occasionally, but to keep moving up the stairs. If in the end, you don’t reach your dreams, you have the satisfaction of knowing the journey to do all that was worth it.