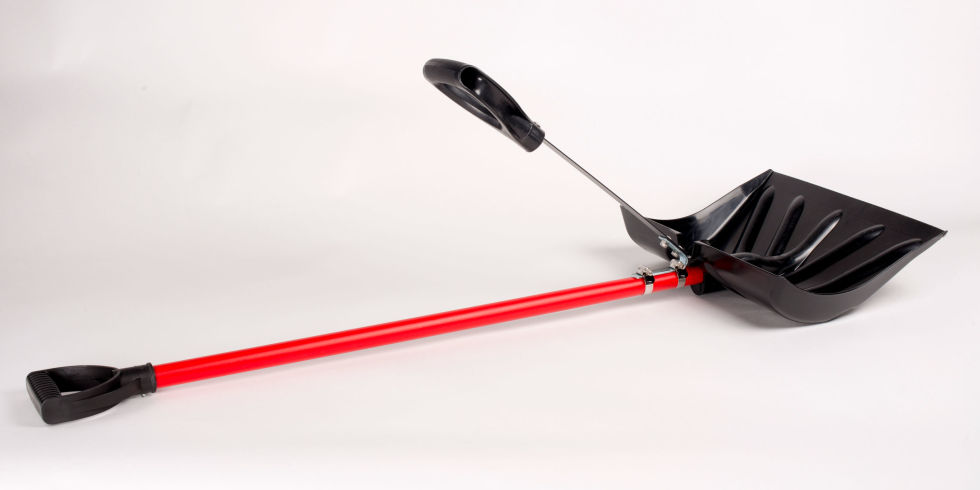 The shovelution's second handle transfers strain from the lower back to the upper body.--via Popular Mechanics. The shovelution’s second handle transfers strain from the lower back to the upper body.–via Popular Mechanics.

Not only is shoveling time consuming and tiring, every year more than 11,000 people in the country end up hurt while trying to clear their yards and driveways.  To solve this difficult problem, Downingtown based Ergo Analytics has managed to find a way to make the activity both less tiring and safer for your back through its Shovelution lifting assist.

Andris Freivalds, a Professor of Industrial and Manufacturing Engineering at Penn State University and author of Biomechanics of the Upper Limbs, has spent 35 years professionally testing and evaluating shovels.  Talking about the Shovelution, Freivalds explains that “while the bent handle shovel can allow the user to keep a straight back, the shovel itself tends to twist and shimmy during lifting and throwing. This can actually make shoveling less efficient and more difficult.”

However, “when attached to a straight handle shovel, the Shovelution facilitates controlled and efficient shoveling, as well as maintaining a straight back. It is my ‘go to’ tool for shoveling snow.”

Popular Mechanics agrees, as they have named Shovelution as the Best New Tool in their January edition. The simplicity of the spring loaded Shovelution makes it easy to attach it quickly to any straight shovel. Its regenerative braking mechanism utilizes the force of each throw to decrease the effort necessary for the next throw, minimizing both the work time and tiredness.

As this addition makes it possible to shovel without bending, the risk of back injury is significantly lowered. In addition, as the muscles utilized are the strong muscles of the chest and upper body, the strain and possible injury to some of the weaker muscles of the arms is also reduced.

The Shovelution, which is fully assembled in the U.S. with nearly all of its suppliers, components, and subcomponents also produced and procured in the country, is not only used for snow. Come spring, the ease of transforming it to gardening or landscaping shovel or fork can save a lot of time and energy, and most importantly, the strain on the users back.