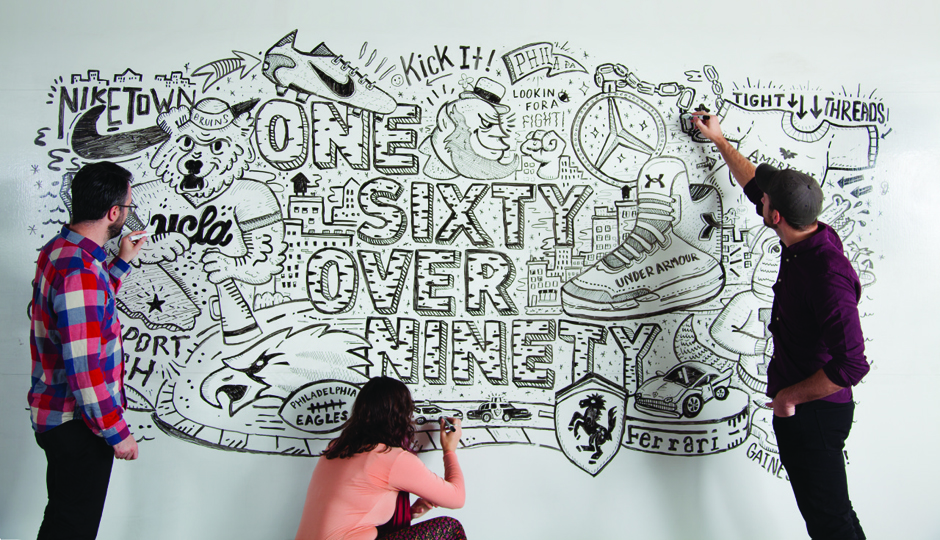 Artists and creatives at 160 Over Ninety, which also made the list.

Garnering national — or international — attention, playing with cutting-edge technology and altering the business landscape are each just plain cool in their own right. But four Chester County businesses have pioneered those frontiers to perfection, placing them among the elite honored by Philadelphia Magazine as Philly’s Coolest Companies 2015. West Chester-based QVC is home to 2,800 local employees and 17,000 globally, and “while TV home shopping seems like something the Internet age would have chewed up and spit out, QVC continues to thrive. (It’s an $8.8 billion empire.)”

That’s due, in large part, to the network’s prominent personalities, including “Shark Tank” star Lori Greiner, and a growing reputation as the “place where entrepreneurs succeed,” the article stated.

The similarly far-reaching prescription drug distribution powerhouse AmerisourceBergen employs 900 employees in Chesterbrook and a total of 16,000 who span the globe.

“By providing distribution services, generic medicines, over-the-counter products and equipment to hospitals and pharmacies, it handles some 30 percent of the world’s pharmaceuticals and rakes in $120 billion in revenue a year,” the article explained, all while prescribing plentiful benefits and amenities to its workforce, including “tuition reimbursement, dry cleaning, fitness classes and car-wash services, plus monthly kaffeeklatsches with the CEO.”

Innovation has clearly marked the rise of Victory Brewing Co. in Downingtown, whose workforce of 342 takes advantage of the latest quality control technology and market trends.

“What started as a microbrewery has turned into a regional industry leader that delivers 125,000 barrels of beers like Hop Devil and Golden Monkey a year to 34 states and countries that include Australia, Germany, Italy and Japan,” the article noted.

Finally, Evolve IP in Wayne made the list as a smaller, 180-person company with an oversized punch. “Despite playing in the same field as behemoths like Microsoft and Amazon Web Services, Evolve IP has grown more than 170 percent in the past three years, has more than 1,300 clients (big names include Virgin and Christian Dior), is expecting to finish 2015 with $70 million in revenue, and plans to add up to 80 more employees over the next two years,” Philadelphia Magazine stated.

Read more about Chester County’s role among the coolest Philly companies, as well as the rest of the Philly’s Coolest Companies 2015 list, in Philadelphia Magazine here.