In Chester County, a Weekend Paradise for Philadelphia Brewpub Enthusiasts 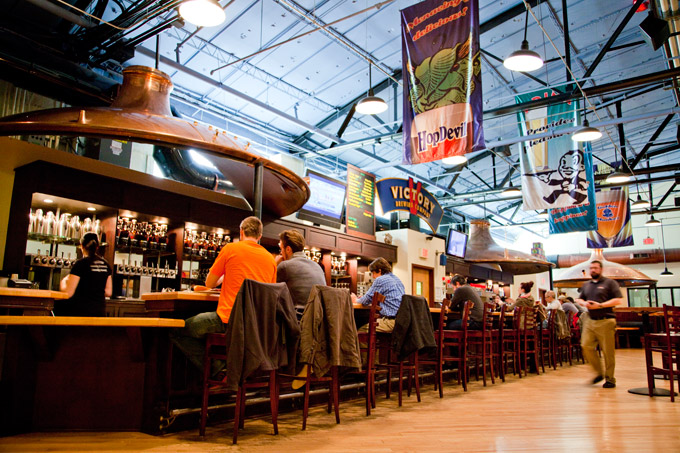 Victory's Downingtown Brewpub pioneered the concept of great beer and excellent food in the States.--photo via Philly.com

Even with new brewpubs pouring into the market in Chester County and throughout Philadelphia, the state Liquor Control Board is cranking open the tap to serve up more to a thirsty public. “It’s an investment in our community,” Victory Co-Founder Bill Covaleski said in the article.

Industry newcomers have literally poured in since 2011, when the state’s scant 24 brewpubs were pioneers for today’s soon-to-eclipse 100 establishments.

“Many of the best are quirky and creative, serving thoughtfully prepared menus that, in the suburbs, offer a handcrafted alternative to the chain food culture, and in the city, capture the diverse character of emerging neighborhoods bristling with youthful energy,” the report stated.

And the state wants the industry cup filled to overflowing; the Liquor Control Board has made it easy for microbrewers to open up tasting rooms and satellite “storage facilities” for direct sales, compared to much more stringent regulations in New Jersey.

And brewpubs are an effective way to go. Boxcar Brewing Co. in West Chester, for example, sells 90 percent of its beer from the tap, where a $100 wholesale keg can bring in $500.

“Where there is a more advanced craft brewing scene, you’re going to see more brewpubs,” nationwide Brewers Association Chief Economist Bart Watson said in the article. “It’s a great way to differentiate yourself as a scene gets more crowded.”

Read much more about the state’s brewpub scene and the local players on Philly.com here, and check out previous VISTA Today coverage of craft brewing developments here.