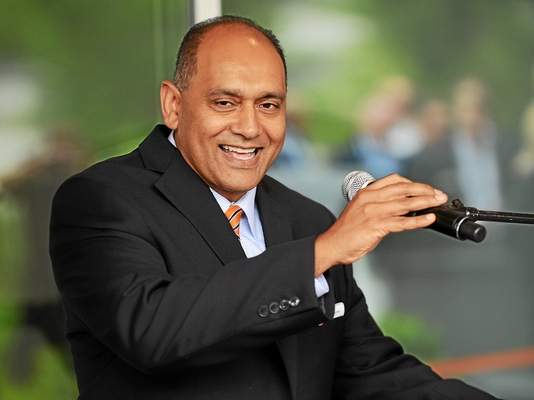 Despite the threat of rain, a delegation of local representatives and company officials gathered on Tuesday in Malvern for the ribbon cutting ceremony at the opening of the new U.S. headquarters of the sensors and controls developer and manufacturer, ifm efector. US Congressman Ryan Costello was there to help cut the ribbon.–Photo via Pete Bannan, Daily Local News

Based in Essen, Germany, the company first established its presence in the U.S. thirty years ago, and has enjoyed rapid growth ever since, so much so, that its previous 35,000 square foot U.S. headquarters on 782 Springdale Drive in Exton, became too small to house the entire operation.

Chester County’s three commissioners, State Representative Warren Kampf, state Senator Andrew E. Dinniman, and U.S. Representative Ryan A. Costello were present at the ceremony for the opening of the new cutting edge building. The son of the founder of the company and chairman of ifm electronic gmbh in Germany, Michael Marhofer, also joined the festive occasion.

The new headquarter is located in the Atwater Corporate Center where the building spans 45,000 square feet. Company officials were proud to showcase some of the new state of the art technology and facilities within the building, such as adjustable desks for sitting or standing, open-air interior, a workout room, cafeteria, and a terrace equipped with barbeques for hosting informal gatherings.

The new headquarters will be the home for more than 100 of the 230 U.S. ifm efector employees nationwide. The company is also looking to expand by adding at least 75 new employees in engineering, information technology, finance, and marketing over the course of the next seven years. The company produces 9 million sensor and control products annually, including proximity switches, vision sensors, photoelectric sensors and pressure sensors.

The rest of the company’s U.S. employees work in branch offices located throughout the country serving over 20,000 ifm customers annually, with locations as wide ranging as Atlanta, Chicago, Dallas, Detroit, Los Angeles, Cleveland, and Philadelphia.

Roger Varma, CEO of ifm efector USA, has been with the firm over 20 years, and said during the ceremony that the market for the company in the U.S. is promising. He noted the segment has an annual output of $1.5 trillion, pointing out that it would make it the eighth largest economy in the world if it were a country.